Temple Of Dendera....Off The Beaten Path

Off the beaten path about an hour from the city of Luxor, is the Temple of Hathor at Dendera. Built in 1st century BC it is one of the best preserved temples in all of Egypt. Ptolemy VIII and Cleopatra II had the temple built and later Romans Emperors continued to decorate it in honor of the goddess Hathor. The complex covers some 40,000 square meters and is surrounded by a thick mud wall. 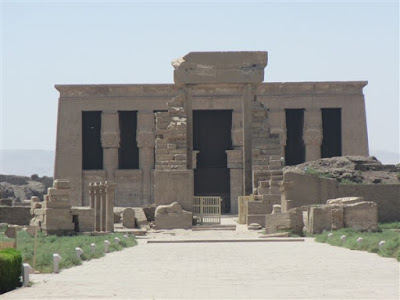 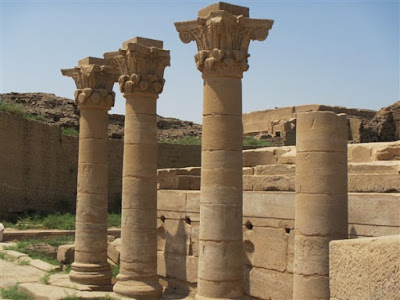 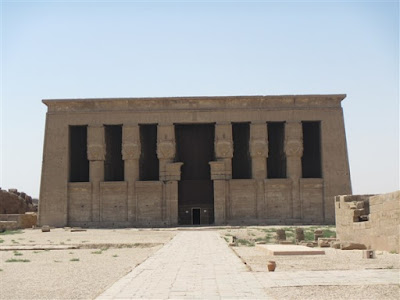 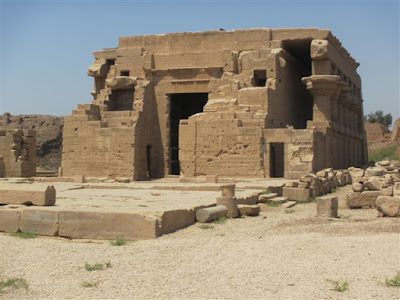 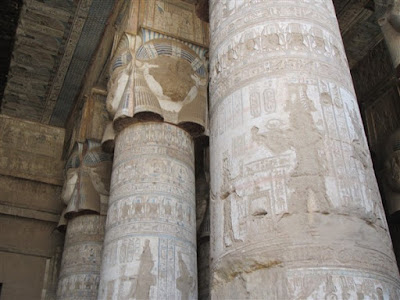 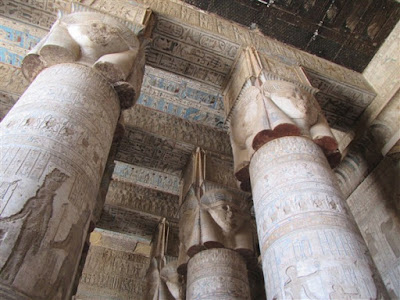 Currently The Temple Is Being Cleaned So Wherever The Paint Colors Are More Vivid It Has Already Been Cleaned, A Long Painstaking Process 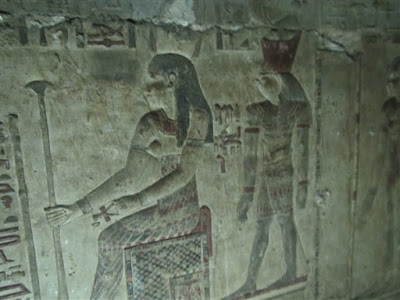 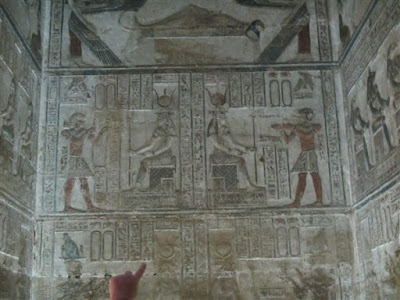 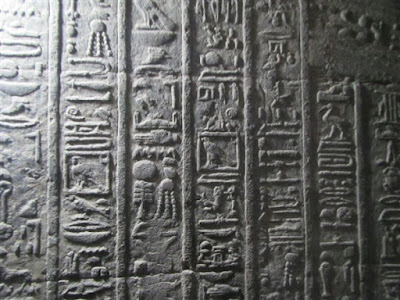 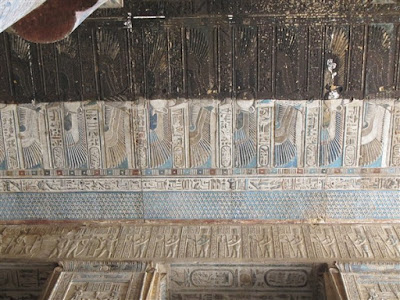 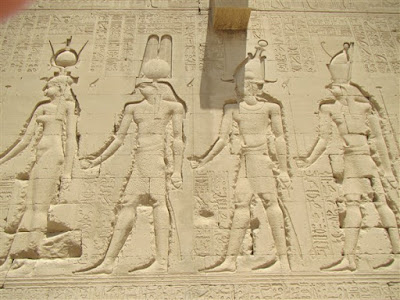 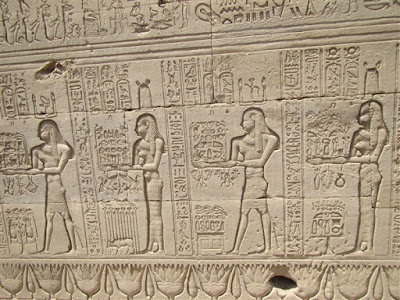 Cleopatra had a palace on the grounds that included 29 rooms, 10 bathrooms and even a swimming pool that was posh enough for the Queen. Hathor temple is the only one with more than one level, but the upper level was closed off some years back when an American jumped off the roof. We were even allowed to crawl down into the crypt to explore the creepy tunnels of the underground world. 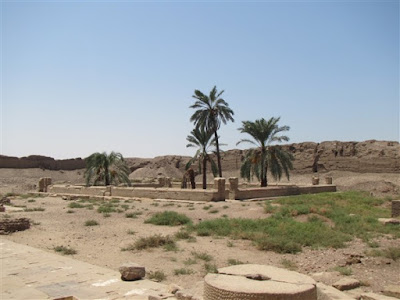 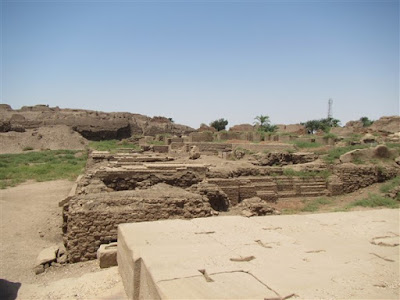 The Ruins of Cleopatra's Palace 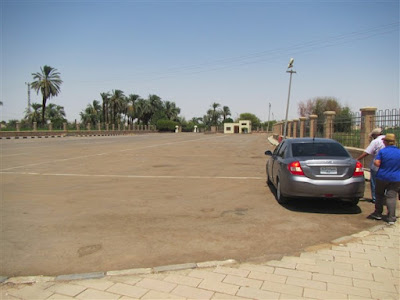 
As our driver made his way out of the temple complex we passed by a police security checkpoint commonly seen throughout Egypt. The policeman and military officers chatted with the driver and guide inquiring about who they had in the back seat. When we were touring Cairo our guide there said it was much easier to tell the police that we were from Canada, as less questions would be asked. But this time we heard the driver say the word, "American," to which the police officer looked perplexed and repeated the word. The officer waved to a car behind us allowing them to pass by but kept our car on the side of the road. Clyde asked our guide, "what's going on, " and when he answered, "I don't know," we began to worry. 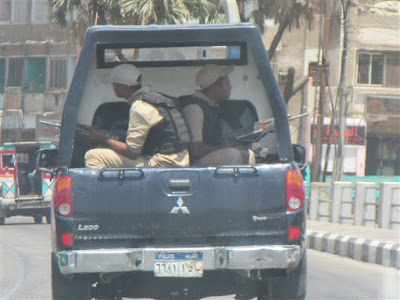 
But a few minutes later our car was allowed to proceed, as we followed behind a pick up truck with two policeman in the back. They were each holding rifles that were pointed out the window, again a common sight here, but why were WE following in this manner?

Still concerned Clyde questioned our guide again. "Are Americans considered to be trouble and not liked in Egypt," he asked? Our guide said, "no, just the opposite." He went onto explain that we were being given a police escort to protect us, because if something happened to Americans travelling through Egypt it might hurt relations between Egypt and the US. So in other words we were being treated as royalty.

We followed the police into the nearby city of Qena where we stopped for lunch at a famous restaurant. That was the last we saw of the police as we walked into the restaurant for our meal. Our meal choices were either chicken or pigeon (yes pigeon, the bird). Each meal came with tahini and bread, salad, rice, lentil soup, cooked vegetables, a bottle of water and even pudding for dessert. It was all very tasty but messy, but not to worry since there was a hand washing station nearby. 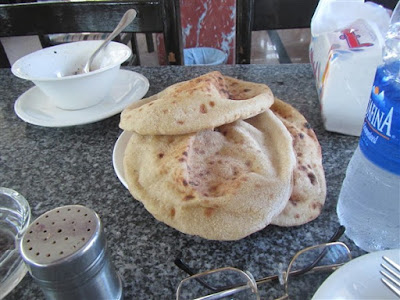 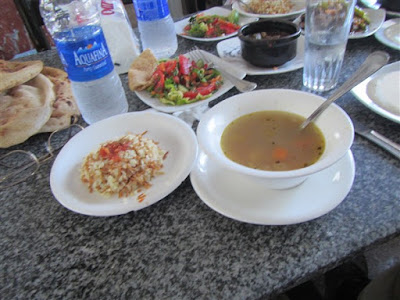 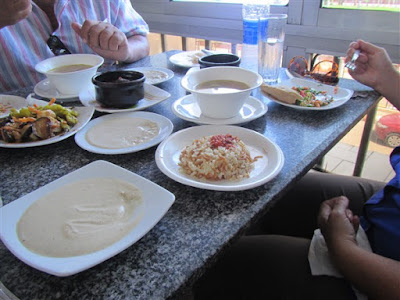 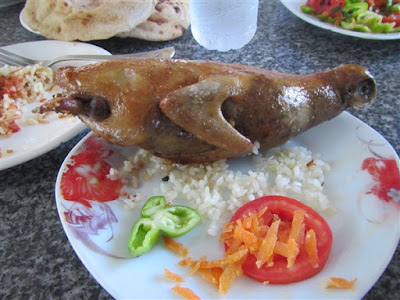 Yep!  That's a pigeon! Clyde's Lunch It Was Stuffed With Rice


With full tummies we relaxed on the long ride back to Luxor in the back seat of the car. Since we are renting a house on the West Bank of the Nile we were dropped off at the National Ferryboat dock. In the midst of hundreds of robe, clad Muslims we paid our 1 Egyptian Pound (equal to 57 cents) and boarded the large ferry with plenty of bench seats. The ride across the Nile takes about ten minutes and from there we were picked up by the manager of our house with a car. 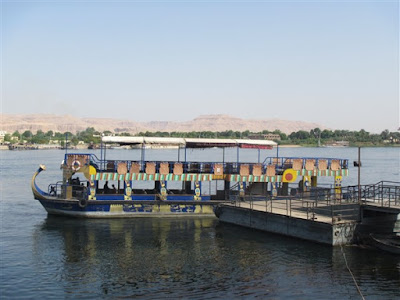 Ferry Boat To Get Across The River, Price Is 1 Egyptian Pound (57 cents each) 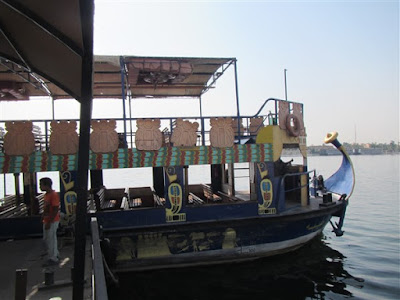 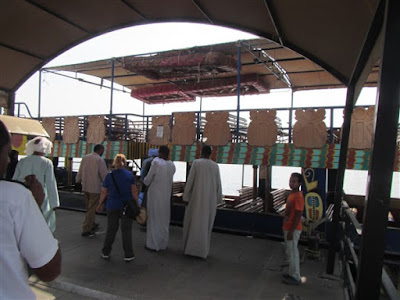 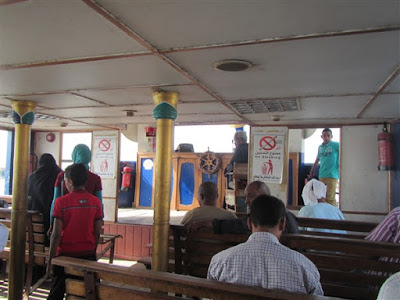 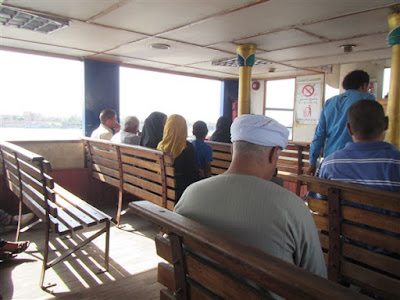 Another day of temple hopping, police escorts, usual tastes and ferry rides across the Nile.....along the gringo trail.