What A Difference A Year Makes.....

Yesterday was the second time we celebrated my birthday while living in Panamá, which makes it sound like we've been here so long.  Last year on my birthday we were in the Department of Migration in Panama City with our lawyer to initiate the process for our visas.  But since Clyde didn't have his original passport having lost it a few weeks earlier if you remember, only I could be processed through.  I remember this distinctly because the woman doing my paperwork wished me "feliz cumpleaños" with a big smile.

But to think how much has changed in just one year!  Yesterday we went out browsing through some stores in La Chorrera and vicinity and picked up a few things.  Stopped at a Subway for lunch and started to have those feelings of "oh no, will I know how to answer all the questions?"  Those questions like "what size sandwich, what type of bread, what type of cheese, what vegetables did I want and not want, what type of condiments, did I want the combo or sandwich alone?"  But remarkably, it was so easy this time around.  Bet you never thought that ordering food at Subway could be a daunting task, did you?  Before leaving Subway I stopped to use the "bano" and saw something that impressed me which is quite unusual for a bathroom here.  A poster on the wall put out by the Ministerio de Salud, or Health Department listed the steps to proper hand washing.  With colorful pictures it instructed patrons to wash hands with soap and water then use a paper towel to turn off the water and to open the door.  Of course bathrooms here only have cold water in the sinks, but at least it encouraged hand washing.

In the past year we'd have to say that the language has come a long way pretty much by just living here.  We haven't spent time working on our Spanish lately, at least not the book knowledge.  But we do keep a dictionary with us in the car and look up unfamiliar words as we see or hear them, hoping to be able to remember them. And watching the occasional short amount of time on the television in Spanish has helped too.

Found this cute video below:
http://www.flowgo.com/funny/1750_im-too-sexy-my-granny.html
To celebrate my birthday we danced the night away to the live music of "Poco Locos" at a restaurant in San Carlos.  This popular local band made up of mostly gringo expats, packs the house every where it performs.  Last night was no exception as they performed many oldie favorites from the past decades.  So to those that wonder what grandma and grandpa are doing in their retirement years here, some are jammin' in a band under the stars.  And others like us are swing dancing to the beat, bumping butts with other gringo grandparents.  We sure are rockin' through our retirement years but it's on the dance floor and not in a rocking chair. 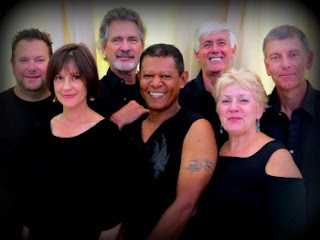 Poco Loco's Band Of Mostly Expats And One Local Guy
And for a quick update on the chickens.....Clyde just went outside to feed them and noticed that one had escaped from the pen.  Once our watchful doberman Venus noticed it, she ran over and started poking at it and circling around her.  Perhaps she's just looking for a playmate since she made no attempt to eat the thing.  But then again this is the same dog that didn't realize there were chickens on her property for two days after we got them.  The information we read stated that dobie's rank 5th as far as intelligence among other dogs.  But apparently Venus never read that article or perhaps she just takes after her female owner and has some blond tendencies.

CLYDE HERE:    I have built "my version" of a chicken tractor.  This will allow me to move the chickens around as they eat the grass and poop in one area.  Remember, half of these chickens belong to my friend Daniel.  He is trying to get his chicken tractor done.  Anyway here are some pictures. 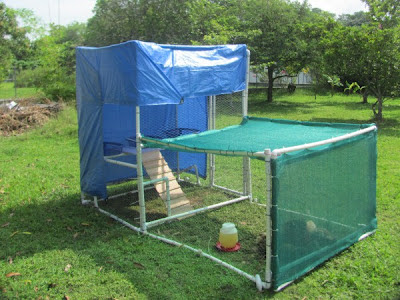 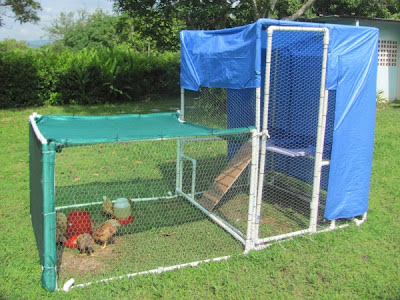 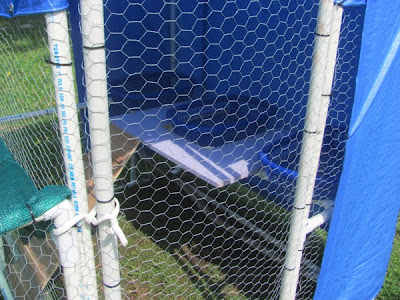 Hay will be put in these for laying eggs 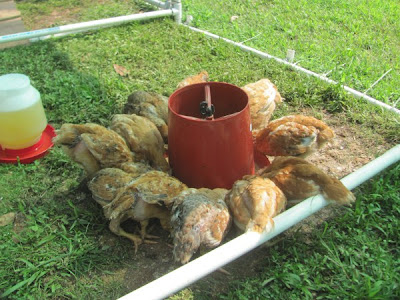 Yes, they are practically teenagers!
﻿
Clyde is busy looking for wood to buy to make new kitchen cabinets. Wood here is sold in log form and then has to be cut, planed and left to dry.  But in an environment with year round, high humidity, it's nearly impossible for anything to dry properly.  He went in search of anyone in Panamá that has kiln dried wood, but will have to have it shipped in from the other end of the country.  It's more costly but hopefully will create a better product in the long run.  Furniture here is made from wet wood and as it dries it tends to crack and split causing problems.  And since termites love to dine on wood, only teak and cedar seem to be used here.

Clyde is outside mowing the street with his riding mower, as the neighbors look at him in awe.  Grass grows so fast here we can practically watch it grow, and it needs constant upkeep.  A bit of cloud cover is making it a bit cooler, although there's no breeze at all.  But after two large cups of hot, strong coffee I'm sitting here glistening in sweat.  Time to enjoy a cool shower and get on with this day, although I have no idea what may come our way....along the gringo trail.