We took off to go exploring yesterday but soon after we left the phone rang.  It was Alexandra from the lawyers office who asked if we could meet with her and go to Migracion-Panama as they call it here to start the process for Clyde.  She was able to get a copy of the entry stamp along with a computer printout of the exact days, times and airlines that he used to come in and out of the country.

The front of the Migracion Oficina 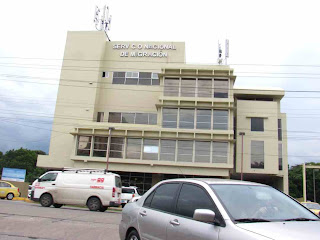 ﻿
Since Clyde was wearing shorts he brought along a pair of slacks to change into, just in case she called.  So while I'm driving down the Pan-American highway he's pantless in the passenger seat changing into long pants.  I was wearing a casual dress and sandels so I was presentable.  Panamanians are very formal people and shorts are not accepted everywhere. Any government buildings, banks and many restuarants do not allow people in wearing shorts or beach wear. 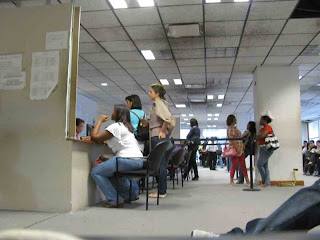 The process went pretty quick for him, the same process that I went through the day before.  Next she took us to a different office, a medical clinic with several doctor's and dentists so that we could pay the legal fees with a credit card there.  We didn't understand why a lawyers office could use the same credit card machine as another totally differnt office,  but then this is Panama.  Once we got back into the car Alexandra explained that this clinic is owned by the husband of Carla, the lawyer she works under.  Oh....now we understood.  Carla is one of the partners in this law firm and her husband is a doctor that owns a clinic. 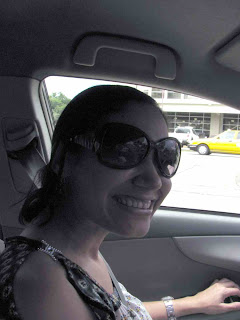 ﻿
Back to the lawyer's office we went to fill out more paperwork.  Alexandra tells us that in about a week we will have a "temporary visa," and should be able to start getting  discounts with this card.  This will be our temporary resident visa while waiting many months for the permanent one.

After leaving Alexandra we took off to find Price Smart, a membership only warehouse club similar to Sam's Club, or Cosco in the US.  In fact this store looked like any US store, except for some of the foods. So here we were buying a membership to this club for $30 not knowing much of the language.  But we muddled through it and all went fine.  We stocked up on some paper products since I was thrilled to find Bounty paper towls and Charmin toilet paper, both something we had not seen elsewhere here.  The paper towels that we'd been using are thin and fall apart leaving little specs of towel on everything.

After that we were starving, since we only ate a few crackers for lunch.  We stopped at a restaurant called "Don Lee," a Chinse food chain that we'd seen in our travels.  So this would be our first taste of Chinese food, Panamanian style.  I didn't care what we ordered as long as it came with an eggroll, or we could order one of the side.  But first we had to figure out how to say eggroll in Spanish.  We stood at the counter looking at the menu and pictures with it.  Some of the meals included a "rolla" which I figured out must be an eggroll. Then I looked further to see they had sides of "rolla de pollo," (chicken eggrolls), "rolla de carne," (meat eggrolls) and "rolla de vegetales," (you guessed it....veggie eggrolls).  So Clyde proceeds to order a meal of chicken, rice and veggies with a side of pollo de rola.  The girl taking the order looked confused and said "que....what."  He kept repeating himself when the girl looked at her manager who said loudly ro-yah.....since an LL combination in Spanish is pronounced like Y or ya.  Of course we knew that from our year of Rosetta Stone.  Clyde blamed me for making him look silly since I was saying it wrong too.  Oh well, we'll remember that word forever more.

Then we were given a receipt and had to wait until our number was called.  Our number was 543 which would be cinco, cuatro, tres......or cincocientos cuarenta y tres.  Clyde took off to find the bathroom leaving me to hold the receipt and listen for our number.  I kept repeating these nunbers over and over in my head so I'd respond when they were called.  We got the food and ate very little of it, since we don't eat much after weight loss surgery.  We took the food home to eat today, got stuck in very heavy traffic leaving the city and didn't get home until 8pm.

As I lay in bed last night thinking about the day I realized how we are more and more immersed  in the language.  It's scary sometimes yet exciting too because we are learning it just like a child learns his or her first language.  It's everywhere filling our brains.   I told myself and Clyde that we really need to make more of an attempt to speak Spanish, even to those Panamanians that do speak some English.  And even to each other!  So let me go get Claudio's butt out of la cama (bed) and get the day started.  Actually he's sitting behind me waiting patiently for me to get done on the lap top so he can use it.


We have no plans for today as of yet......but I'm sure that wherever we go and whatever we do there will be a story in it, as these two loco gringo's go exploring along the gringo trail.
at September 17, 2011