Living in Panama is sometimes like living on Green Acres.  You remember that show from the 60's where they had to climb the pole to use the telephone?  Since we got our appliances installed it's been something like that here.﻿

Clyde was so happy to finally have hot water and be able to take a hot shower, but it's not that simple.  We heat water here with propane which we also use to cook and dry the clothes.  We only bought one propane tank. Clyde was planning on buying a second one to have one inside for the stove and dryer and another outside since that's where the on demand hot water heater is installed.  The man that installed all of these told us not to leave the propane bottle outside because it would get stolen if it could be seen.  And he was a Panamanian telling us this.  Clyde paid $80.00 for the propane tank but the gas cost a mere $5.00.  So although the tanks have value propane gas is very cheap here.  The installer told Clyde that people here steal the tanks and return them to any gas station that has them for $85.00. So for a Panamanian that only makes $300.00 a month, it must be worth stealing the tank and making that much money. 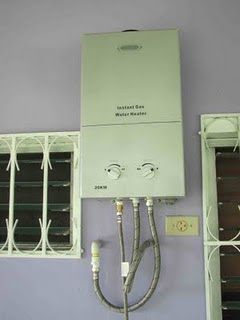 ﻿
So every morning when we're ready to take showers Clyde takes the tank right out the door and connects it to the water heater.  Then we were told since there's not enough pressure here we need to run the hot water in the kitchen to let the pressure build before using hot water in the showers. So I get into the shower and turn on the hot water first.  Out comes a trickle of water but after a few minutes it does get hot.  As soon as I turn on the cold and start to shower the hot water goes off and I'm back to taking a cold shower. The hot water comes and goes during the shower process.  And many times in the mornings here the water goes out totally.  Perhaps since everyone is getting ready for work and school and using water at the same time.  It usually comes back on after a while.  One day we were both taking a shower at the same time (we have two showers) and the water went off totally.  We just had to stand there a while until it came back on so that we could finish.  After showering Clyde brings the tank back into the kitchen where it sits in between the stove and washer/dryer combo. Once his tools arrive from the US with our other stuff he plans to build a box outside to hide a tank there. 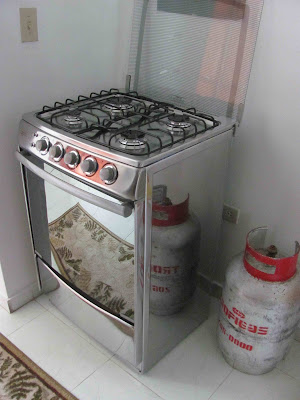 ﻿
At first I thought so this is the way we have to live here?  Then I had a flash back to our last months in Texas. We had become obsessed with watching International House Hunters on HGTV. We would DVR it and that was what we watched every night.  If you're not familar with the show it's where a realtor shows someone, usually an American 3 houses in another country and they chose one to buy.  It's fascinating to see how people live in other countries.  Not all houses are square.....not all kitchens are inside the house, some are outside......some living rooms are outside.......some houses are round......some have the living room and kitchen upstairs and the bedrooms on the first floor......some have bathrooms outside.......in some countries the kitchen goes with you so a kitchen is a totally empty room.......un-furnished in some countries means no appliances, sometimes it also means no mirrors or light fixtures......and on and on......  We even got to watch several episodes on Panama with budgets from $500,000 in the old part of the city Casco Viejo to a million dollar budget on the Pacific Ocean.  In many of those episodes the realtor would tell the prospective buyers things like........everyone has generators here since the power goes out alot......everyone has water tanks on their homes to catch rain water in case they need extra water........furniture here is extremely expensive so plan on having yours shipped from the US.......and more.

So the point that I'm trying to make here is this.  Life is not the same everywhere.  I don't mind taking cold showers and if there's a trickle of hot water that comes along, all the better.  We came into this move to Panama with open minds and realized that we might have to do away with some of our American luxuries in order to live here.  We moved here to try and live cheaply and for a different way of life.  Both of us are now thinking that we really don't even need the air conditioner.  It's been over a week and we have not heard back from the installer.  I'm sure they'll call us someday and then we'll have to make that decision.  We have gotten used to living without air conditioning.  YES that's right......NO A/C because the temperature goes down to 75 at night and only warms up to 85 or so during the day. We do have a fan that we sleep with that helps to block out outside noises like bugs,  wildlife and the neighbors.

Moving out the US and leaving the expensive perks we've all come so accustumed to is not for everyone.  Panama is not for everyone which is good because we'd be over run with Americans if it was.  But for those of us that are willing to give up a few things to experience a world so different from the one we lived it, there are perks.  We are just beginning to discover those perks like the park we went to yesterday.  The scenery here, the people, the food, the beaches, the mountains and the culture all  make this an adventure of a lifetime.  Whether we live in Panama for a few years or the rest of our lives it will always be a part of us.
at September 18, 2011