Last week we asked Alexandra from our lawyers office how she learned to speak English. She explained that she studied English for two years in college and did three hours each night of Rosetta Stone as suggested by her professor.  She said she really hated doing that much homework but since she really wanted to learn to speak English she was willing to work on it that hard.  Clyde and I realized at that moment that learning Spanish was going to take lots of time, effort and years to master.
Yesterday was day one in Spanish Panama, the school we choose to teach us to speak Spanish.  Being able to talk to the locals would make our life in Panama so much easier.  But as we have discovered so far living here, nothing comes easy in Panama so why did we think this would be any different? 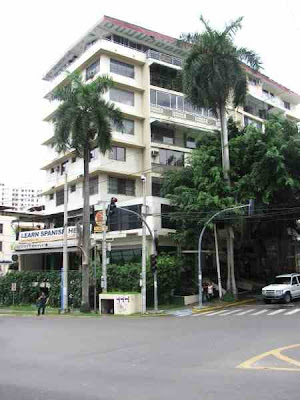 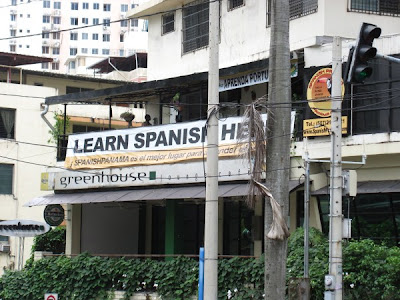 We left the house yesterday morning at 7am and didn't have to be to the school until 8:30. It's about a 45 minute drive from our house in Capira to Panama City where the school is located.  We had taken several trial runs to that area to make sure that we knew how to get there.  All was fine until we hit traffic in the city which made us a few minutes late for our first day of class.  Just as we were walking into the school Clyde's phone rang and it was of course the school looking for us.  The first person that we met was Maria our "professora" who shook our hands and guided us into the classroom. We introduced ourselves to our only other classmate Kaitlyn, a young lady from the US.  Maria immediately began speaking in Spanish and writing on the board. We were suddenly, and abruptly immersed in spanish lessons.

As many of you know, Clyde and I have been working on learning Spanish with Rosetta Stone.  It has been over a year of Rosetta stone and we feel like we have a pretty good start on our education of learning Spanish.  The Rosetta Stone concept is that instead of teaching you the grammer rules, they feel that you just need to get "used to" using the right form of verbs instead of learning the rules of conjugation.  Fast forward to our new Spanish Lessons where they where trying to teach us rules of conjugation.  Hell, in our fifties, we almost forgot what "conjugation" means!!

During our breaks we chatted in the social area with Kaitlyn a sweet young girl that moved to Panama years ago with her family.  Having lived in France and the US she aleady speaks French and seems to be a little more advanced than us in her Spanish.  The three of us felt comfortable in class together and have no problem asking questions or admitting that the professora has lost us.


Today we went to class with an open mind and were greeted by Suzanne our professora for today.  The school seems to like to have different instructors each day and we're not sure why.  After the first half of the class Suzanne seemed to be packing up her stuff as if class was over.  In walks another woman and Suzanne explains that she is leaving and Isis will be taking over the next two hours.  Isis seems to be lost, does not know what to teach us so just starts talking to us in Spanish and flipping pages in the book. She spent the first hour trying to figure out what to do with us and didn't seem to understand what we were asking us in English.

Isis then attempted to teach us the uses of the verbs Ser and Estar.  The conjugation of these two verbs is irregular and difficult to understand.   She didn't  seem to know enough English to explain it to us and it only got worse when we asked questions.  At one point she was almost yelling at me telling me that I needed to memorize how these verbs were used.  I kept loudly telling her that this was only day two of learning Spanish for us.  Of course we didn't understand something so difficult yet.  It only got worse as the three of us continued to get more confused and frustrated. When we'd ask her what a word was in Spanish she'd hand us the Spanish/English dictionary and tell us to look it up.  I began to get mouthy and asked then what do we need you for if we have to teach ourselves?  We paid $1200 for one month of classes and this is how we get treated?  Due to her lack of English she didn't get that we were all upset nor did my sarcastic remarks bother her.  It seems that when a Panamanian doesn't understand our English they don't admit it, they just nod their head as if they understand.  She apparently gave up on Ser and Estar at one point and went onto something else which confused us even more.  She didn't understand why the three of us were not following her.  Finally Clyde lost it and yelled out "we don't speak Spanish and have no idea what you're doing."   He didn't realize that she had gone on to another subject all together without really telling us!   Then he got up and walked out of the class and I followed practically in tears.

Clyde stomped into the managers office and said (OK, he shouted) "there are three of us in that classroom and we all agree that we do not want that woman teaching us anymore."   Carmen the manager of the school had been listening in on our class and knew that Isis was unable to get her point across to us.  She apologized profusely and assured us that we would not have Isis as an instructor anymore.  In fact she guaranteed us that we would have no more than 2 different instructors for the duration of our classes.  Kaitlyn walked in and put her two cents in also. Carmen also told us that we would not be charged for this class and would be given an additional class in it's place.

Clyde and I chatted with Kaitlyn outside about the ordeal before saying adios to her and heading out to find some lunch.  We stopped at a nice cafe called "Churreria Manola," that specialized in churros.  After sharing a meal of chicken parmesian with pantacones (plantain chips) we splurged on a manzano churro (apple filled long, thin pastry).

Before leaving the city yesterday we found a hotel and booked three nights so that we could stay in Panama City during the week for classes.  With our pensionado discount being 50% off hotel rooms during the week the room cost only $32.00 a night.  The hotel is just a few blocks from the Spanish school so we can leave the car in a guarded parking lot and walk to school.  In order to make it to class today we left the house at 6:30 and barely made it here on time.  We checked into our hotel for a relaxing afternoon.  After a few hours of homework and trying to grasp the concept of the verbs Ser and Estar we had dinner out and a refreshing swim in the hotel's roof top pool with a little Ron Abuelo on the side (Clyde had a little bit more than a little). On the way home we stopped to pickup a few notebooks and a new Spanish/English dictionary with bigger print.  Clyde was the first to notice that I had picked out a Spanish......French dictionary instead! 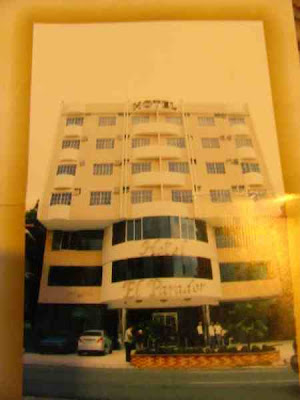 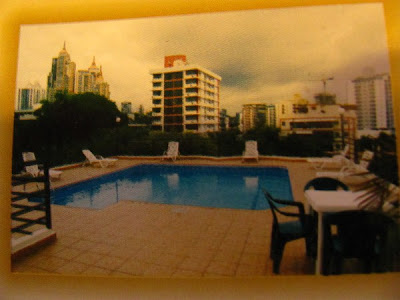 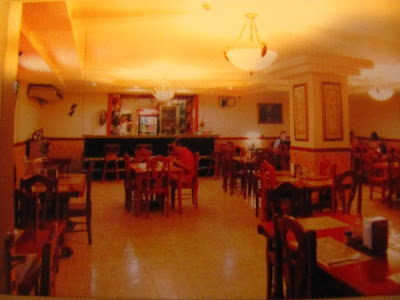 Let me repeat myself, we paid $32 a day for a hotel with a free breakfast and a rooftop pool!  I do have to admit the room itself was plain and not huge by American standards, but for  $32  night, it was a fantastic deal!
Tomorrow will be a new day!  At least we don't have to drive in from Capira and fight traffic to make it to school on time.  All we have to do is enjoy the free breakfast in the hotel and walk a few blocks to school.  As we open our minds and mouths to learn new things in the hope that someday we will sound more like the locals and less like silly gringos attempting to speak their language.
Posted by Clyde and Terry Coles at 7:48 PM