Yesterday we splurged and bought a small tv to hold us over until our stuff comes in sometime next month.  We had been watching tv via the internet but every few minutes it would freeze and we'd never see an entire show from beginning to end.  It's funny to think that a 19 inch tv is tiny by today's standards of the wall sized, mega tv's with surrond sound, 3D and whatever new thing is out these days. I'm not the techie person of the house, that would be Clyde.

We got the tv home and Clyde quickly went to work setting it up. First we had to create a tv stand to put it on.  He looked around the empty living room to find two long boxes that are storing the split unit air conditioners that are still waiting for the installer to come install.  He stacked them both up and proudly put the tv on top along with the cable box.  Then he moved a settee (padded bench seat that is part of our new dinette set, it has 4 chairs and this thing) just a few feet from the tv for us "old" folks that don't see too well.  On one side is a lawn chair to be used as an end table of course and in the middle a plastic step stool to be used as a foot rest. 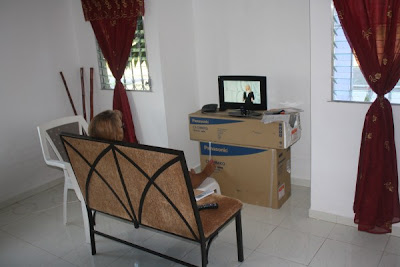 ﻿
Clyde got it all hooked up and figured out how to use the cable box and remotes. Then he gave me detailed instructions.  He held up the remote so I could see it and said "see where it says guide, that's how you find the guide, then you can scroll up and down to find what you want to watch."  Anything beyond that is just too much technical stuff for my blonde brain.

He begins to search channels to see what's included in the cable package we purchased for almost half of what we were paying in the states.  There are lots of channels and the listings are in both Spanish and English.  We found International House Hunters our old favorite and it was in English, with Spanish subtitles.  I sat down to watch and soon realized that I enjoyed reading the Spanish subtitles more than watching the show. So now every time I watch tv I will be getting a Spanish lesson at the same time. Later on that afternoon I found The Dr. Oz Show in the guide listing and decided to watch.  But there was a problem since Dr. Oz who I'd watched many times via DVR in the US was now speaking Spanish but there were NO English subtitles.

Betsy our tri-lingual Panamanian friend mentioned to us one day that she uses SAP on her tv so that she can watch tv in English.  We couldn't figure out how that worked so I asked Clyde to email her for directions.  A while later she emailed back with the how to's for SAP. There's an adjustment that allows us to select "English if available," so that the show will be broadcast in English whenever possible.  As we get more comfortable with Spanish as a second language it'll be nice to have the option to watch Spanish shows but it's also nice to have access to old comforts from the US like Dr. Oz and International House Hunters.  Although we didn't move here to watch tv!

All of the commercials are in Spanish and many have notations along the bottom in which countries they are valid.  For example some were valid in Argentina, others in Columbia or Venezuela.  And we even have a Mall Channel. Good thing it's in Spanish otherwise I might be shopping from home since I have lots of free time these days.

The installers are supposed to come look at the air conditioner that needs to be installed today.  We're not sure if they'll do it today or have to come back at another time with supplies.  Poor Clyde will have to tear down his cardboard creation of an entertainment center and re-construct it again using empty boxes.
at September 22, 2011