Yesterday we set out with map in hand to look for beaches.  This should be easy since Panama is located between two major bodies of water.....the Pacific Ocean and the Carribbean Sea and it's only about an hour drive from one to the other.  Since we first needed to pickup a few towels we drove to Coronado and stopped at the El Rey Supermarket.  Since we were already there we thought we'd checkout Coronado Beach.   Many of the locals here told us that Coronado Beach is private and one can only get in IF they're staying at at a hotel there or have property inside the community.

We drove to the guard gate and the man came out and starting talking in Spanish rather quickly.  We knew he was asking us some question so when the man stopped talking Clyde quickly said "si" and the man waved us through the gate.  Apparently since we're gringos he thought we owned property in the community and let us in.  I was impressed!

Down the road I drove expecting it to open up to  gorgeous, white sandy beaches surronded by high rise condos.  I expected tons of hard bodies laying on the beach soaking up the sun with surfers catching a wave in the distance.  Because this was the Coronado Beach that I'd read about and seen pictures that looked this way.  This is where all the rich ex-pats go to retire and to live in the lap on luxury on Panama's most wonderful beach. 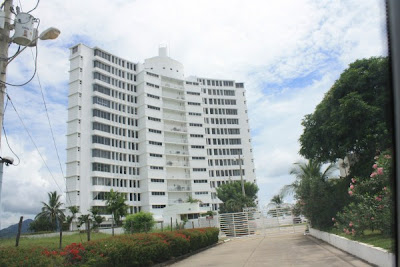 ﻿
Instead we encountered potholes in the road big enough to drop a tire into.  And they were constant, every where never getting any better. The road was horribly rough and rugged yet we were driving by million dollar estates that appeared to be on the waterfront.  We were amazed and wondered why would someone want to live here?  The houses were beautiful and expensive and there must be high home owners association fees in order to live in this ritzy community. 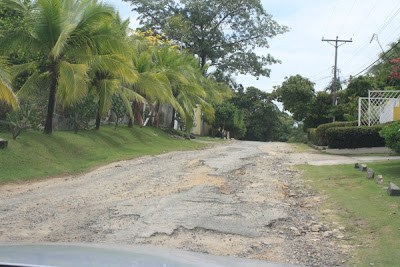 We followed to see where people were going and found parking and a path about the size of an alley way leading to the beach.  The path was sandwiched inbetween houses almost like it was an after thought.  "Oh yeah, let's keep a path open for those poor folks that don't own property here." So we followed the other poor folks down to the beach. 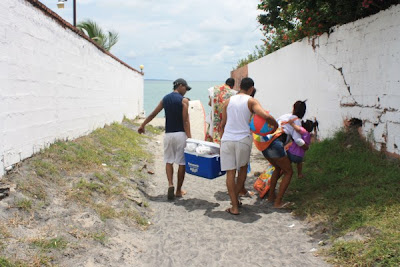 Once on the beach we found black sand with sparkly, white silica crystals in it along with some lighter colored sand.  Immediately I headed toward the water.  First I had to walk over small rocks but once I was immersed the bottom was smooth and the water was warm and wonderful.  The waves were light to moderate but we did see some surfers off to our left side where the waves were bigger.  In the distance were highrise condos and many more miles of beach.  In front of us were single family homes. and hotels and condos all with beach access. There were people on the beach but it certainly was not crowded.  But the day was cloudy and this is the rainy season here so perhaps that's why the beach was not packed with hoards of bikini clad bodies baking in the sun. 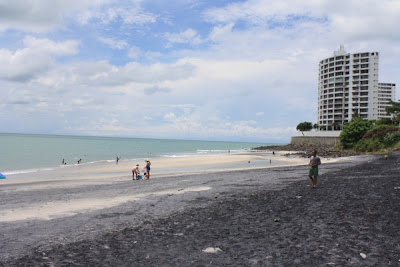 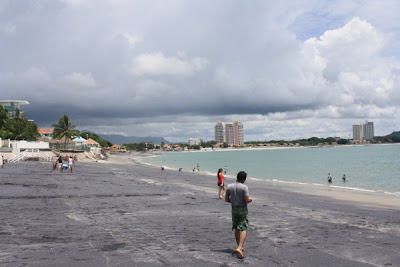 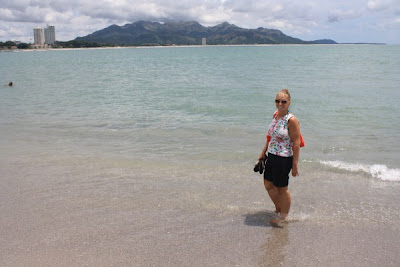 ﻿
On the way home we went down a few more roads looking for other beaches.  We found one that appeared almost like a little fishing village.  There were tiny fishing shacks along the beach that looked worse to me than some port-o-potties I've seen.  And there were dark skinned families that had set up camps, barbeques and hammocks everywhere.  They looked like they were planning to stay for a while. 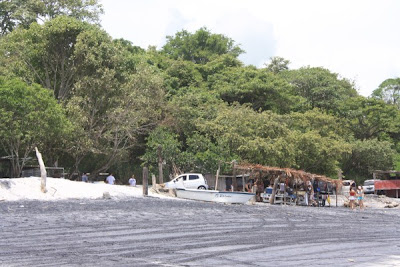 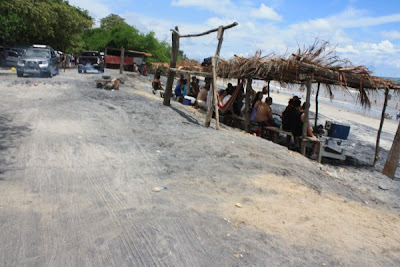 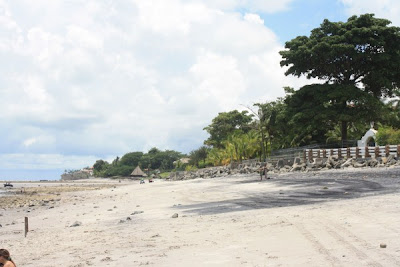 The sand here was also black sand but there was trash along the beach and it just felt dirty and unsafe to me and I wanted to get out of there.  As we backed the car out of the tiny parking lot I noticed a good looking young man who was parked next to us.  He was driving a new looking Audi, so perhaps my first impression of these people as being lower class Panamanians was wrong?  Perhaps just hard working people trying to relax after a long week of work at the beach. 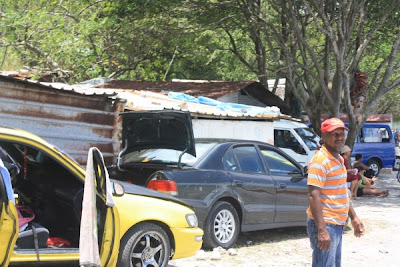 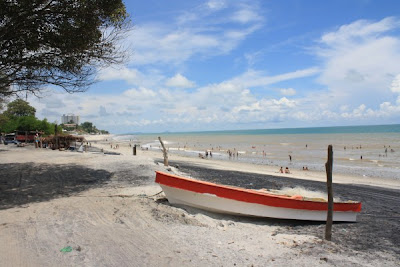 It was getting late and my stomach was yelling loudly that it needed food immediately. We found a nearby restaurant on the highway for lunch.  It was a barbeque place with both indoor and outdoor seating. We sat outside since we were covered with sand from the beaches.  After looking at the menu we ordered half a chicken with baked potato and cole slaw to share.  First they served us with chips and salsa. This was a nice surprise but the quantity of chips was sparse and not at all similar to the pound of chips Tex-Mex restaurants in Texas serve up.  But it was just enough to nibble on while waiting for the food.  When the food came there was lots of tasty chicken, the potato and even the cole slaw was good.  I'm a bit of a cole slaw snob and always said that no one in Texas makes good cole slaw.  We make it at home lots and our recipe is similar to the way my grandma in New Jersey used to make it when I was growing up.

Back at the casa we scrubbed off the black sand from our feet and bodies and relaxed for the night in our hammocks.  An ice cream man came by on foot ringing a little bell and Clyde ran inside to get a buck for two ice pops.  They were coconut and sort of like a fruit smoothie with all fruit.


Last week we did find a tiny beach not far from our house. We'll have to venture out to that one again and this time get out of the car and look around.  But right now I think I'd better get Clyde's butt out of bed already and then we'll see what adventures today might bring.
at September 19, 2011