Going to the pharmacy in Panama is almost like going to see a doctor.  Clyde and I are still getting over this cold, sinus thing and he's had a horrible cough that's kept him up at night.  So today our way to Spanish school yesterday I suggested he stop at a farmacia and get something for the cough. We went into Farmacia Arrocha and asked the girl at the counter for something to suppress a cold.  She then gets the pharmacist involved who asked "mucosa too?"  Clyde said "yes" and she gave him a box of something.  As soon as we got to school he popped a few pills and it did seem to help a bit.

Panama City is in the process of putting in a subway system to assist with public transportation and the horribly heavy traffic.  In the meantime they have had to re-route traffic on many streets causing traffic jams everywhere.  For the past few days Clyde and I have enjoyed walking around the city and eating out at open air, steet side cafe's and restaurants.  We have experimented with a variety of new foods since everything imaginable is available in the city. 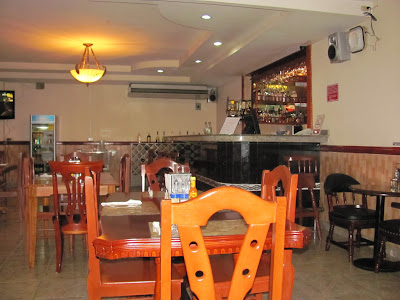 Two Views of the restaurant at Hotel Parador 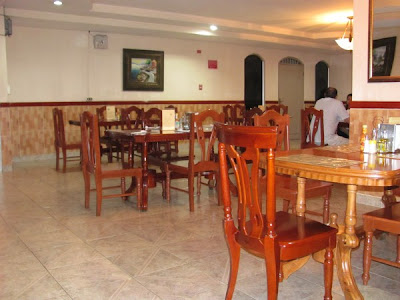 Languistino
(Large Shrimp)
This is two of the four 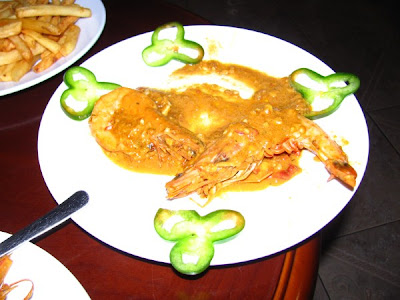 ﻿
Last night we had dinner in the hotel's restaurant since it was raining outside and we didn't want to walk in it.  We ordered the most expensive thing on the menu.....langastinos (big shrimp) in garlic sauce for $12.50.  It was very good and came with a large garden salad and we had the fries.  By the way salad dressing here in Panama is simply oil and vinegar and I've really come to enjoy it.  Some restaurants have balsamic vinegar too.

After school on Thursday we met up with our friend Betsy for lunch at an Italian restaurant near our hotel and school.  The front room of the restaurant was small so we headed out the back door where we noticed more tables.  The back yard opened up to a quaint area of tables interspersed with tall trees, rocks and fountains to simulate the countryside of Italy.  On one side overlooking the tables were balconies of an old hotel next door. Still a working hotel one can only imagine that the guests mouths must water and their stomachs must growl with the fantastic smells of Italian food rising up to their rooms. It was a delightful dining experience!


Going to school in Panama City is like going to work again.  We have to get up early and get there on time and even have homework to do.  Once we get done with school I'm sure things will settle down, our stuff will eventually arrive from the US and we'll have time to relax and realize what retirement is really all about.  Oh hell, who am I kidding. We're not the type of people to relax.  Once we're done with school I'll get back on a regular schedule of working out and then we've got mucho mas exploring to do in this beautiful new country that we live. Lots to see and do and lots of new friends to make.

Yesterday was a major Jewish holiday here, so they tell us and many of the stores were closed.  Apparently it was the Jewish new year and we were told by someone at school that there is a huge Jewish population in Panama City.  But then there is a huge population of everyone in the city.  Since Panama is "where the world meets" it's a melting pot of nationalities, ethnicities and such.  Panama City has it's own China town and our little town of Capira has a large Chino population too.  In fact most of the tiny stores in the local mercado are owned by Chinese here in Capira.

We're back home in Capira for the weekend so I spent the day working on Spanish homework and trying to get a head start on next weeks lessons. Spanish is starting to get a bit easier everyday and we have to force ourselves to use it with each other.  Today Clyde took a siesta (from being retired I guess) in the hammock.  But he did cook some spicy corvina (fish) for dinner tonight topped with pico de gallo (diced tomatoes, onions and hot peppers) along with some cut up fresh papaya and rice.

We sat around all day waiting for the air conditioner installers to come by the house. They said they'd be here around 1pm, let's hope that's not one in the morning.  Today they were supposed to look at the project that had to be done.  Then they would have to come back at another time to actually do the work.  The a/c is what's called a split unit and involves cutting a hole in the wall and the wall is cement.  Half of the unit goes outside and the other half inside and runs off a remote control in the room.  This is Panama and this is how things work here.  Good thing we're not in a hurry to have it installed. Actually we're doing just fine living without a/c since the weather here is just perfect.  It cools down to about 23 degrees at night (no silly that's celcius, lower 70's) and warms up to 30 to 32 celcius during the day (85-89 farenheit).  The breezes are usually light and since this is the start of the rainy season it's partly sunny with some showers these days.  But the rain seems to bother no one in Panama.  Road crews of men keep working even those up on poles.....construction goes on.....people can be seen walking everywhere.......they wear alot of rubber shoes here and now we know why.  Crocs (the shoes) are common here and they even sell knock offs for a few bucks.
at September 30, 2011