Valentine's Day in the U.S. according to me, is a holiday invented by the Hallmark Company to sell over-priced cards.  And then the retailers jumped on the band wagon and pushed chocolates, flowers, stuffed animals and other gifty items in our faces.  Fast forward through the years and we retire to Panamá, a simple country that can't afford the frivolous, American luxuries.....or can they? We spent the morning in Panamá City taking care of some business with our lawyer, a young, classy, educated, engaged Panamanian woman.  As soon as we entered her office she greeted me with a hug and said "Happy Valentine's Day." So I just had to inquire whether or not she as a Panamanian celebrated Valentine's Day, to which she said "yes" and went on to say that she and her fiance would be going out for a nice dinner tonight.

Since we arrived in the city around noon, and didn't have to meet with Alexandra, our lawyer until 1pm, we stopped for lunch at a Mexican Restaurant smack, dab in the middle of the financial district.  The restaurant quickly filled with well dressed business people, all Panamanian.  The men in nicely pressed trousers, dress shirts and ties while the women wore business suits with heels and well adorned with jewelry.  Obviously, this crowd was making more than the typical $1.50 to $1.75 an hour that many Panamanians earn here since they could afford to eat lunch out.  The meals at this restaurant averaged between $5.00 and $10.00 which are a bit high for the locals. 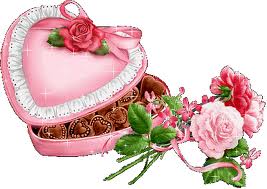 At a nearby table I spotted a well dressed couple with a brightly colored gift bag, covered in red and pink hearts which screamed out Valentine's Day present.  Next to the restaurant stood a Hallmark store, and the window was decorated with an array of huge, mylar balloons shaped as hearts and cupids to celebrate the day also.  And last week while shopping in Super Xtra, the cheapest, most typical Panamanian grocery store in La Chorrera we spotted it there too.  In the middle of the main aisle there was a table that proudly displayed a few heart shaped boxes of chocolate, some artificial roses, mugs filled with stuffed animals, candles and other gifty items and a red sign that read "Dia de San Valentin."

And since my dear, sweet, husband is such a romantic, we actually got married on Valentine's Day eight years ago today.  I had absolutely no idea back then how my life would evolve, in eight short years.  What a whirlwind it has been!  Clyde fell in love with a fat, self conscious, lonely women who didn't like herself and certainly couldn't understand how someone could love her.  It was because of this new relationship that I underwent gastric bypass surgery soon after we married, then several plastic surgeries to nip and tuck everything. He helped me to become the confident, outgoing women that I am today.  A women that was courageous enough to move out of the U.S. and start life all over again in Panamá.

Then one day Clyde read something I'd written and spotted a talent for writing, something I had not done in many years.  As we prepared to move to Panamá he encouraged me to write about our adventures, which is how this blog began.  There are now hundreds of people following this blog on a regular basis, some have become new friends.  Once I reunited with my love of writing, I kept going which led to me being published in International Living Magazine and I know there's a book in my future.

So perhaps Valentine's Day is not just a silly, Hallmark holiday but one that has a special meaning to us.  Because it does signify the coming together of two lost, lonely souls, who's lives became one on Valentine's Day in 2004.  Marrying Clyde has made me who I am today and I hope that we can continue to love each other, grow together, laugh together, and explore a lifetime of new adventures.....along the gringo trail.
at February 14, 2012