Fat Tuesday is the last hurrah before the long fast for lent, and is celebrated big on the last day of Carnival here in Panamá. On day one we soon realized that being packed like sardines among wet, drunken, dancing strangers was more enjoyable after a few alcoholic beverages.  So we sipped on some seco and cranberry juice, and danced the afternoon away under the hot sun making new friends. 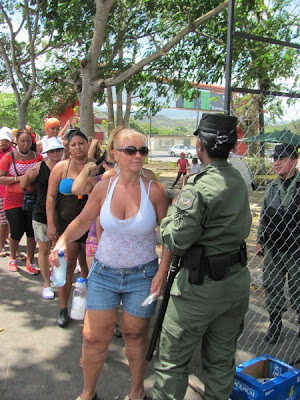 Terry anticipating her "pat down" 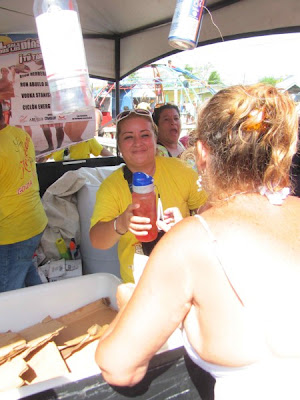 One Seco and Cranberry para va (to go),
see the big bottle 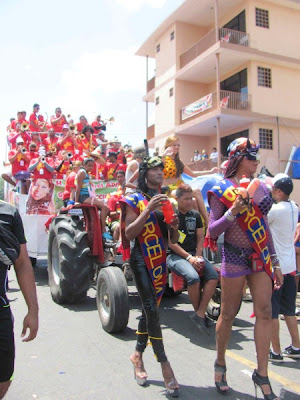 The gays went all out on this final Carnival Day 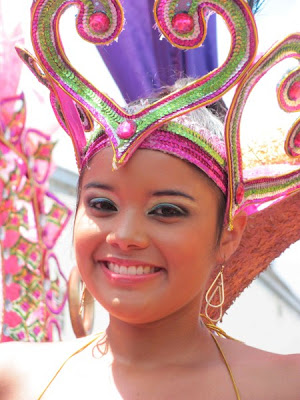 Princess of the Float 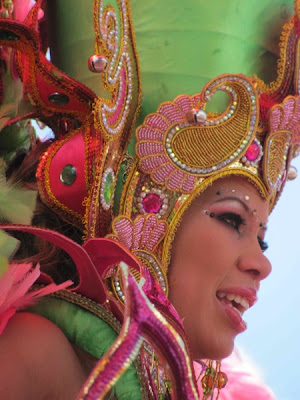 Close up of one of the queens

Here, the queen is waving directly at Clyde, so he thinks 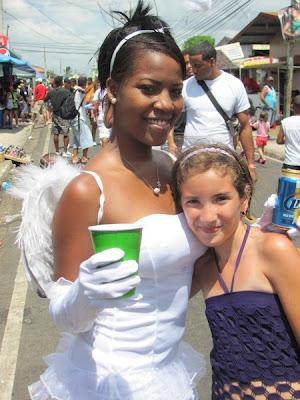 An Angel posing with Angie's daughter 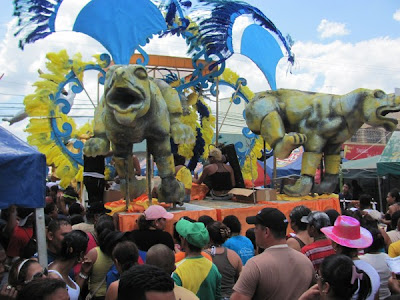 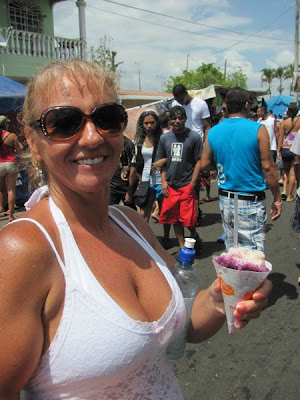 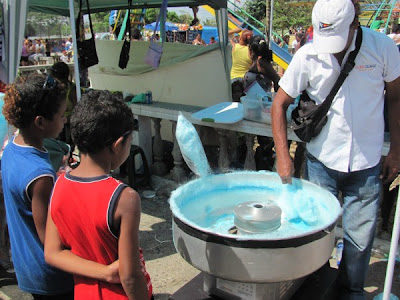 Yes, they do have blue cotton candy

Seco Herrerano, is the national alcoholic drink of Panamá and sold at 70 proof.  Locally produced since 1908, this popular brand of seco is shipped to more than 65 countries throughout the world.  Traditionally it's taken straight, but can also be mixed with fruit juices or milk.  Unlike some other adult beverages, seco seems to come on strong and the effects last long after the bottle is gone.

At one point during the day, a float was going down the street and was too wide to pass by an old sign post sticking out.  This stopped the procession, they tried to back up the float, tried to remove the sign post and basically were stumped.  Finally they moved the float over toward the other side of the street, barely inching by. We stood underneath hoping something didn't get knocked down on our heads.  All the while the people on the float kept dancing, waving and throwing kisses to the crowds, and Clyde of course, as if nothing was wrong. 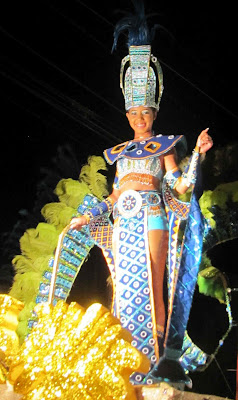 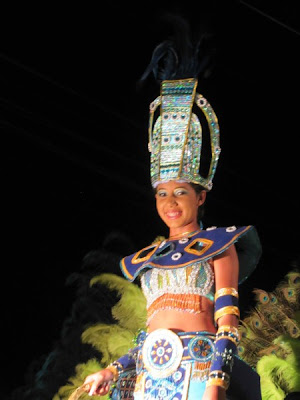 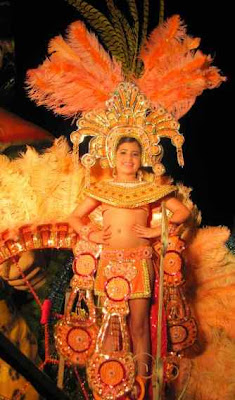 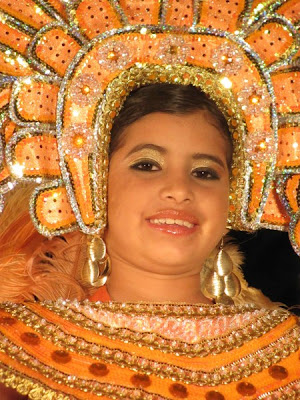 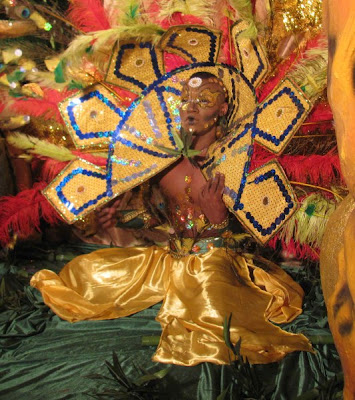 This guy is REAL....and they didn't move at all, just amazing! 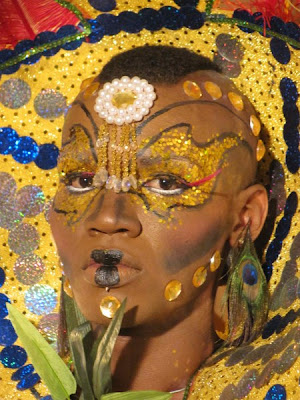 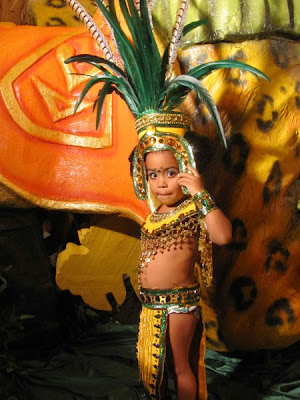 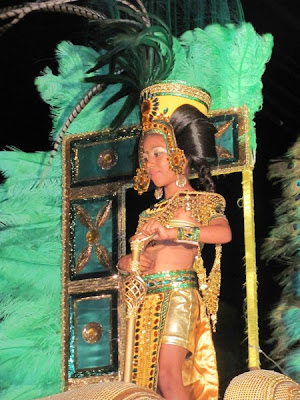 One of the queens attendents 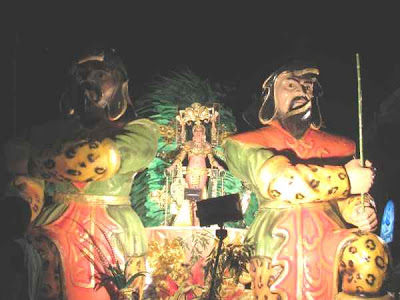 Gives you an idea of how big this float is,
see the queen in the middle 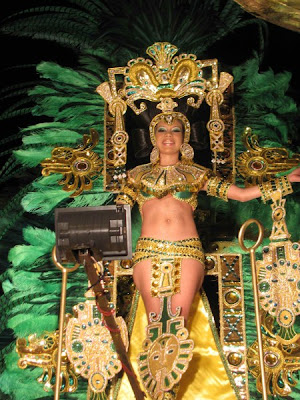 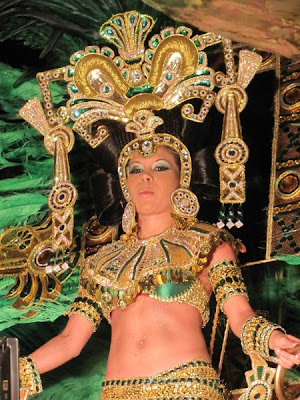 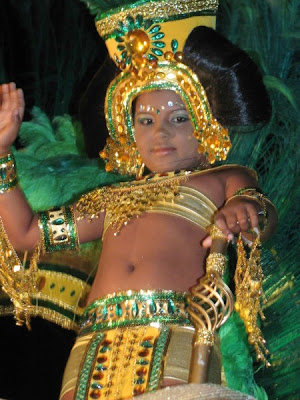 The loud music and merriment was occasionally interrupted by the procession of elaborately decorated floats, carrying the Carnival queens.  We made our way back home in time for dinner and to peel off our clothes and shower.  A while later some friends called to say they were headed over this way, so we asked them to pick us up and we headed back over to see what night time at Carnival was like.  With less people than during the day, it was much easier to see the floats up close for pictures. It was midnight when we arrived home after an exhausting day of fun in the sun.  And so another first in Panamá comes to an end, as we survived Carnival.  We made new friends and showed the locals a different side of Americanos.  Two crazy gringos that enjoy life, and love to have fun in retirement......along the gringo trail.
at February 22, 2012