The Pan American Highway goes from Alaska to the tip of South America, where it breaks between Columbia and Panama in the dense, Darian jungle.  Since this is basically the only road through Panamá, it's a vital lifeline transporting food, medication, money, gas and everything else from one end of the country to the other.

Today marks the beginning of the sixth day that the Ngobe Bugle Indians have set up a road block closing off the Pan American Highway. They set up roadblocks at the San Felix intersection where the road crosses their comarca.  A comarca is traditional land within Panamá on which the Indians have been granted land rights and self govern themselves.  Unlike U.S. Indians the indigenous people of Panamá have not been put onto these lands, but instead it's their traditional homelands. 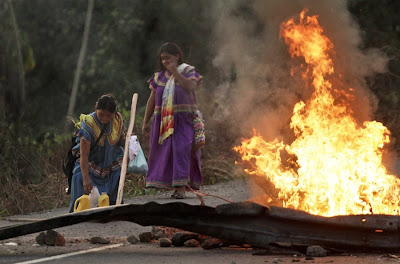 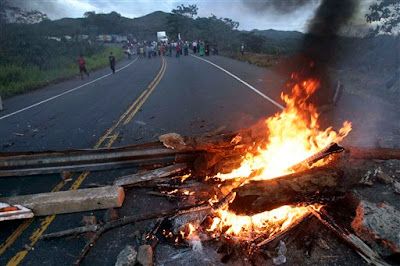 Associated Press
Ngobe Bugle Road Blockage
﻿
Roadblocks were setup by the Indians in protest of the govenment granting private companies rights to develop hydro-electric projects on their land.  And also granting mining companies the rights to explore and dig on their land.  As a result trucks bringing fresh produce, meat, and milk from the Boquete and David areas are unable to get to Panama City.  And trucks supplying gasoline, diesel and world supplies coming off boats in Panama City are unable to make it to the other side of the country.  Each side of the country is suffering and everyone is hoping that the President steps in to resolve the issues soon.  The roadblock area is about a four hour drive from where we live and we haven't noticed any lack of food in the grocery stores just yet.

The following is how Wikipedia explains the Ngabe-Bugle Indians and the problems they're having.  There are six indegenous Indian tribes in Panamá but the Ngabe-Bugle are some of the poorest.

The Ngobe-Buglé experience much adversity as a result of contemporary conditions. As localized problems of land and crop shortage grow into a more generalized issue, and it becomes more difficult to generate capital in a shrinking labor market, malnutrition is prevalent, especially in children and expecting mothers. Attempts to generate capital by becoming a migrant worker also have negative social effects including added strains on family structure and increased pressure on women to provide for their children alone.

The dispersed nature of the population also makes existing medical care hard to access, and a general lack of potable water and sanitation services cause a myriad of health problems. Lack of sufficient infrastructure and under provision of social services by the government is often the root of many problems that plague the most rural areas. Prevalence of poor Spanish skills is also an issue as Guyamí people are often unaware of legal rights and hence either fail to communicate complaints or to use the paths of legal recourse available to them when it would be beneficial to do so. This condition especially affects women because far fewer of them speak Spanish than men. Levels of secondary education are also low in the comarca Ngäbe-Buglé as children are financially limited and transportation to secondary schooling presents a great challenge for many families. As a result, only ~18% of kids ages 15–19 in the comarca Ngöbe-Buglé have schooling beyond the sixth grade.

Finally, many Guyamí communities are threatened by environmental degradation caused by both farming and government or corporate exploitation of their land. The Cerro Colorado copper deposit, one of the world’s largest deposits of copper ore is located in the comarca Ngäbe-Buglé. Mining in the area, although it is legal because the property rights of subsurface resources belong to the state, poses a great environmental threat as waste materials from extraction and processing pollute local watersheds. Although they may provide temporary income, mining endeavors also have many adverse social and cultural effects in the comarca and most natives are opposed to mineral exploitation on their lands.

As U.S. expats granted permission to live in Panamá there's nothing we can do but watch and wait. We can only hope that President Martinelli resolves the issues soon, so life in Panamá will continue to roll along the Pan American Highway here along the gringo trail.

NOTE:  We just received word that the government of Panama has taken action and opened up the roads for travel.
at February 05, 2012