American expats crashed the Canadian Thanksgiving Bash today, at La Joya de Chicá Mountain Lodge.  Owner Phil offered his place for the shindig, that included guests from Panama City all the way to the beach community of Coronado and beyond.  We really didn't crash the party but received an invite along with other members of the La Chorrera social group, and with members of CASA (Coronado Area Social Association).  Since our Canadian friends enjoyed our American Fourth of July celebration a few months back, we helped them celebrate their Thanksgiving.

With the maple leaf being the symbol of Canada I wanted to bake cookies with this theme.  But surely I'd never find a maple leaf cookie cutter in Panamá, so I'd have to improvise.  I found a picture online and drew it and cut it out creating a template.  Then I traced the design on to each cookie using a knife to poke holes.  Finally I made red frosting and painted on each leaf design, carefully filling in each leaf outline.  Although this sounded like a good idea in my head, the whole process took over five hours. 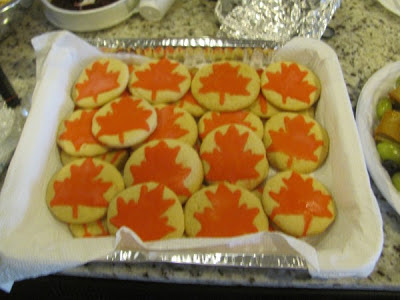 The massive downpour of rain didn't keep people from climbing up the hill to the picturesque, mountain getaway.  The temperature was a warm 89F/32c here at sea level, but cooled off to a brisk 71F/22c at the top.  The potluck style luncheon featured a variety of food and desserts to fill every one's belly.  With a crowd of 30 or more, there was plenty of good conversation to go around.  And whenever two countries collide, there's bound to be some friendly banter comparing the good and evil of both nations. Unlike our American friends who moved here for many different reasons, the Canadians moved here mostly to escape the long, arctic winters.  But citizens from both countries will agree that the cost of living had become so out of hand in their homelands, retiring to Panamá provided a good option. 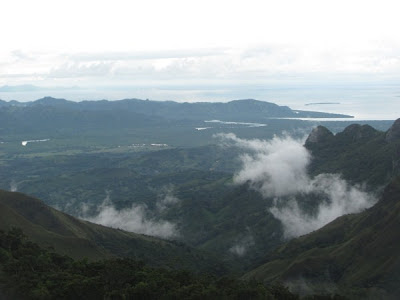 stopped on the way down
the mountain to take this picture


So today we've come together to give thanks for all of the new friends we've come to love and respect.  Those friends we never would have made had we not been crazy enough to move our lives to Panamá.  Now we celebrate our American holidays, along with Canadian and Panamanian holidays....along the gringo trail.
at October 14, 2012