And the saga continues about a poor, hungry doberman always looking for something to eat.  She roams freely through her acre of land chasing lizards and some laying chickens that her owner is raising, to cut down on the cost of buying eggs.  Yesterday morning when farmer Clyde went out to feed and water the chickens he noticed that one had flew the coop, shall we say.  And since chickens are followers, one of her sisters tried to follow along but became tangled in the mesh walls of the coop.  The one that escapes first is sort of handicapped, with feet that point in different directions, but she still seems to get around. 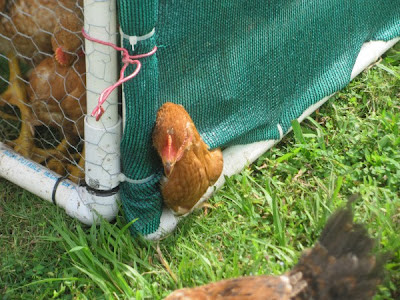 Heh Sis, wait for me! 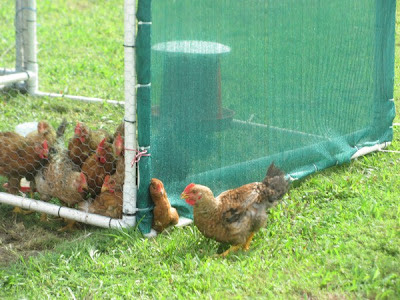 Now, if I can only squeeze through here!


Later in the day I saw that Clyde had plunked down on his butt in the grass, with his cackle of chicks all around him in front of the coop.  Nosing around was his other faithful female companion Venus, his feisty doberwoman. Until now Venus had expressed an interest in dining on the delectable darlings, or so we thought.  But instead it seems as though the ditsy dobie likes the taste of chicken droppings.  A nicer way to say it would be that our dobie is recycling chicken protein back into the soil. 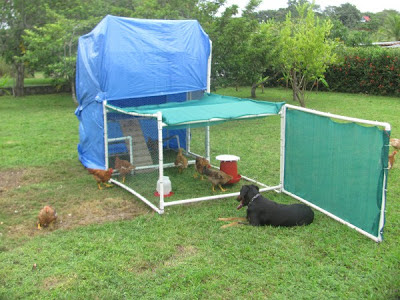 OMG!  I can't believe he let me this close! 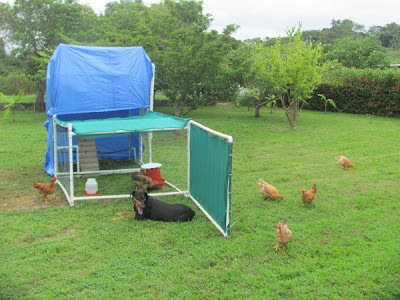 Wait a minute, where did they all go?

Under Clyde's watchful eye, Venus was all too happy to give up her freedom and join the chickens inside their coop.  Perhaps we've been going about this all wrong?  When all else fails perhaps we should let the chickens roam free and put the dog in the coop?  She'd probably be happy until she ran out of chicken protein to recycle, while she's anxiously awaiting mango season to come around again. 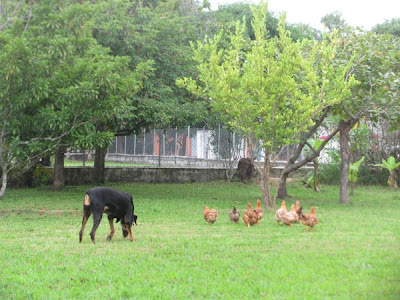 Just me and the girls 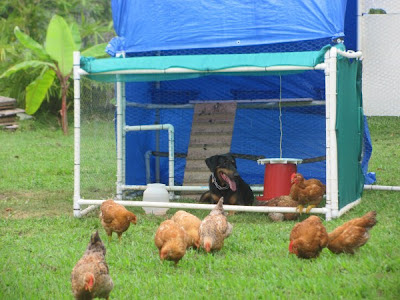 This is alright!  Shade and all the
"chicken protein by products" that I can handle!
﻿

After many attempts to introduce our canine to the chicks we picked up a soft, cloth muzzle for her.  This way she could roam with and smell the chickens but we didn't have to worry about her eating one while we weren't looking.  So she either finally got the idea that the chickens are not for lunch, or she disliked the muzzle so much that she gave up the fight.  Whatever the case, there seems to be harmony free ranging at our casa these days.  And as for the price of that first dozen eggs whenever it comes, let's just hope those suckers are made of gold.  Gold eggs may pay for all the days of grief, feed, hay, and other supplies to make the chicks happy....along the gringo trail.