If one door closes, then build yourself a new one.  As you may remember when we bought this house it came with steel security doors and screens, but no solid doors that close.  Since we've been living in a fish bowl our neighbors have probably seen some things they shouldn't have seen.  Clyde actually considered hiring someone to make the doors, but the prices sounded too high so he decided to make his own.

While waiting for the teak wood to be delivered from across the country, he found some rough wood at a nearby hardware store.  A new to us type of wood called "espave" is apparently wood from the wild cashew tree also known as "marañon."  We actually think the other inside doors in the house are constructed out of this type of wood now that we found it.  Since the wood is rough and thick it will give us that rustic sort of look that matches the rest of the house.  And for less than $150.00 a door, it's inexpensive enough to keep satisfy my dear hubby.  With a need for four wide doors the handy man will be busy for a while.  Two of the doors are four feet wide and the other two are a bit smaller. 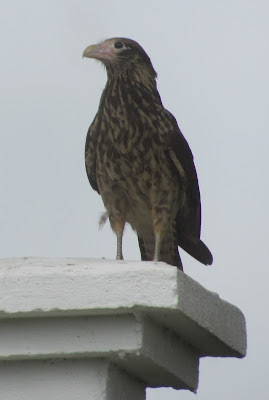 Found this pretty boy on the way to the store
﻿

Speaking of doors, our adolescent age chickens sprung the coop yesterday by making themselves a new door.  From our bedroom window I noticed one had escaped and watched as others followed through the tiny hole in the bottom of the fence. By the time Clyde went out to round them up, four chickens were running around our yard with farmer Clyde chasing them.  We bought a simple cloth muzzle for Venus and are introducing her to the chickens this way.  She seems more interested in poking them with her snout, sort of like she's taunting them instead of trying to eat them.  But just in case she's looking for a snack until we're more comfortable she can meet them wearing a muzzle.

Clyde reached down underneath the entryway bench to throw some shoes on this morning. He had just worn them last week.   Luckily he was paying attention!  There seemed to be just a little bit of mold on them.  hmmmm.... This is Panama!  A little swipe with some bleach water and they were good to go.  But, as you see in the picture, GROSS! 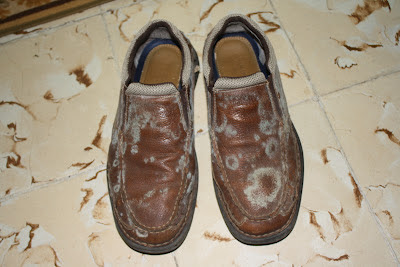 YEP!  This is Panama!
Also, the reason I have a "dry room" for Terry's clothes
﻿
Yesterday I spray painted our outdoor furniture to freshen it up and watched as our ditsy doberman tried to climb the mango tree.  She sits under it anxiously waiting, looking up at the birds wondering why no more mangoes are dropping down for her to eat.  Then on her hind legs she jumps, attempting to climb up the tree, scratching her paws on it while barking.  But one might say that she's barking up the wrong tree since there's no mangoes going to fall from it anytime soon.  I just hope that the banana trees don't produce fruit until their much taller otherwise we may never get any.  Instead we may just find a 200 pound dog passed out from an overdose of bananas. 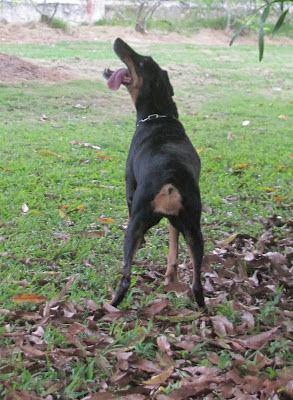 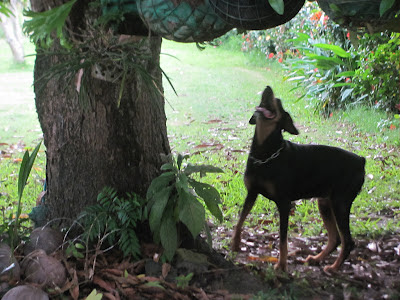 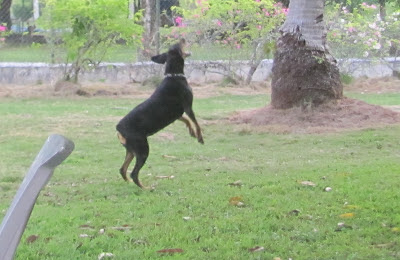 Is she after the birds or looking for Mangos?
﻿

My handy man been creating a sticky mess putting a coat of polyurethane on the inside doors.  These nice solid doors are loved by all that visit, but they needed some cleaning up.  And what better way than to add some clear finish creating a bit of sparkle to the old wood. 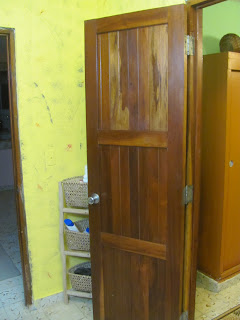 Clyde the handy house husband has turned in his hammer for an apron and headed outside to grill up some chicken.  With a beer in one hand and a plate of chicken in the other, he'll cook up some delectable delights for dinner.  Some homemade "ensalada repollo" or cole slaw made by me will make a nice side dish.

So just remember when one door closes make yourself another one.  Open it wide, walk through with confidence and embrace a new adventure on the other side....along the gringo trail.
at October 02, 2012