In a recent post I mentioned that Clyde had found some "espave" wood to make doors.  But soon after he began to work with it, he realized it was soaking wet and wouldn't work for this project.  He scraped that idea and went to buy some dry pine that he spotted in the rear of a hardware store on a prior shopping trip.

The first of the four doors is almost finished, lacking only a coat of polyurethane.  This massive four-foot wide door was designed to look like the interior doors that came with the house.  First we had to spray the door with a solution of boric acid and water as a protective barrier against termites.  After letting it dry we repeated the process two more times before coating it with stain.  I volunteered to stain the door after a subliminal suggestion by my dear husband.  Last weekend while shopping in the Do-It-Center, Clyde said he wanted to buy some rubber gloves to use when staining.  He picked out some yellow gloves in a size large but also picked up some pink ones in a size small.  When I asked why he suggested that maybe I'd like to help him stain the doors, and the pink ones were for me. 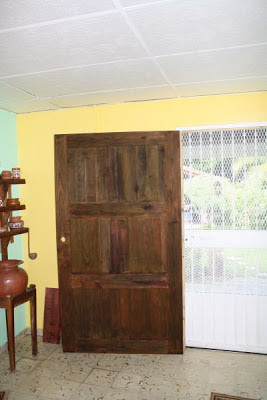 The First "Clyde made door"
Still needs some polyurethane

Being such a neat painter I really didn't expect much mess from the stain, but then this is Panamá and not the U.S. Since this is the first time either of us has used stain here, we didn't know what to expect.  Clyde suggested applying it with a brush to assure that it permeated into the lines on the doors design.  My thought was to use a sponge which would be less messy and more like the rag application I had done in the past.  I ended up using the brush as it seemed to get the stain on the door better but also splattered every where in the process.  Covered from head to tow with brown spots, I looked like I had some kind of disease.  After finishing up I had to wash from my face to my toes with terpentine, which burned my skin but removed the brown stain.  We decided that the next door will be stained before it's hung, keeping the mess outside.  Clyde actually suggested taking it down to stain, but I thought it would be quicker and easier to do it while the door was hung.  By doing it ourselves the custom made door cost less than $100, just a fraction of what it would have cost to have someone else make it.

Several days ago while Clyde was outside with Venus our doberman, he suddenly noticed that her mouth was dripping with blood. Since she chases lizards all day he thought that one probably bit her in the mouth.  He yelled to me to bring out an old towel to sop up the blood, and laid the dog down to tend to her wound.  Once the bleeding stopped he let her go and she immediately went back to chasing lizards in and around the bushes.  Clyde attempted to clean up the blood stains off the cement floor in the car port before they dried.

Later that evening while dining in our gazebo with friends, someone noticed blood pouring from the dogs mouth again, leaving a trail everywhere. Since Clyde had left the chicken coop open giving the birds time to "free range" a bit, a light bulb suddenly went off in our heads.  Apparently Venus had been taunting the chickens again and one of them bit her in the mouth, twice in the same day. Perhaps this will teach the dog a lesson on sharing her yard with another species?

Yesterday we made a quick trip to the vet in Coronado with Venus for her yearly shots.  While there we had the female vet look at her mouth just to be sure things looked normal.  She laughed after hearing that the mighty doberman had a run in with a tiny chicken.  She gave us a prescription of an antiseptic rinse to use on the dogs mouth twice a day for a week.  The vet thought it looked somewhat infected but not enough to warrent antibiotics.  After two shots, a de-worming chewable and the antiseptic rinse, we paid our $64 and headed home.

Last night while sitting in the gazebo again enjoying some barbequed shrimp, we watched as our crazy dog ran in circles.  She'd bark and jump up at the mango tree, watching the birds and bats fly in and out, then run through the gazebo, around the table where we sat and back to the tree again.  Round and round she ran like a turbo dog on speed, occasionally sitting down for just a minute before jumping up again.  This went on for four hours and the dog never seemed to tire out.  For an old dog she seems to have a lot of energy, at least when it's something that she wants to do.  Perhaps we don't need to walk the dog anyway?  If we just sit on our butts near the mango tree she'll run in circles giving herself plenty of exercise, while we relax.

Another day in Panamá, means another door will open or close, if the carpenter chooses.  And the stain splatters on the wall, are similar to the stain this blog leaves on the hearts of all that follow it...along the gringo trail.