On a trek through Panamá City today, some leftover signs advertising Ironman 70.3 Panama still remained, so I thought I'd mention it here for all of my athletic friends to be impressed.  This was Panamá's very first time to host the world famous event, that brought famous athletics from all over the world including Lance Armstrong. 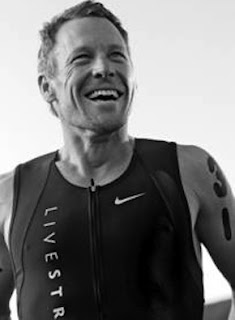 Participants had the opportunity to swim 1.2 miles in the Pacific Ocean at the entrance to the Panamá Canal, take a 56 mile bike ride along the Bridge of the America's and run 13.1 miles along the Amador Causeway within an eight hour period.  Seven time Tour de France winner Lance Armstrong came in second, to New Zealander Bevan Docherty who won by 31 seconds.  In an interview with the New Zealand Herald, Docherty said,  "It was quite an honor to see a seven-time Tour de France winner and someone you admire standing in second place below you on the podium. It was the highlight of my career."

Beven Docherty
Winner of Ironman 70.3 Panamá
Since this triathlon showed some highlights of Panamá City which is good for tourism, the Republic plans to host more events like this in years to come.  It's always fun to see world class events hosted in this tiny country that's only the size of Florida.  As for us we're headed out to celebrate Valentine's Day which is also our 8th Wedding Anniversary, and our first in our new country of Panamá.....here along the gringo trail.
at February 14, 2012