Today we each packed a suitcase and hit the road for a fun night on the town.  Once inside Panama City we found Amador Causeway, a picturesque part of the city full of shops, restaurants and touristy stuff along the beautiful waterfront.  Clyde has followed the island sounds of a duo called "Slim and Shorty," two guys that grew up in the Canal Zone who write and sing songs about life in Panama.  He read online that they were playing at the Amador Yacht Club tonight, but turns out he was mistaken.  Unfortunately, they appeared there last night so we had to make other plans.  It started to pour so taking in the sights along the causeway would have to be done on four wheels, instead of two feet.

Next, we headed over to Casco Viejo, the old part of the city where ancient buildings line the streets next to multi-million dollar restored properties. Usually an abundance of tourists can be seen here spending money in the tourist shops, restaurants or just taking in the lovely sights.  Clyde and I were on the prowl for clubs we could hit after dark for some hot salsa dancing.  But again the weather wasn't on our side and the downpour kept us in the car.  No tourists could be seen, just soaked locals trying to make their way home.

Before leaving Casco Viejo Clyde wanted to stop and see the famous Mercado del Mariscos (Fish Market).  The name "Panama" actually means "abundance of fish" and this smelly, bloody, fish market was a fisherman's paradise that lived up to that name.  And for a few local cats that managed to stroll into the market, they must have thought they'd died and gone to kitty cat heaven. 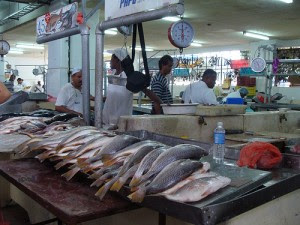 All joking aside,  I have to admit that I was impressed with a building the size of some grocery stores full of rows and rows of fish vendors.  I'd never seen fish so big right there in front of my face, permeating my nostrils with its stench.  There was tuna, corvina, red fish, lobster, squid and many others that I can't identify.  Shrimp from small, to medium to jumbo langostinos all selling for much less per pound then in the local grocery stores.  And the second floor of this building houses a restaurant where shoppers can buy some fresh fish and have it cooked to their specifications. 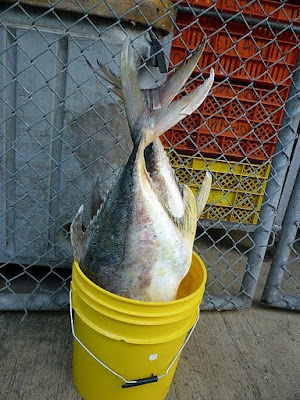 So I have to admit that I know nothing about fish, don't care to go out fishing, and I really did NOT want to get out of the car in the pouring rain to go into this place.  But Clyde wanted me to see it and I'm glad that I did.  There are smaller fish markets throughout Panama where local fishermen can sell what they catch.   Even in this little town of Capira, we have a local market right down the street from us.

Since we didn't find any spots to hit for nightlife and the rain never stopped, we decided to stop at the mall before heading home.  Albrook Mall is all decked out for the holidays with Christmas trees around every corner.  Crowds gathered round center stage to watch and listen to some young talent sing and dance to favorite tunes.  Clyde took note of some young, sweet things that rolled by on skates, donned in mini skirts and santa hats.  The stage came alive with costumed characters to delight both young and old as jingle tunes rocked the mall.  I enjoyed hearing favorite Christmas songs sung in Spanish, even though I couldn't quite follow along with all the words. 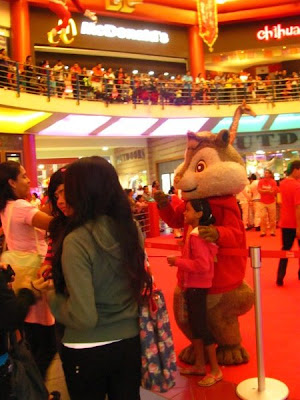 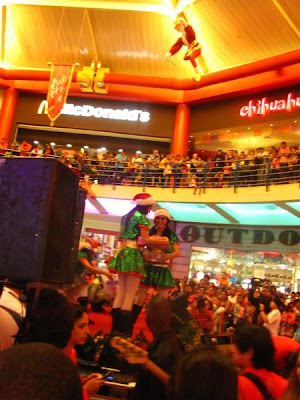 Store windows changed their "mannequins with attitude" to reflect the season too.  Some of the sexy female mannequins now have their nipples and cleavage covered  up with parkas and scarves.  Other mannequins are bundled up in winter boots and knit hats with itsy, bitsy, teenie shorts not covering much of their bottoms.  Thankfully, I did keep some boots to wear with my teenie, tiny "grandma" shorts!  Maybe next time I head to the beach in my bikini I'll put on some boots to get me in the holiday season.

Funny thing about all of this is that DECEMBER is the beginning of SUMMER in Panama!  Yes, from what we've been told pretty soon the rains will dry up and everyone will head out to the beaches as the dry season begins.  Patiently I wait, since my tan is dwindling and my bikini's are collecting dust waiting to be worn.  I long for the days when I'm sporting a deep dark tan again so that I "blend in" a bit more with the locals.  Back in the states when I was working, my supervisor was a light complected black woman and I would get as dark as her.

But for now we have fully packed suitcases and no where to go.  Who knows.......maybe we'll wake up tomorrow and come up with a new plan.  But for now we'll just sleep on it and see where our travels will take us in the morning.  In the meantime, I'd better go dig out my winter clothes and boots so I can be a fashion forward gringo, strutting my stuff in the Panama tropics.........along the gringo trail.
at November 19, 2011