Applying for a driver's license here in Panama is almost like being a contestant on the "Amazing Race" television show.  It's a treasure hunt of searching for buildings with no addresses, paperwork that seem's useless and paying out money for who know's what reason. But like everything here in Panama, they have their own funny way of doing things.  But if we want to live like Panamanians then we must do what we're told and follow the rules.

First stop yesterday was a trek up to the American Consulate building to start the process rolling.  When pulling into the parking lot the guard stops each car to ask what business they plan to conduct at the consulate.  Once he is informed he instructs each car to park.  Then everyone walks up this long hill into the first building, to stop at the first security check point.  It's here that we leave our cell phones and have purses and any other hand held objects scanned.  The walk up the hill continues into the consulate building where we next had to turn in our umbrellas. I suppose the reason for this is so we wouldn't smack  an employee upside the head when frustrated.....due to the silly procedures that they impose at this place.

The cashier window was our first stop to pick up paperwork for the driver's license.  We were greeted by a very cheery American women who's smile turned upside down when she asked "do you have an appointment" and we said "no."  Who knew that we needed an appointment just to pick up blank documents?  Where's that umbrella when we need it?  She handed us the paperwork and checked with the notary to see if she could fit two naive gringo's into her busy schedule.  We were told that "yes" she could see us today but we'd have to wait.  Since waiting has become a way of life here in Panama, this was normal.  When they finally called us back to the window we had to pay our fees of $50.00 each and the women notarized the papers.  Then we were given a list of instructions on where to go for the next clue to solve this puzzle.

We had to drive to the El Dorado section of Panama City to find the Ministry of Foreign Affairs for certification of these documents.  Since there are no "real addresses" in Panama, the directions said this building is located in Sun Plaza, near National Bank of Panama on Avenida Ricardo J. Alfaro better known as "tumba muerto"  or grave of the dead.  Here we had to have someone else look at the papers, then send us downstairs to the bank to pay $4.00 and another $4.00 for eight stamps. We had no idea what these stamps were for, but we had to play the game.  The women at the Ministry of Foreign Affairs explained that the documents would be ready for pick up at 4 pm, at which time we would have to come back.  By this time it was too late for the next step which would take place at the actual driver's license office somewhere else.

The American Consulate paperwork had instructions to go to a website and there we would be given the next clue as to where we had to go today.  When Clyde looked up the information he noticed there was an office in La Chorrera which is only a 15 minute drive from home.  "Great" we thought, and headed out to find this place called SERTRACEN.  The directions or clues indicated that this was located in Plaza New Orleans, "fuenta" in front of or across from Plaza Italia. I noticed a sign pointing to Plaza Italia but Plaza New Orleans was no where to be found.  We stopped in a gas station and Clyde asked a man for directions.  The man asked us to wait a minute and jumped in his car and waved us on to follow him.  We followed the man in a big loop which brought us back to where we began.  The man hopped out of his car and pointed to a bulding that said "Escuela de Conducir" or Driving School.  Although we didn't think this was the place to get a driver's license, we knew we were getting warmer.  Clyde walked in and asked for yet another clue and was directed a few doors down in the same plaza.  He motioned for me to get out of the car and go with him. We only found the place by the little paper sign on the front door since the BIG SIGN was covered up by a red, white, and blue banner that was put up for the holidays. 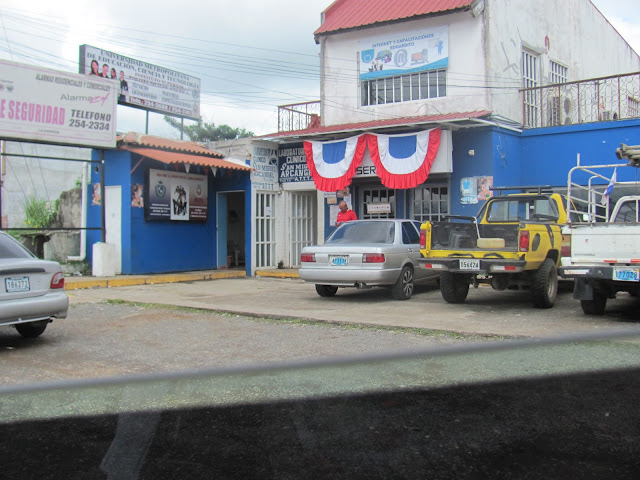 As you can see (or not)
This is called The Sertracen Office
In we went to this tiny office with one girl behind the counter.  We took a number and sat down until it was our turn.  Once we presented our paperwork the girl explained that we could not get a "first time" license at this office. She went on to explain that we would have to go to the office at Albrook, in Panama City.  Before we left she looked over all of the paperwork and noticed that our passport number was not on our blood type report. She suggested that we take the paperwork back to the lab to have this added.  Fortunately for us, the lab was close by and had she not caught that we would have had to have more blood work done.  Now off to Albrook and since we've spent so much time at Albrook Mall, we knew where this building was......or did we?

After driving around the mall we decided to stop and ask a parking attendant for directions. She directed us around about until we stopped to ask a taxi driver for the next clue.  He told us it was near the El Rey Supermarket near Albrook which we'd been to before, and we knew exactly where we were going.  Near the supermarket we found a maritime building where Clyde asked a security guard and he pointed us in another direction and said it was nearby some new construction.  He was right and finally we saw it.....a big blue building with the work SERTRACEN on it.   We have no idea what this word means, but it seems to us that Panama sub-contracts these services out to be done for them.

Once inside the girl at the front desk reviewed all the documents and passed them onto the data entry department.  There we answered many questions and had a photo taken. From there we were escorted to another station to take a vision test, then into another room for a hearing test.  Once we passed with flying colors and paid $40.00 each we were awarded the grand prize......a Panama Driver's License!  And it only took three days, a full tank of gas, six meals eaten at restaurants, and a few more gray hairs but it was all worth it in the end.

For us this was just another bump in the road, another adventure in the every day life of living in Panama.  With each adventure we learn a bit more Spanish, and a better understanding of how things work here. Maybe someday we'll have it all figured out, and then they'll change the rules of the game. Tomorrow's just another day of whatever comes our way.... along the gringo trail.
at November 09, 2011