As I skimmed over the faces and heads in the crowd, I didn't see another blond anywhere.  Immersed among the people like never before, as we stood in the crowd watching the parade.  Today is Flag Day in Panama which is just a continuation of this week- long celebration of Independence Days and events.  On his way home from the store, Clyde noticed the bomberos (firefighters) in full dress uniform and came home to get me to go check out the parade.  The procession was led by The Cuerpo de Bomberos (Fire Department) of Capira. All decked out in crisp red dress shirts, white trousers and black boots, they were the official start of the parade, at least from what we saw.  Clyde literally ran after them almost joining the parade at first.  Once he was able to get in front of them he took videos and still photos of his fellow firefighters who so proudly strutted down the street. 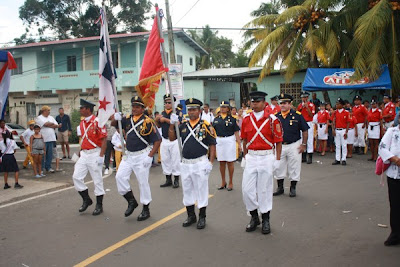 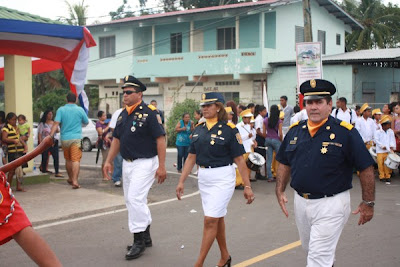 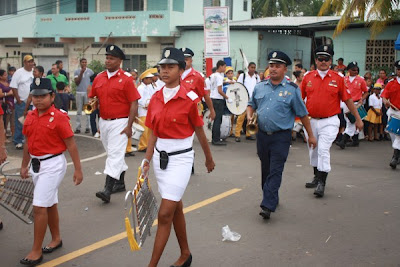 The bombero's were followed by school bands each dressed in unique uniforms. The boys pounding away at drums while the girls played xylophones, symbols or performed dance routines.  They seem to keep it simple here as those were the only instruments used, but it still made for a nice mix of sound.  The kids were adorable and when Clyde pointed the camera at them they posed, smiled and gave us some wonderful attitude.  Maybe they thought he was from a newspaper or television station since he has this impressive camera. 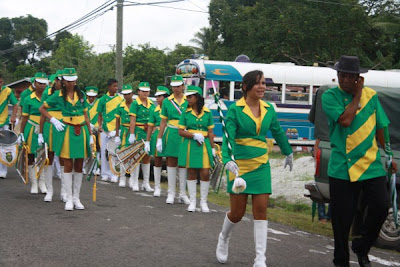 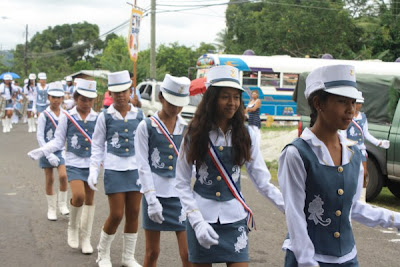 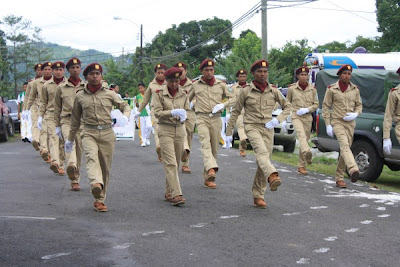 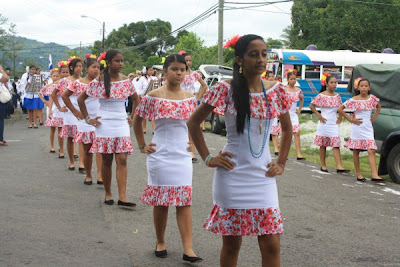 The precious little girls proudly displayed their "polleras," while they boys looked so cute in Panama hats and white guaybera shirts. The pollera is the official dress of Panama and worn during folkloric or traditional dances.  The guaybera shirts always take me back to the days of "I Love Lucy" since that's always what Ricky wore. But then he was from Latin America and that is what they wear here. 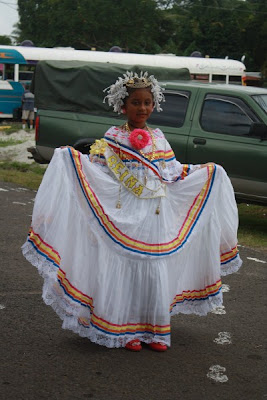 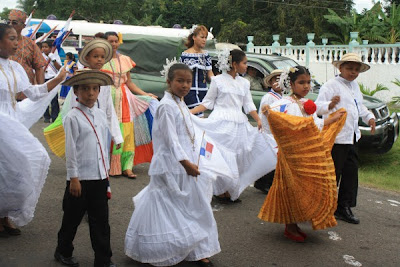 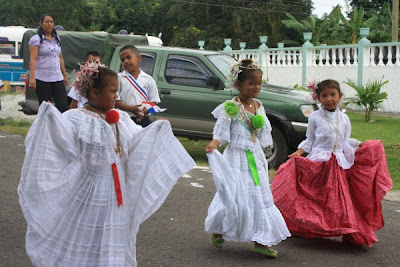 Despite Panama being a poor country the school band uniforms were each different in color, style and uniqueness and I was impressed.  Toward the end of the parade it started to sprinkle which cooled off the sweaty crowds and marchers too.  We headed back to the house to have a bite to eat and look at the pictures. Clyde had taken close to 500 pictures and spent some time going through them to pick out the best ones to post here.

As we stood among the people I couldn't help but feel a sense of Panamanian pride.  Here were are, two gringos from one of the richest countries in the world, who have come to this poor but proud country to live among them.  As Panama so proudly celebrates it's Independence we help them rejoice that they have become who and what they are today.  There's a bit of gringo shame that as Americans we have so much, yet we moved here to take advantage of living on so little.  And despite our fair complexions and light hair, we try to blend in and become one with the locals.  We shop with them, eat like them, sweat with them and never look down at them as if we're better.  We continue to learn their language, their customs and celebrate the Independence that makes this itsy bitsy country so proud!  And we live among them as proud gringos, reaping the rewards and having the time of our lives...along the gringo trail.
at November 04, 2011