Clyde started a "little black book" today only problem is that at his age, the women in it are all doctors!  Since Clyde manages to get in trouble just about everywhere, the doctor's office is no exception.  Today he met with an opthamologist in Panama City for the first time, and it just happened to be a gorgeous, female Venezuelan doctora.  She was dressed in a white lab coat, black slacks and zebra printed wedge sandels, none of which Clyde managed to see. The only thing he said after we left her office is "man she was gorgeous" to which I lovingly slapped him upside the back of the head. 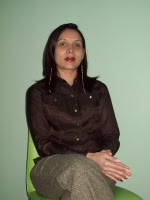 Dra. Maritza Lopez Moreno
Since Clyde has now had two cornea transplants in both eyes, it was important for him to find an opthamologist here that was familiar with this procedure.  We looked for the best in the country and chose Dr. Maritiza Lopez Moreno because she works out of Hospital Punta Pacifica, the premier hospital in Panama.  Punta Pacifica Hospital is an affiliate of Johns Hopkins Hospital in the U.S. and therefore is a state of the art hospital with the best trained doctors and staff.  Having had both surgeries done at Baylor Eye Institute in Houston, TX done by Dr. Bowes Hamill who is said to be the best in the U.S., he went from the best to the best.

When he would have an appointment in Houston we would enter a huge building and check in at the front desk. Next we went upstairs and sat in a large waiting room surronded my 15-20 doors where patients were being seen.  Clyde would get called in and a tech would start the process with preliminary stuff. Then he'd be sent back out to the waiting room.  Next he would get called in again and be seen by a resident or student doctor, since this is a teaching hospital.  Finally after an hour or so had gone by, he'd get to be seen by the doctor.  Last visit there before we left the states was over $300 since we no longer had insurance.

Today in Panama City we arrived at the registration desk where Clyde was given one sheet of paper to fill out.  A few minutes later Dr. Lopez called us into a small office. She asked him questions, wrote down some notes, did an exam, some further tests, checked his eye pressure, and gave him her card which included her personal cell phone number.  There was no nurse or any other staff in her office, just one doctor.  On the way out we paid $50 to the receptionist and were on our way.  At Clyde's request I will mention again that the doctor gave him her personal cell phone number, which is NOT uncommon for doctor's here, but we won't tell him..... let him think he's special.

After that we stopped at the mall for some holiday shopping and then headed home for the night.  It's been a long day so these two tired gringo's will say good night for now.  If the rain's don't stop soon we may have to get a boat to paddle our way down the next phase...along the gringo trail.
at November 30, 2011