A little update on my last blog about superstitions, like I knew would happen my dear sister would better remember mama's weird hocus pocus.  Mom or grandma would kiss our forehead three times, each time they would spit slightly away from us, then wipe our forehead.  From there to the bottom of our cheek three times to repeat the same ritual.  We would yawn one more time and then it would pass and the spell would be removed.  This was done when a child was "overlooked" or just looked at too much by a stranger and it would cause us to be over tired.  Hell in my day we thanked our lucky stars when kids were tired and wanted to sleep!

My wonderful husband Clyde finished our new computer desk.  It is amazing what talent he has and he is willing to share it so willingly with me.  If you remember, he finally found the wood he needed after talking to expat friends David and Stephanie.  We decided on Teak as it is so beautiful and affordable here in Panama. The wood was not far away, but in order to acquire this wood, he first had to buy the squared off log and then have it cut into workable pieces. 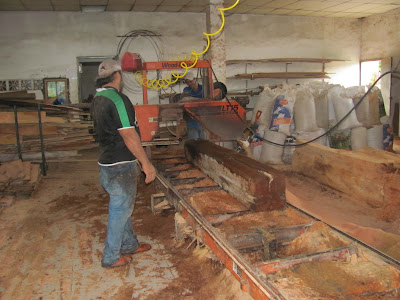 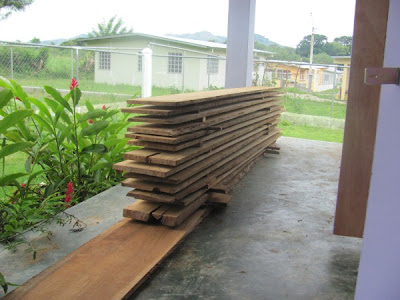 Teak Boards stacked up for drying 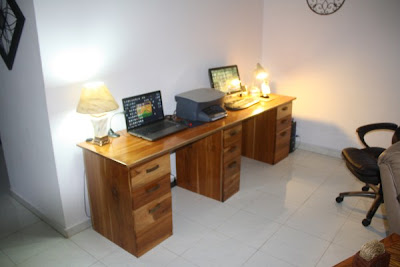 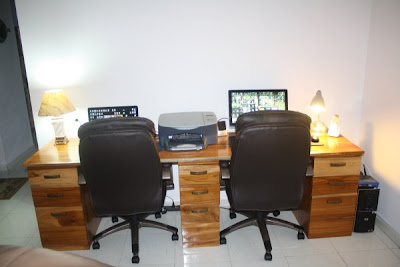 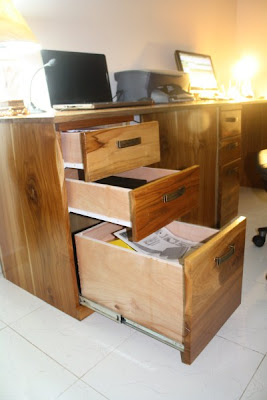 The Drawers
I came down with something like the flu last night and couldn't be bothered to get off the couch.  It hit me suddenly with a temperature of 102 degrees, headache, stomach ache, my face hurt and I was freezing and bundled up in winter pajamas.  A while later I began to sweat so I knew something was not right with my body temperatures.  The overnight was spent running in and out of the bathroom so I didn't get much sleep. Today I'm feeling a bit better and my temperature is down to 99 degrees, but still sweaty and not feeling like myself.  I've already taken one cold shower today and will probably take a few more so let's hope that my face doesn't freeze for all eternity.  (reference to last blog on local oddities).

Next on the list of Clyde's honey-do list is that I want some shelves to organize my shoes.  And I also need some storage in my bathroom, probably in the way of an over the toilet removable shelf unit.

Monday is yet another Independence Holiday for Panamanians. This time it's the Independence from Spain which was achieved in 1821.  I'm sure there will be fireworks, parades and much more since they like to party big here.

We've been looking into health insurance and found a clinic in Coronado called San Fernando Clinic that has 24 hour emergency services, as well as specialists that come in on a weekly basis.  The day that Clyde got stung by the scorpion got us thinking that we had no idea where to go in case of an emergency.  So now we know where to go and if we need serious medical attention they can transport us into Panama City where we can be treated at some of the finest hospitals in the world.  We found an affordable health plan that will take care of all our medical needs in Panama.  Whenever we travel we pick up travel insurance which will cover us during the trip too.  And the nice part about this clinic, since it's in Coronado which is an expat town, the staff at the clinic speaks English.

To my surprise, they actually sell live Christmas trees here.  I always thought spending money on a live tree just to throw it away after a few weeks, was a big waste of money.  Certainly this must be an American thing since we are a country that likes to waste money.  But apparently not, since Panamanians like freshly cut Christmas trees too.

Lazy day at home today shopping for Christmas presents online.  It's more fun doing it the real way, but since shipping from Panama to the states would be pricey, it's better to order from U.S. stores.  I had an idea to send some Ron Abuelo Panamanian Rum to all of our kiddo's (who rarely bother to read this blog) but we couldn't find any such thing online.  So if our darling children get around to following our blog, they can be assured there will be NO Ron Abuelo under their Christmas tree this year.  Oh well, guess they'll have to come visit for some good ole cheap local rum that sells for a mere $6 a bottle.

Drove over to Coronado to check out the new El Machetazo store, which is Panama's version of Wal-Mart.  Near the entrance we stopped for a free sample of "seco" which is the national drink of the country.  It's similar to vodka and added to different mixers.  These were not tiny samples with one sip in them, but a full size glass of a pineapple juice mixed with seco.  We sipped on our cocktails as we browsed around the store. 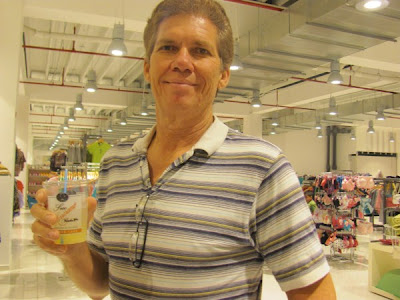 Out from behind the camera with my drink
HEY!  I kinda enjoy this shopping thing!
We soon noticed that there were three floors to this place, and headed to the escalator to go upstairs.  Since we had already picked up a few things, we wondered how would we get our cart up to the next floor, or should we leave it here?  In between the up and down escalator was a third section for carts to ride in.  Why has no one in the U.S. thought of this yet? 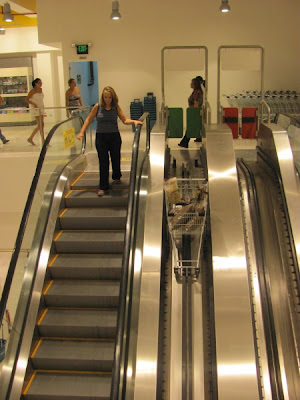 Only problem is that they make you take
your child out of the basket first.
Lately while driving around we noticed a strange phenomenon for Panama.  Signs on the road!  In our past exploratory trips, we would keep on passing the roads leading to other smaller towns.  Now the Pan American Highway has these wonderful blue signs up for almost all small towns. 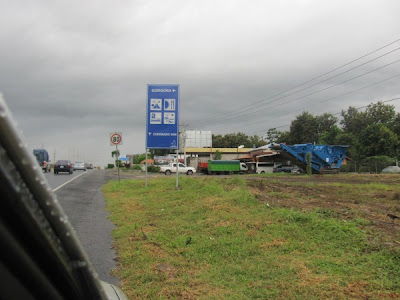 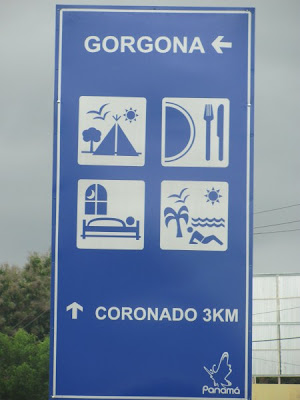 You have no idea what a GIANT step this is!
Panama is NOT known for signs anywhere.  There are few street signs since buildings don't have addresses. For example, our address is "Residential del Oeste......ultima calle (last street), casa #26 (house #26)."  Ads for businesses will say something like "next to McDonalds......in front of the water.....next to the hospital."  And people give directions in the same manner.  Something like go straight to the green house, turn right and proceed up the hill until you see where the old cement factory used to be then go a long way until you see the park."

Back home for the night now, getting ready to veg out in front of the tv and complain that there's nothing to watch.  Same as back in the states, except that most of the nothing to watch here is in Spanish. But that's just the way it goes in a Spanish speaking culture here.... along the gringo trail.
at November 26, 2011