After a relaxing day on Sunday we had dinner with friends and on the way home another car decided to plow into our car.  Clyde was trying to make a left turn not far from our house, when another car also tried to turn left but went right into our car.  Now the passenger side door barely opens due to dents, and the front bumper and front fender were smashed too.

The car that hit us was full with two young Panamanian couples, a baby and a toddler, neither seemed to be restrained.  Clyde pulled our car off the road since traffic was heavy, being a Sunday night as weekend beach goers headed home.  The young man left his car in the middle of the highway with his wife and two children sitting inside.  Clyde offered them the use of our back seat and encouraged him to move his children since it was very dangerous to leave them in the car in the middle of the highway.  He declined our offer but after a while he did pull his car off the road too.

The young man driving the other car asked Clyde "tú eres es culpable?" which means " are you taking the blame?"....he was asking Clyde if he was admitting fault.  Clyde said NO which didn't make the man happy.  We called 911 to get police to the scene, but the call didn't go through.  Police drove by but none stopped.  Our insurance company never answered the phone either, so we'll have to contact them today.  Both Clyde and the other guy filled out paperwork that was provided by the insurance company and mandated by the government to have in our vehicle , sort of like a police report in the U.S.  We both filled out our own forms, shared information and signed them.  On the form it had a box to check off if we "took responsibility" for the accident.  We both checked off the "no" box.

The other driver did have insurance which is good, and he put down that his car is a 2012 but we thought it looked old. After we left the scene I encouraged Clyde to drive to the local police station. We asked the police if this form was all that we needed and he said yes it was so we went home for the night. 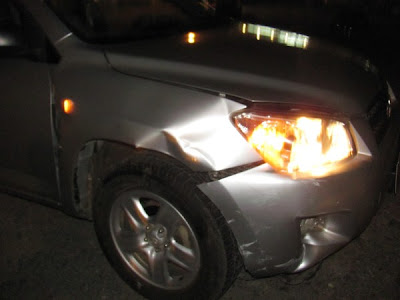 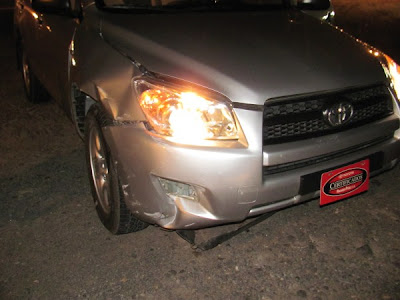 ﻿
Today it was off to Panamá City to find Mapfre, our insurance company and file a report with them.  On our way into the city the man that hit us last night called Clyde.  This guy doesn't seem to understand that we don't speak much Spanish and likes to hear himself  talk.  To shut him up Clyde said that we were on our way to Mapfre for a 4pm  appointment.  We had no appointment with the insurance company and had just planned so show up.  We easily found the building for Mapfre which was located in an impressive office with lots of dented vehicles parked outside.  They did provide us with an agent that spoke English who filled out the report very quickly and efficiently.  He told us to wait a few minutes for someone to come look at the car and take pictures.  We had another appointment with our lawyer Alexandra, to open a bank account and had to leave the insurance company office to meet with her.  After explaining to the receptionist that we would return in a few hours we took off to meet the lawyer.

Anxiously hurrying through traffic, we were already late for our 2pm appointment with Alexandra the lawyer, and the bank she was taking us to closed at 3pm.  Opening a bank account in Panamá is not an easy task and is much easier with a lawyer involved.  First we had to provide 4 personal letters of reference for each of us, along with two bank reference letters for Clyde and one bank reference for me.  Clyde also had to access statements from each bank and provide the bank here with these, before we could begin the process.  The first bank that Alexandra tried would NOT accept a money transfer from a U.S. bank, so she tried another one.

Today we had to appear at the bank and show our original passports, some form of identification from the U.S., along with our Panamá identification. After signing about a dozen or so papers each, we were issued a debit card for a checking account here.  By now it was after 3pm and the cashier at the bank was closed, so they could not accept our $1000 deposit to open the account.  We were instructed to go to another branch of the bank that was open until 7pm to make the deposit.  If we did NOT make the deposit TODAY by 5pm, the account would be no good and we'd have to begin the process all over again.

While sitting in the bank, Carlos the man involved in the accident with us called Clyde's phone three times.  He ignored it since we were in the middle of business.  Off we went to the other branch of the bank to make the deposit by 5pm as we were instructed to do.  Then we would try to make it back to Mapfre before they closed at 5pm to finish the process we had started.

Right at the stroke of 5pm we pulled into the Mapfre parking lot and Clyde ran to the door before they closed.  The guard would not let him in so we got back into the car and called Carlos, the man involved in the accident.  Since he didn't answer his phone, Clyde left him a message in Spanish telling him the office was closed.  As we started to pull out of the parking spot Carlos came walking toward our car.  Clyde opened the window and he proceeded to yell at us in Spanish. From what we understood he showed up at Mapfre since Clyde mentioned we had a 4pm appointment there, and had been waiting two hours for us to arrive.  Upset about the wait and insisting that we accept blame for the accident, Clyde yelled back telling him again that we did not understand what he was saying.  Come to find out that an insurance agent was waiting inside for us to meet with Carlos.

Once inside the agent explained that Carlos believes that Clyde was at fault.  If we choose NOT to accept the blame then both parties must go to the transit authority to file a report and it will go before a judge and he will decide.  The insurance agent also explained IF we were at fault we would still only pay our insurance deductible and Mapfre would pay to repair both cars.  If the other guy is at fault then his insurance would have to pay for repairs to his car.  And he said that unlike the U.S., our insurance premiums would NOT increase since this was only a minor accident.

So tomorrow it's off to the transit authority in La Chorrera. We are hoping to bring along a friend that speaks better Spanish than we do to help us out.  Another exhausting adventure filled few days, here ....along the gringo trail.
at January 30, 2012