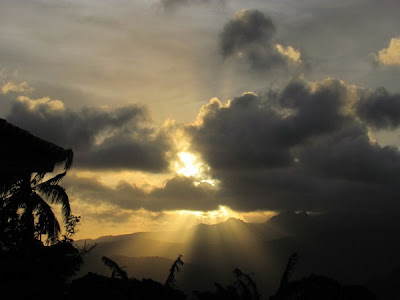 The Last Sunset of the year
over Panama﻿
In keeping with Panamanian New Years traditions we decided to make a muñeco of our own to burn at midnight.  This life-sized doll is a representation of all that we want to see go away. A symbol of those that had wronged us, mistakes we've made and things we'd rather forget as we begin another new year. 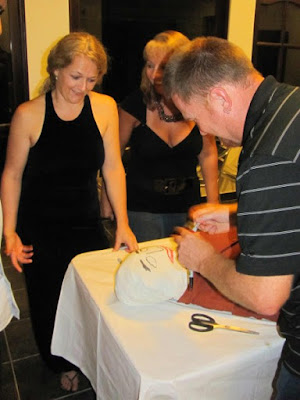 Got some "serious" muñeco making
going on! 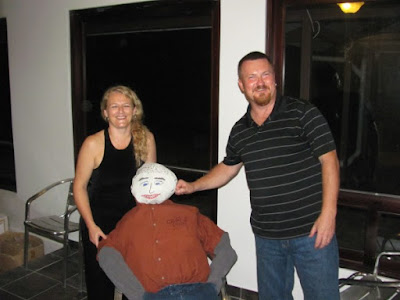 Phil and Sharon with our Muñeco
The body burning took place at the mountain hide away of Sharon and Phil in Chicá, Panamá.  We joined some friends for a barbecue with all the trimmings.  Once our bellies were full, Sharon suggested that we make a muñeco out of some old clothes that were destined for the trash.  She gathered up brown paper to stuff the clothes with and soon our life like creature emerged.  The locals here in Panamá create these dolls and set them ablaze during New Years Eve celebrations. 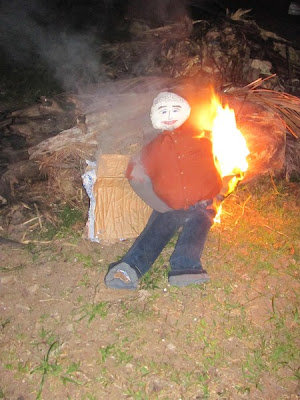 Do NOT ask me why
his hands are in his pants 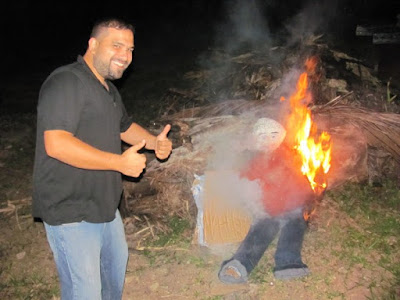 This is David and tonight is his wedding anniversary 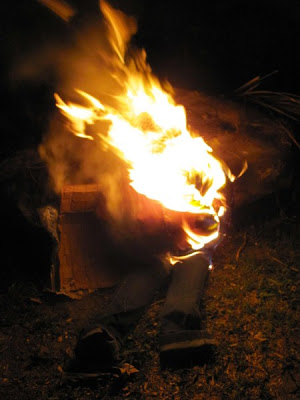 And Another New Year
Begins!
Since their home sits nestled in the treetops at an elevation of 2,300 feet, we were treated to a panoramic view of fireworks as the clock approached midnight.  We watched from the balcony as the dark sky awakened into a colorful rainbow of lights.  As the colorful lights burst over the mountains, the sparkling residue fell like a gentle rain over the hills and valleys of the countryside.  Our group of new friends welcomed in the new year with a champagne toast, and much gratitude for our new lives here in Panamá.  Then we gathered to watch our creation go up in smoke against the dark sky that glimmered with stars.

The chilly night air cooled us off and woke us up for more drinking, eating and talking.  Eventually, we left and our car crawled down the mountain through dense fog. We passed by groups of locals sitting in tiny roadside cantinas with music blasting.  And we carefully had to dodge others walking along side the dark road and made our way around local buses stopping to let people off.  Hard to believe these tiny villages were alive and kickin' in the middle of the night.

Safely we arrived back at our casa to find a few neighbors still partying though some were quieter than others.  We closed the bedroom windows and turned on the air conditioner to block out the noise.

Before we drifted off to sleep around 3am we felt grateful at what we accomplished this past year.  We said adios to the working world, simplified our lives and took the plunge.  Some talk about it, many are afraid to do it, but we did it.  We are living the dream of early retirement here in Panamá.
at January 01, 2012