Another first for us in Panamá happened yesterday, as two friendly faces from the past dropped in for a visit.  Seeing Panamá for the first time, Art and Jan flew into Panamá City on Thursday and spent some time with us yesterday.  After catching up a bit they wanted to try some Mexican food "Panamanian style" so we took them to see our friends at Paco's Restaurant. 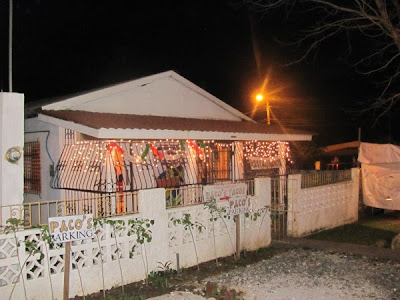 As the sun set over La Chorrera the four of us sipped margaritas at a roadside table as other patrons shuffled in.  The crew worked diligently making room for the entertainment of the night, a local Mariachi troupe and Karaoke guru.  Later we were joined by other friends, as we added a second table and then a third.

Mariachis originated in Mexico in the state of Jalisco and were common in south Texas with it's Mexican influence.  Admittedly, I was not a fan when we lived in Texas because Mariachis would ruin a quiet dinner.  They commonly walked in between the tables in Mexican restaurants singing loud songs in Spanish and playing instruments.  Although meant to be romantic love songs, the mood was lost as they belted out a songs in my ear while I was trying to eat.

Last night at Paco's the band kept their distance from the tables creating a more enjoyable experience.  And although there wasn't a Mexican in the band, they dressed and looked the part right down to the pudgy bellies.  We almost felt like we were in our old favorite restaurant back in Corpus Christi where the waitresses knew us.  Instead we're far away from Texas, here in this foreign country, in a new restaurant where Isabel the waitress also knows us.  Hmmm.....do you see a pattern here?

Once the Mariachis were through, a disc jockey arrived for some karaoke. The word "karaoke" originates from two Japanese words  "kara" which means empty, and "okesutora" which means orchestra. It is believed that karaoke began in Japan in the 1970's then it spread to Asia and eventually the rest of the world.  A well known Japanese entertainer named Daisuke Inoue, was asked by friends to provide recording of his music so they could sing along on vacation.  This gave him the idea to invent a machine on which he would record music for people to sing along with.  Unfortunately, Inoue never did patent his machine and in 1975 a Filipino inventor named Roberto del Rosario made a similar device and did get a patent in the 1980's. Rosario still holds the patent today for what we call a "karaoke machine."  Nowadays, karaoke provides a platform for all , who wish to take center stage and show the world that they can or cannot sing.

Back in the states we often found ourselves around karaoke, but this was the first time for us to experience it Panamanian style.  Many of the singers entertained us in Spanish and some of our friends and my dear hubby also took center stage.  The loud music occasionally was muffled by the explosion of fireworks or the noise of traffic.

As the time flew by and the waitress came over to say she was leaving for the night, we thought it was an appropriate time to call it a night.  Our tired bodies made it to the car around 11pm from a dinner that began at 6pm.  Yes, I think we've adapted to the slow pace of life here very nicely.  Dinners out that used to take 30 minutes now linger on for hours.  They say everything takes longer here in Panamá and now we see why.  Perhaps we've developed a new skill that needs continual practice. The art of "doing nothing" or not having to hurry, also known as "mañana" time.  It's a difficult task, one that will take us a lifetime to master. But we're surrounded by good teachers who all live it on a daily basis here in Panamá..... along the gringo trail.