Our Magical Mystery Tour In Liverpool.....

Today we hopped on board a big, yellow, multi-colored bus for "The Magical Mystery Tour," in Liverpool. Our knowledgeable guide grew up in the same neighborhood as Paul McCartney and went to the same school, Quarry Bank Grammar School. He was full of tales, information and knowledge of the famous foursome who won the world over with their music. For two full hours he enlightened us with Beatles facts, information about the city, and allowed us to walk in the same footsteps of John Paul, George and Ringo. In between stops and facts we listened to Beatles music while the driver of the bus banged on a tambourine. We rode around with a smile on our faces and a new understanding in our hearts and minds of where the famous band members came from. 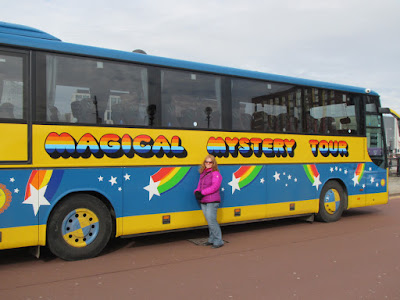 Ready To Hit The Road 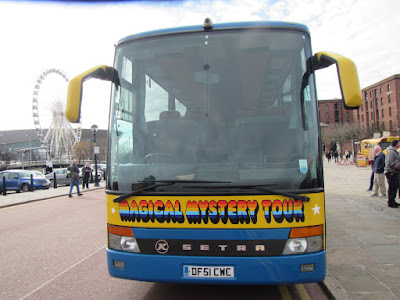 The following locations were included in the tour: 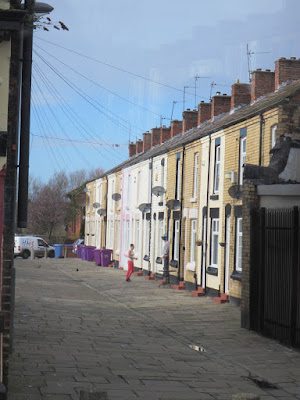 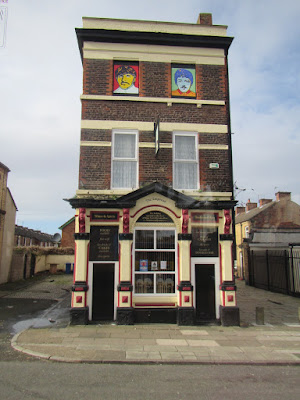 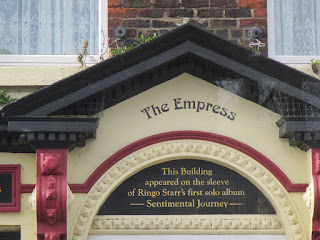 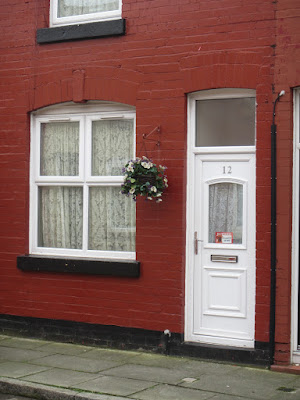 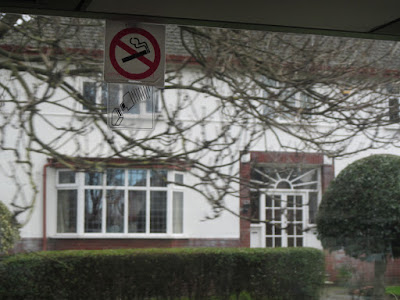 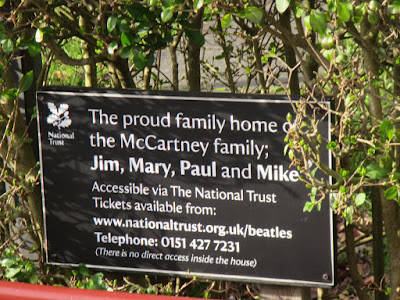 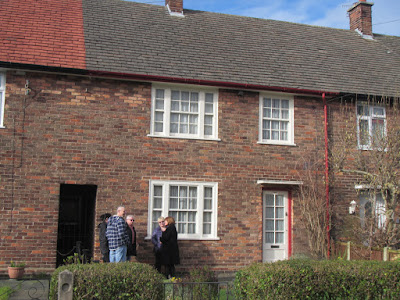 
One of the stops was the famous Strawberry Fields made famous by the song. What was once an orphanage owned by the Salvation Army and later a home for unwed mothers, it's now nothing more than an overgrown field with a red gate and sign. Our guide told us that John Lennon grew up nearby and would play in the garden of the fields. John would climb up into a tree to sit and watch the girls go by. Since his Mom passed away when he was just 14 in a car accident he was later raised by his aunt. His aunt continually warned John saying, "if those people in the home catch you in that tree they're gonna hang you." Hence the line in the song, "it's nothing to get hung about, Strawberry Fields forever." 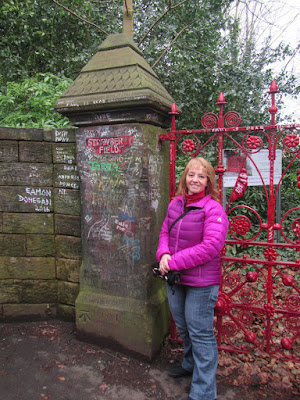 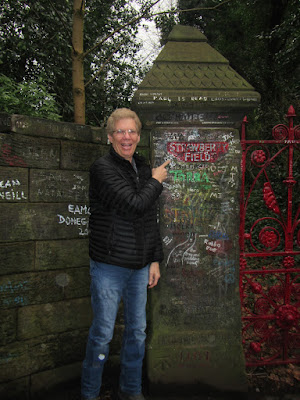 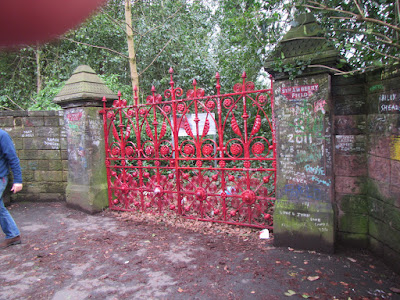 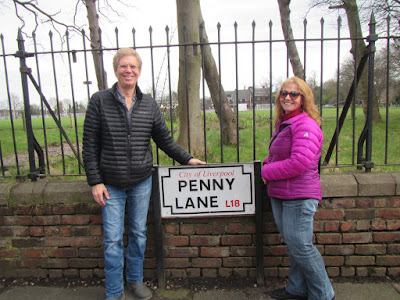 No Need For An Explanation Here 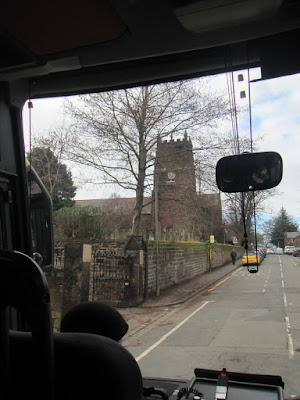 St. Peter's Church With Cemetery With
Grave Of Eleanor Rigby


John Lennon's Mom died instantly while crossing the street in front of their home. The man that was driving the car was a police officer who was not yet licensed but only had a learners permit. It went to court but the police officer was acquitted and later released from the police department. The former police officer went on to work for the Royal Mail Service as a mail carrier. His route included the neighborhood where George Harrison lived where he had to deliver thousands of fan mail letters to the home, making his mail sack every so heavy. It is believed that John's dislike for authority, the establishment and the police stems from this fatal tragedy. 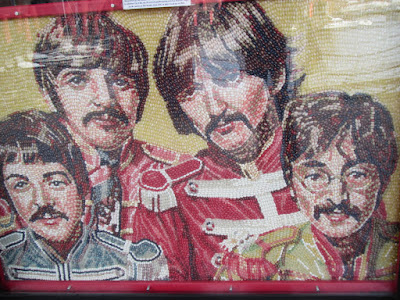 A Mosaic Done Out Of Jelly Belly's In A Store Window 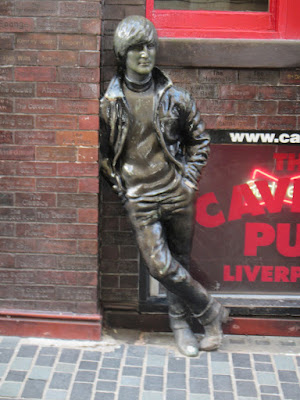 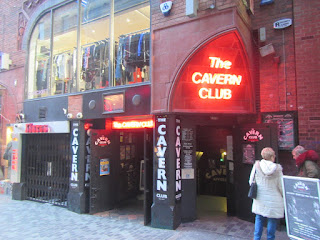 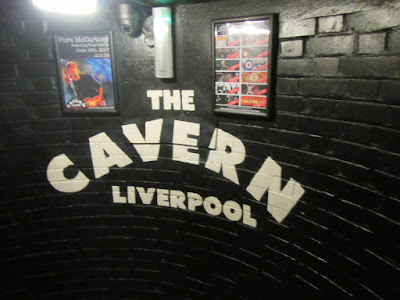 Entrance Down The Stairs 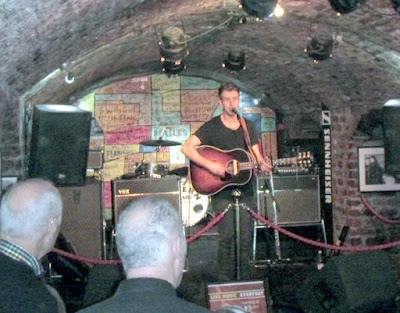 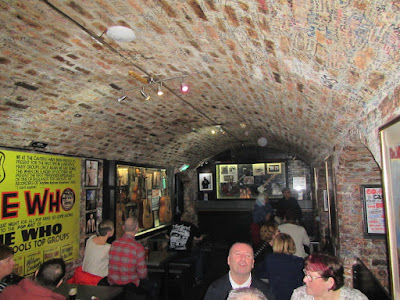 Inside The Cavern Club 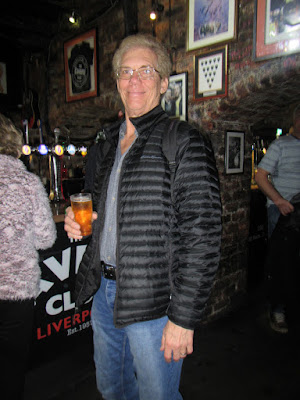 Clyde Having A Beer
Cost Was Only 1.90 pounds 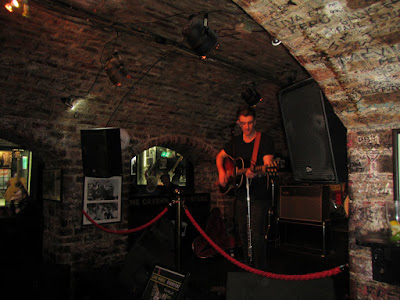 Those are just a few of the many stories we heard along the way. Our guide pointed out places the boys frequented, where they first met, and so much more. St. Peter's Church Hall is where John and Paul met for the first time. Across from the hall is the church and cemetery where someone named Eleanor Rigby is buried, apparently the same one mentioned in the song?

We drove down Penny Lane which is where John and Paul used to meet to take the bus into town. What began as just a street is now a section of the city because the name became so famous from the song. As we drove through the intersection the words of the song rang true as we saw it come to life.

On the corner is a banker with a motorcar,
And little children laugh at him behind his back.
And the banker never wears a mac (British slang for raincoat)
In the pouring rain, very strange.

The intersection of Penny Lane has a bank, a round-a-bout, and a fire station just like the words of the song.

In Penny Lane there is a fireman with an hourglass,
And in his pocket is a portrait of the Queen.
He likes to keep his fire engine clean,
It's a clean machine.


Behind the shelter in the middle of the roundabout
The pretty nurse is selling poppies from a tray (commonly seen in the UK)
In Penny Lane the barber shaves another customer, (there is a barber shop in the intersection too)
We see the banker sitting waiting for a trim, (and there is a bank and fire station)
And then the fireman rushes in
From the pouring rain - very strange.

Fascinating to see the song come to life right there in front of us. But then those of us that write, be it songs, blog, articles or whatever.....just write from what we know.
Our Magical Mystery Tour ended at the world famous Cavern Club. While some say the original club was demolished, our guide assured us that it was NOT. He did explain while they were working on the subway underneath the club it did undergo some changes and eventually a full remodel. But what we saw today was most certainly the real, original club where the Beatles performed nearly 300 times over a four years period. They would perform three to four times per day sometimes to a packed house of screaming fans.
We were wowed as we entered the cave like structure to find a young local musician singing Beatles songs. For a while we sat and enjoyed the ambience and took note of the stage wall that was signed by every famous musician that played there through the years. It was the perfect ending to our day of Beatlemania that we'll remember fondly as we think of our time in Liverpool......along the gringo trail.