This afternoon we finally got to do some exploring, which always includes getting lost along the way. We took a wrong road at first and got to experience our very first Panamanian police random check point,  which is very common here.  Good thing that I was driving since Clyde is still without an official US license to use here.  The officer was dressed in an army green shirt and pants, black bullet proof vest and boots and  had a large black rifle at his side.  After an initial greeting I handed him my Texas license and asked him  in Spanish if this was the way to Campana.  I tried to relay the message that we had just moved here from the US.  He looked befuddled at my drivers license, and proceeded to explain in Spanish how to get to Campana.  I didn't understand much of what he was saying but he was cute in that uniform so I didn't mind listening.  It wasn't at all scary since I was not doing anything wrong. 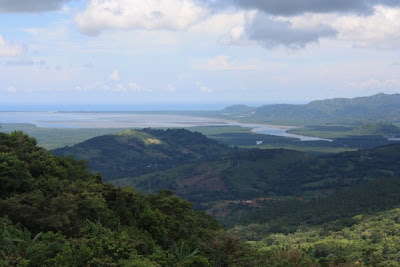 ﻿
Altos de Campana National Park is located very close to where we live, once we figured out where it was.  From the Pan-American Highway in the town of Capira is a sign indicating where to turn off for the park.  This was a shock to us since Panama is not known for street signs let alone signs to much of anything else.  The 5 kilometer drive was steep and winding with some areas of gravel.   Since the drive was slow it was perfect for taking in the breathtaking views along the side of  the road.  The left side of the road was lined with thick rain forest and beautiful schrubs and flowers.  The right side opened to green lush, rolling hills with un-obstructed views of mountains and the Pacific Ocean as a backdrop.  There were some houses, fruit and plant stands and cantinas along the way too.  There is even a hotel close to the trail heads with a restaurant.  It sits on the top of a hill and appears to have a wonderful view of the mountains and ocean.  We stopped at this little information booth to get a map and pay our entry fees of $5.00 each to the park.  Once we have our pensionado visas we will only pay $1.50 each.
We stopped along the way for Clyde to take lots of pictures and we were thankful that we took the chance to move to this beautiful country with such friendly people. 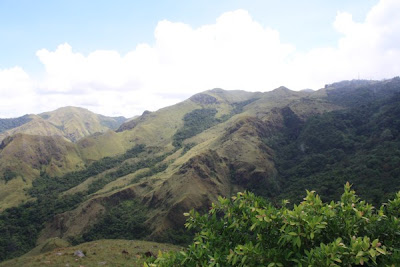 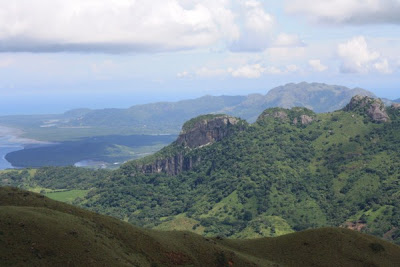 The first part of the park was the Mirador (look out).  This was a raised platform that we climbed up to that allowed spectacular views of not only the Pacific Ocean but of the beautiful green mountains with misty clouds nestled in the tops. 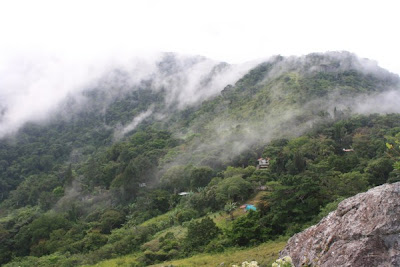 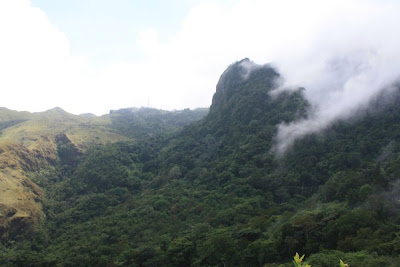 ﻿
Up ahead we found the trail heads although there was no parking lot, just a place to pull off the road a bit.  We found various hiking trails that wind their way up and through very thick, tropical rain forest.  The trails were well marked and easy to follow and the ground was a bit muddy, and rather wet at times and rocky. The trail we picked had a rather steep incline but I enjoy climbing up mountains.   But I never think when I'm enjoying the climb UP that I always have to get back down.  We had a few sprinkles of rain along the way, but the forest canopy was so thick that we stayed dry.  Since we really didn't know how far the trail was we turned around at a certain point since it was getting dark from heavy rain clouds and we didn't want to get caught in a storm.  At the steep parts going down I had my knight in shining armour........my brave husband walk in front of me so I could hang onto him if I slipped on wet pavement. 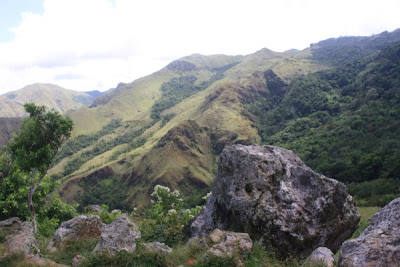 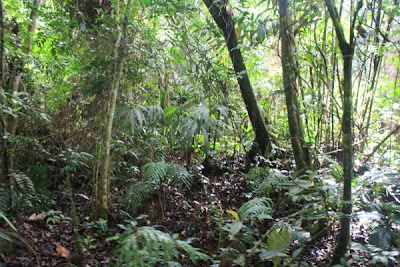 ﻿
Altos de Campana National Park was the first National Park in Panama.  It opened in 1966 and covers 4,925 hectares and the temperatures hover around 24 degrees celcius  (about 75 farenheit) and it gets about 100 inches of rain per year.  It's located on Chame Bay on the Pacific coast.  The park has 39 species of mammals including the black-eared opossum, coati, sloths and Geoffroy's tamarin.  It also has reptiles and amphibians such as the rare Golden Frog, poisonous frogs, geikos, giant lizards, salamanders, snakes, and the giant frog which is the largest amphibians in Panama.  The park is also home many birds, too varied to mention here. 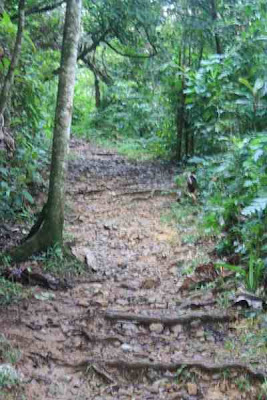 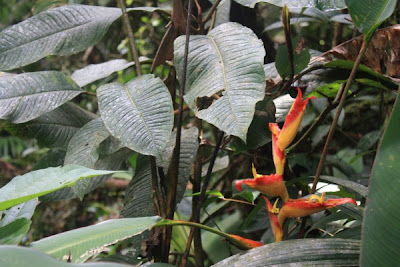 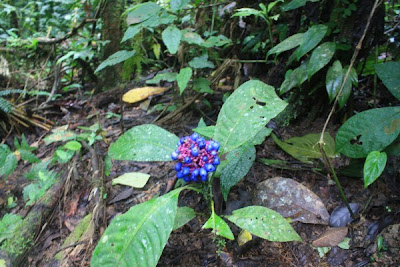 ﻿
After an hour or more of hiking we headed back into Capira to stop at the local mercado for some produce.  We picked up some cheap bananas, avocado, onions and plaintain at a Chinese  mini-super grocery store for $3.00.  Then off to Quesos Chela for some home made jalapeno canasta cheese.  Now back at the casa Clyde is baking plaintain, to go with beans that he cooked in the crock pot yesterday and some left over fried rice from yesterday's trip for Chinese.  Now for a lazy night at home watching free tv on the laptop sitting in lawn chairs.  Our living room furniture is still out on a ship somewhere or maybe in port waiting......not sure.  Never know where tomorrow will take us but one thing is sure, you'll probably hear about here in our gringo tails. 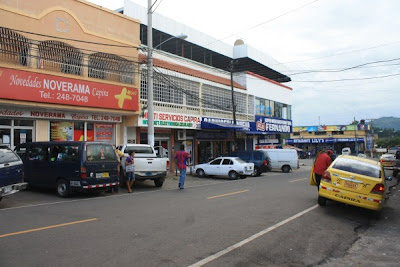 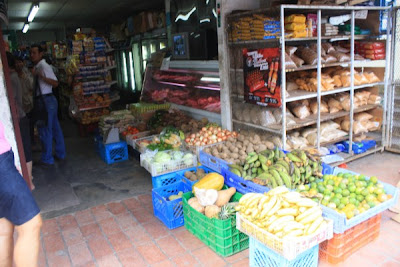