This little town of Capira, Panama that we live in apparently had a birthday this weekend.  I believe the signs said it was 135 years old.  Yesterday while walking around the "mercado" or little shopping area we noticed tents set up with rides for the kids, booths and floats There was loud latin music in the air ALL night long, along with fireworks.  I did manage to get to sleep but every time I woke up I heard music and singing in the distance.  We had been told that Panamanians love to party and dance usually with the help of seco, a vodka like beverage and locally made rums.

Speaking of rum......back in the states we would buy Captain Morgan Rum for about $16.00 a liter.  On our first trip to Panama in the grocery stores we noticed big displays of "Ron Abuelo" but had no idea what it was.  We finally asked someone and they told us that "ron" is the Spanish word for rum and Ron Abuelo is a local Panamanian rum that we just had to try.  A liter of Ron Abuelo here sells for about $6.99 or even less in some stores.

Since our first bottle of Ron Abuelo.....yes we've had a few now......I googled it to discover it's made by a local Panamanian family that actually grows their own sugar cane to make this rum.  The distillery has been in the same family for many generations and apparently there is even a better grade of their rum then the "abuelo" version.  But since we're cheap and living on a fixed income.......as us old folks say.....we'll have to be happy with the $6.99 version. 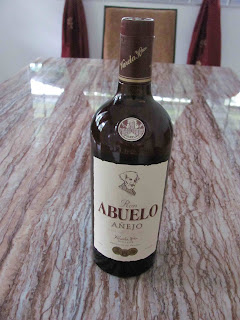 ﻿
By the way......the famous Captain Morgan who's name and likeness is proudly displayed on rum bottles across the US.......he was a real person, a ruthless pirate that destroyed the original Panama City in 1671 in an effort to take over the city and release a stronghold of Spain in the Carribbean.  Needless to say, the do NOT sell that brand of rum in Panama.  But who needs it anyway with much tastier, cheaper versions such as Ron Abuelo.

ALL hard liquor is sold in the supermarkets here and we've even seen them giving samples out on a Friday night in the El Rey Supermarket in Coronado, about 30 minutes from were we live.  They were giving samples of Ron Abuelo, Bacardi and some wines too.

Another tid bit for all of you beer drinkers, a local beer here sells for about 30 cents a can.  They have several such as Balboa and Atlas to name a few. The US imports sell for more but since we are not beer drinkers we really haven't paid much attention.

Yesterday while shopping in the supermarket I noticed all kinds of flavored rums like coconut, strawberry, pineapple and more for only $4.00 a bottle.  Ok I'd better stop talking about booze or you'll all think we've retired and turned into lushes.  We really don't indulge all that often but I find the prices so different from the US that I just thought it was worth mentioning.  But those of you who do plan to visit us when you're here we might just introduce you to our new friend Ron Abuelo.  He might even make your clothes fall off like they say that Jose Cuervo dude does in Texas.
at September 11, 2011