Spanish school was good today unlike yesterday!  Our professora Suzanne is from Argentina and likes to sit and chat in Spanish which is exactly what we all need.  When she see's that she's losing us she starts to use hand and facial gestures to make her point.  She said when she first came to Panama she had trouble with the language since Panamanians drop the last letter of the word and slur words together.  But then she realized that she had to start listening differently, and then she began to understand what they were saying.  So Clyde and I are now trying to listen differently and respond to people here in Spanish.

When leaving the school today we stopped to chat with two other students that were sitting outside.  A woman from Switzerland is married to a Panamanian man and decided that she needed to learn Spanish.  And a gentleman from Ireland who comes to Panama to work for three months at a time decided to learn the language while here this time.  The two of them had been put into the same class since neither knew any Spanish.  We were put in the same class with Kaitlyn since like us she already knew some Spanish and that way the students in each class are on the same level.

We've been staying at El Parador Hotel in the El Cangrejo part of Panama City and walking to school, restaurants and stores.  While walking around the streets I started to insist that we speak only Spanish to each other so we sound more like locals.  It has forced us to practice the language and begin to think in Spanish.

El Cangrejo is one of the nicer parts of the city with tons of restaurants, bars, clubs, hotels, casinos, stores and more.  We hit the casino's hard tonight and spent some big bucks playing penny slots and walked away with some cold hard cash.  A whopping $6.75 to be exact, not counting the winnings that we put back into the slot machines.

This afternoon we went to hang out at the rooftop pool here at the hotel.  I was wearing a pure white bikini on a rather tanned body.  I took my wrap off and walked around the pool area taking in the beautiful Panama metropolitan skyline when I heard a loud whistle.  There was a crew of construction workers at a building a few blocks away. They all started to whistle and yell things in Spanish like "mi amore" or my love.  I really didn't think they were looking at me but Clyde insisted that they were.  I got into the pool and the whistles and yelling stopped.  After a while when I got out to lay in the lounge chair they started yelling and whistling again.  Ok so now I realized that they really were looking at me.  It was a pleasant and funny surprise and we both got a kick out of it.  Eventually they went back to work and then disappeared.  Perhaps their work day was over.  So just because I'm an old retired person now doesn't mean I can't still turn heads! 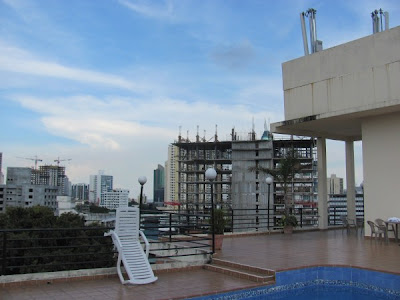 Workman working on this building 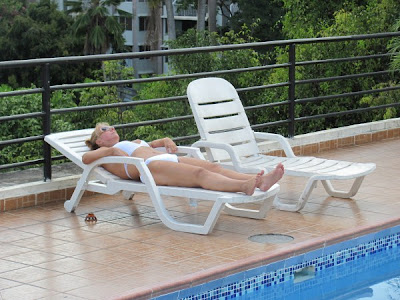 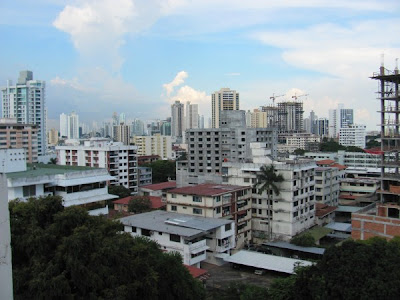 Skyline from the pool 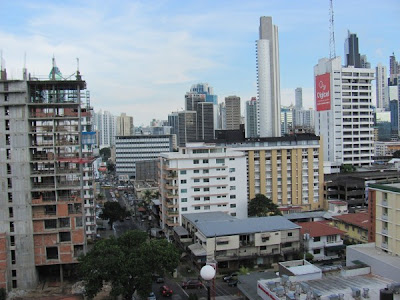