Last night we stopped at a nearby barbeque joint located right off the highway or "autopista" as they say here.  Everytime we drive by this open air restaurant the smells of bbq fill the air as smoke surronds the vehicles parked outside.  As we walked from the car latin music pulsated through our heads as the wonderful smells filled our nostrils.  We asked for a menu and the waitress pointed out the "picks of the night" on it,  which was a selection of about 6-10 items.  We choose pollo or chicken for whopping $3.00 a meal. 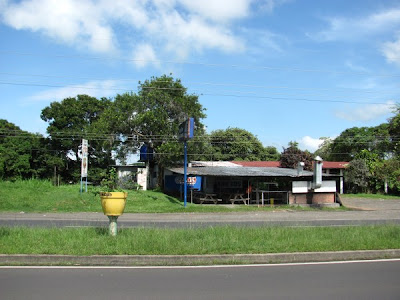 ﻿
The balmy night breeze blew gently through the place as we sat on old wooden picnic tables taking in the views.  There were tables of friends sharing a meal and sipping on Balboa beers, probably for a mere 30-50 cents each.  The place was dark and lit only by strings of little lights and the glow of flatscreen tv's.  On the tv's were videos of bullriding or music videos that coordinated with the sounds on the jukebox.  This looked as though it would be a great little place to dance and I wanted to get up and start swaying to the salsa and carribbean beats, but I refrained.  Had I expressed this thought to Clyde I'm absolutely sure that he would have initiated the dancing, because he has done that before. We've danced in parking lots, in the middle of streets, poolside, at campgrounds, etc.....ok so you get the idea.

We waited anxiously for the food to arrive since the only thing we were sure that we were getting was chicken.  We had no idea what would be with it, and since this IS Panama it's always an adventure.  One time we ordered a corvina fish meal at the mall and it arrived with a tail, head and eyeball looking at me.  After that we made a mental note to ourselves that when the menu says "entero" that means you're getting the whole fish.

This picture "borrowed" off of the internet
ours were grilled with cheese in them
﻿
The waitress brought our meals in a plastic basket and we looked down to see a bunch of succulent, barbequed chicken atop a thick corn tortilla.  The tortilla was thick, about 6 inches round, cut into quarters and filled with cheese and grilled.  We soon concluded that this must be Panama's version of a grilled cheese sandwich.  At least that was the reference that our little American brains came up with at that moment.

These thick corn tortilla like things are called arepas and originated from Columbia where much of Panamanian cuisine was influenced .  They are made from unleavened cornmeal and are either topped or filled with cheese, meats or vegetables and either fried, grilled or baked.  The one hidden under our chicken was gooey and tasty, but probably not too healthy. 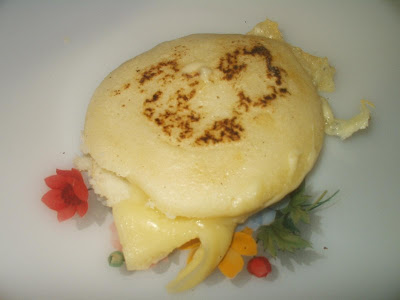 Another "Borrowed" Picture
﻿
After that we headed home for a night of nothing to watch on tv just like when we lived in the US.  Today we're taking it easy at home then later on off to a potluck dinner to make some new ex-pat friends.  And tomorrow morning we begin our month long Spanish lessons in the city.  Life is about to get even busier for us crazy retirees living near the jungles of Panama.  As they say here "ciao" or "adios" until next time we meet along the gringo trail.
at September 25, 2011