For all you gringos, that mean's "welcome to Panama."  We have arrived and have been welcomed with open arms, everything has gone wonderful, we're all settled in now......ok so not really.  Let's go back to Texas and start at the beginning.

We drove to San Antonio, TX and spent the night in a hotel near the airport.  On the way we stopped at Wal-Mart and bought a scale to weigh our luggage.  We were each allowed to take 2 pieces of luggage free of charge as long as they weighed under 50 pounds, plus a carry on for each of us.  IF any bag weighed more than 50 pounds we would be charged $200 PER bag.  The first bag weighed 65 pounds, the second 55, the third and forth also way over.  What to do?  Clyde said "you can buy alot of clothes for $800 so we need to get rid of some stuff. "  So we started pulling out clothes, shoes and other stuff and said good bye to it all.  The hotel maid that morning must have been thrilled to find bags of clothing, a full box of wine and a cooler of snacks that we had planned to abandon.

The next morning we had to wake up at 2:30 am to get to the airport since our flight left at 5:45.  We got to the airport, Clyde dropped me off with all our baggage at the door and went to return the rental car.  Thirty minutes later he called me to say that there were no signs but he finally found the place way off the airport property.  He an everyone else there were grumbling about the absence of signs.  Good thing we had lots of time since this setback took nearly an hour before he got back to me at the airport.

The flight from San Antonio to Houston went off without a hitch.  After a 2 hour layover we boarded the international flight for Panama, our new home.  The pilot announced that due to a storm out in the Gulf of Mexico the plane was being re-routed to go around it.  We waited in the plane for about 35 minutes before taking off.

Since we left Houston late we arrived in Panama City about 40 minutes late.  We rented a car there and everything went well.  Our plan was to meet up with Betsy our new land lady at 2:30 in the Multi Plaza Mall in the city. She would help us get cable and internet connected.  We drove around the city for over an hour lost unable to find the mall.  (Did I mention that Panama does not believe in street signs?)  Our US cell phones couldn't make international calls so we had no way to call her to tell her what was going on.  Panama City traffic is like Mexico City times two.  We finally found the mall, fought for a parking space and made our way in.  Now we just had to find Cable Onda, the store we would meet Betsy at.  This mall is huge with many levels so finding the store took a while too.

Finally we found Cable Onda but didn't see anyone that looked like Betsy, since we had seen pictures.  Clyde went in and as soon as he mentioned her name to the man in the store, he said she was there and went to get a drink and would be back.  We were SO greatful that Betsy was patient enough to wait for us!  Betsy was as sweet as her e-mails.  She had brought her daughter Maria-Beatriz with her also.  The daughter is seven years old  and with a smile showing her missing front teeth, she handed Clyde his "Panama Birthday Present" a painted picture. 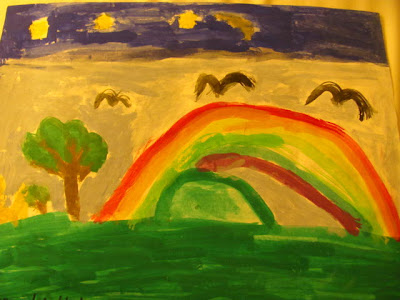 ﻿
Since Betsy speaks Spanish the cable internet hookup went fine. Then she helped us to find a phone kiosk that would sell us pre paid simms cards for our US cell phones, but no one had these. We gave up since it was getting late and she still had to take us to the house that we would be renting from her.

We followed Betsy closely for the 40 minute drive from Panama City to Capira. The scenery was beautiful, all green and tropical looking. We drove through mountains and past little villages with rows of houses.  Each house had clothes drying in the warm breeze.   Along the side of the road we saw people walking, riding bikes and then..... a naked lady? YES it really was a naked lady?  Why?  We didn't know and probably never will.

Once we reached the little village of Capira we turned into a small development called "Residential del Oeste."  The sounds of loud, latin music permeated the little street from the first house.  We continued on past other brightly colored homes some with people sitting out or lying in hammocks.  Suddenly Clyde turned to me and said "oh my....what have we gotten ourselves into?"  I asked "why, what, you wanted to live among the people and here we will be."  "Is this not what you thought it would be, " I asked him. I think at this point we were both in major culture shock! This was NO longer vacation but THIS is where we now lived....period!

We pulled upto a bright purple house and stopped.  Betsy opened up the house and it was just as charming as we thought it would be.  Clean, bright white tile floors and walls.......pretty flowers in the garden.  Clyde was much happier once he saw the house.  Betsy chatted a while longer answering questions and giving us some suggestions.  She has moved in and out of countries and understands what we are going through.  She has been a tremendous help through all of this anas bed we can't thank her enough.  She has become our first Panamanian friend who we will cherish for life.

Since there is no electric in the house yet and we have no furniture we decided to head to a hotel for the evening.  We drove about 30 minutes to Coronado and stayed in a hotel we'd used last January while here on vacation.  While booking the room Clyde had to show his passport, a common practice when in a foreign country.  Before getting settled in for the night we decided to go next door to El Rey, a big supermarket for some snacks since we hadn't eaten dinner.  Later that night he realized that he didn't have his passport.  He went down to the desk to look, to the car, to the grocery store but it was no where to be found.  At that point we both started to freak out.  The culture shock hit us hard.  Here we were with NO connections to the outside world.  No cell phones, NO internet, he had NO passport we had NO furniture.....NO stuff, we know NO ONE other than Betsy.  I began to cry and yell at him.  Why did we do this?  How is this all going to play out?  What will happen to us?

Fast forward to the next day.  We woke up, the sun was shining, it was the usual 75-80 degrees with a gentle breeze, we found an internet cafe and for 50 cents we were able to get online.  We checked a few more places for cell phone simm cards but our phones were locked.  With the language barrier no one could help us.  We gave up and decided to get new cell phones with pre-paid cards and get rid of the old phones.  At Movi Star we found Luis Enrique who spoke a little English and was able to help us.  For $16.95 each for a phone plus the price of a pre-paid card we walked away with new cell phones.  We were now connected to something.  Clyde immediately called Betsy to let her know since he'd given her phone number to a few people just in case they found his passport.  We got one thing accomplished in Panama.  Things looked a little bit better.  Just maybe we could make this work.  After all today is Monday and we DO NOT have to go to work!  Yes, life will be good living in Panama.
at September 05, 2011