Our Clothes Are Falling Off and more....

One of my biggest concerns about moving to Panama was not being able to work out for 2 hours a day in a gym and gaining weight.  We did ship some free weights and a bowflex machine and I even bought the P-90X program.  I can do all of that at home WHEN they get here.  It's what to do in the meantime that worried me.  Most of you know that Clyde and I both have had weight loss surgery.  My gastric bypass was over 7 years ago and his lap band was over 3 years ago.  We both decided that after moving we would eat fresh fruits and vegetables and lots of fresh fish and chicken.  We also decided to stop using artificial sweetners.  We thought if we need something sweetened we'd just use a little sugar.  We even starting drinking iced tea straight up, meaning no sugar and no sweet and low.

Back in the states we both got into eating lots of convenience foods like Lean Cuisine Entrees, packaged protein bars and shakes, packaged cheese products, yogurts and much more.  Although we knew they were loaded with tons of salt, it was quick and easy while living our crazy, busy lives.

We moved to Panama to retire on less money and live cheaply.  This process includes buying cheap fruits and veggies from local stand on the side of the road and cooking fish and chicken at home.  To our amazement we both noticed that our pants are falling off.  Ok so I'll admit that we have splurged on some locals rums and the occasional cinnamon roll from Cinnabon in the mall. And other than walking we have not done any other type of exercise, yet our clothes are literally off.  It finally occured to me that we're not eating any processed foods.  Nothing that comes out of box or package, which means nothing that's loaded with sodium to bloat us.  I have been amazed at how wonderful I feel.  Not bloated and my rings are even spinning around on my fingers.  I had always wanted to lose the processed foods but just didn't know how to do that when working full time and working out for 2 hours a day.

I've had a cold the past few days with sinus congestion, cough, and can barely speak.  Since my US stock of cold meds is getting low we decided to stop in a pharmacy and see what we could get here.  The last meds I purchased in the US have pseudoephedrine in them and we showed the package to the pharmacist here to see if they had anything similar.  We were told that pseudoephedrine in Pamana is only available with a prescription.  Interesting we thought, since we had heard that most everything that requires a prescription in the US is available without one here.  And a prescription is not needed for Sudafed in the US but they do keep it behind the counter, in Texas anyway. So we asked for something else for congestion and the female pharmacist presented us with a little box.  On the box was a price tag of 69 cents for a total of 12 pills. Wow, I thought it's so cheap that's great.  Apparently 69 cents was per dose so the total for the package was over $8.00.  No wonder the pharmacist kept saying "doce" to us.....I didn't know why she kept telling us there were 12 doses in the package.  That's why.....because she was going to charge us for that many doses.  Ok so cold meds are not too cheap in Panama but they're not in the US either.  And maybe she "gringoed" us and sold us something high priced.  Maybe there is cheaper stuff here. 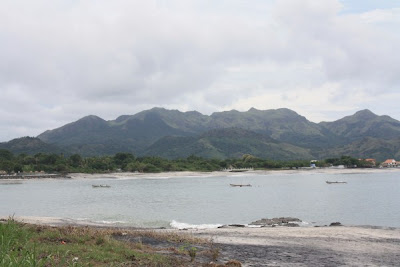 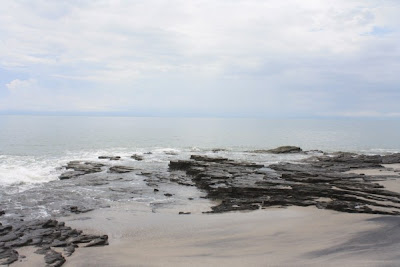 Volcanic Rock on Beach in Gorgona 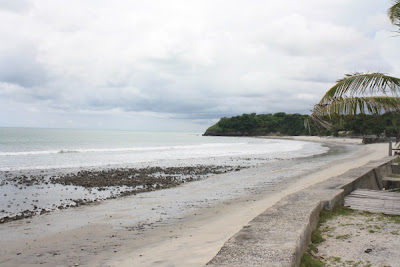 Beach view in San Carlos
We have been out beach hopping again today before the rains came down hard.  We found a few beaches on the other side of Coronado which would be about 45 minutes by car from here.  The guy at the Toyota dealership told us about a few places that are "all inclusive."  This made no sense to us since we didn't want to go to a resort, just go for a day to use the beach.  But we did stumble onto one place called Club de Playa San Carlos.  The prices were listed outside and it said "incluyde".......for adults it was $25.00 and is apparently cheaper during the week.
What is included in a Day Pass?
so that might be something that we check out one of these days after the rainy season has gone by.  They do have a website if anyone wants to check it out further.

Clyde is on several internet boards one of which is Americans In Panama.  We've followed the boards for a while now but recently decided to put out a post.  To our surprise there is a decent size number of ex-pats (people that move out of their home country to live in another country) in this area.  There are some living right here in Capira as well as La Chorrera and the surronding little towns.  They have get togethers once a month or so.  We've already been invited to a potluck on Sunday in La Chorrera.   So it will be nice to meet other crazy people like ourselves that moved their lives to Panama and live among the locals just like we do.

We just received an email from the movers.  It says that our stuff should arrive in the port of Panama around October 6th, but that is just in the port.  We have no idea how long it will take for us to get the stuff after that.  That involves immigration actually coming to the house and going through the stuff to be sure that we are not smuggling in drugs or anything else bad I suppose.

I was bored earlier today and started typing some ramblings about our life here.  I had planned to come back to it later on and make it better instead of a mish-mash that perhaps only me, the writer would understand.  In the mean time Clyde hit "publish" and off it went.   So maybe next time things will be better.  After all I am a Virgo and we are perfectionists!  When Clyde first suggested that I start a blog I was concerned about how it would be perceived by everyone.  Thankfully everyone seems to be enjoying it and I do enjoy creating it.  Maybe tomorrow will bring something more interesting......
at September 20, 2011