Fishy Story From a Friend.....

A chance meeting occurred at the driver's license office a while back, when we noticed another gringo.  Since he was as friendly as Clyde, the two got to talking and we found out Daniel lives only fifteen minutes from our house.  Another U.S. expat, Daniel retired to Panama six years ago from New Mexico.   We saw each other at the gym today and he told us about yesterday's fishing trip and asked if I'd put a picture in the blog.  Daniel emailed us not only pictures of his gigantic catch, but a story to go with it.
So here's Daniel's fishy story of the one that didn't get away.
Yesterday, I went Peacock Bass fishing at Lake Gatun with two friends. We wanted to get an early start, thinking our luck would be better than last time if we started out earlier, so we hit the water about 7:00 a.m. At about 9:30 I was feeling like I had wasted two hours of sleep getting up so early to travel the hour from my house to Arenosa, but didn't overtly complain. We had caught a couple of Peacocks, but they were small and few and far between.
One of my partners Doug, was having a hard time catching the minnows in his bucket to re bait his hook.  I could not hold on to them, and lost about a dozen of them into the bilge at the bottom of the boat.  Not a good day for either of us so far. There was only one of the other local boats out, and they changed positions a lot, so they didn't seem to be faring any better than we were.
Then about 10:00 a.m we decided to relax our focus and put on some Reggae music on the CD player. Although I'm not an avid fisherman, I do think that I remember other, older fisherman, saying it's best to be quiet in the boat so as to not scare the fish away. Nonetheless, I got myself in the right frame of mind, and said "I can feel them...they are here".  The two other guys laughed at me, thinking I was psychotic or suffering some similar mental derangement, but I could feel them.  About another hour had passed, but who really looks at their watch when they're fishing anyway.  I had gotten my line tangled with about 100 meters out, which I had to wind onto my hand before I could remove all the snarls, and rewind the line onto the reel.  I told you already, I'm not a world class fisherman!
I finally let all the line out of my hand-wind and began reeling it in. But 1/3 of the way through the rewind, I had a strong tug on my line which felt like I had snagged one of the many trees that are still standing, or fallen to the bottom in Lake Gatun. It's been about 100 years since the lake was flooded to make the Panama Canal passage, and that's some damned hard wood.
Captain Benji dutifully reversed all engines so that I could rewind as much line as possible before we either had to cut the line, or if it was shallow, our loyal Captain could dive into the water and retrieve the line and tackle intact. We got to the very deep spot where the line went vertical, meaning the snag was directly below us, but as I tried once again to disengage the hook, the line moved a bit, and I reeled it in a bit. Then the line began changing locations, so I knew I had a fish on the tackle, but he was an able opponent. As I began reeling him in, I noticed he had a big globular male crown.  As the excitement mounted Captain Benji coached me on how to continue bringing him in. I asked him for the catch net, because the way he felt on the line, I was afraid he might break the line when we finally hauled him out of the water. He put up a good fight, but I finally got him to the surface. He was very big, for a Peacock... about 18 inches or so, five to six pounds, and Captain Benji exclaimed "Holy Macaroni" in his unique Romanian style. We were laughing so hard because we could hardly believe that I had hooked such a great fish despite the line snarl. But, I had to remind them, "I told you I could feel them". 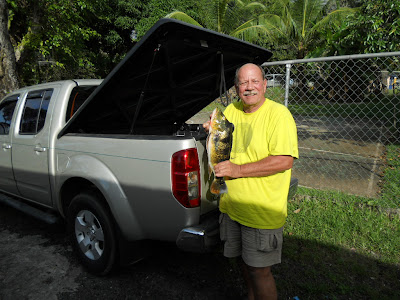 Our Buddy Daniel with his huge
"Peacock Bass" 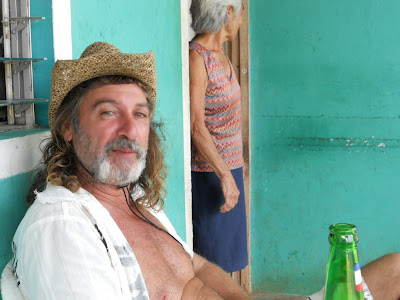 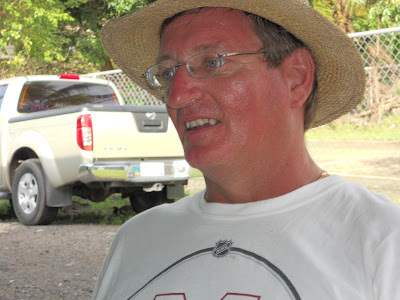 Daniel's two fishing Buddies
(This narrative was inspired by my friend, Terry Coles, who very capably writes a blog Along the Gringo Trail, a journal of two former Texans who have courageously taken the gamble to become expats in Panama)
at December 07, 2011