Our day today began with a drive into Panamá City to have a physical for health insurance.  If you remember this was scheduled a few weeks ago but cancelled when the doctor was called away on an emergency.  I was called in first by a black women in scrubs who I later learned was a technological assistant.  The first thing I said to her is "yo aprendiendo espanol." which means "I am learning Spanish."  She responded with "yo aprendiendo ingles."  After that we laughed and managed to understand each other throughout the whole process.  She took my height and weight, measured my body with a tape measure, had me take off my shirt and bra and lie down where she put the leads on for the EKG.  In the meantime she left the room a few times, each time leaving the door a bit open while I was lying there topless.  At one time the doctor even came in and when he realized she wasn't finished prepping me, he left again.  After she got done applying all the leads to my body, she helped me close the paper gown to hide my bare chest, and she strapped a belt around my waist to hold the leads in place. She then instructed me to step onto the treadmill and wait there for the doctor.

It seemed like forever but eventually the door opened and in walked a "gringo-looking" balding gentleman in a white lab coat who I assumed was the doctor.  He said "hello" and shook my hand.  He spoke fluent English and we chatted as he started the treadmill.  The typical medical questions were asked as he charted what I was saying.  He explained how the stress test on the treadmill would work and I walked as I kept talking to him.  After a few minutes he asked where we moved from and I told him Texas.  He asked "what part," and when I said Corpus Christi he explained that he used to practice medicine in San Antonio and would go to Corpus Christi often with his family.  What a small world that here I am in a different country, in some unknown clinic and the doctor is from San Antonio, TX.

I had to ask him "so how different is it being a doctor here in Panamá compared to being a doctor in the U.S.?  He said "oh, it's soooo different."  He went on to say that he was so sick of filling out piles of paperwork just to get paid.  Also the high price of malpractice insurance in the U.S., the insurance companies and so much more.  Here in Panamá he's free to take care of patients which is why he became a doctor in the first place.  I asked if he carries malpractice insurance here and he said "no, I don't need it."  Then I asked if someone could sue him here and he said "yes, but they won't get too far."

Later on when I talked to Clyde about the whole experience, he seemed to think that the doctor is Panamanian.  His name is Dr. Jorge Paz Rodriguez so he might be right.  We have discovered that the more educated Panamanians tend to speak fluent English.  The cost of each physical with the stress test was $140 for each of us which turned out to be a whole lot less than we had expected.

No trip to Panamá City would be complete without some shopping before heading home. On the way home we stopped by the Pedro Miguel Locks, to watch a few ships transit the canal.  This set of locks runs parallel to the road which makes it easy to pull off the road and play tourist for a while watching the ships go by.  The more famous set of locks is the Miraflores Locks which are only visible after paying a small entry fee and going through a visitor center. 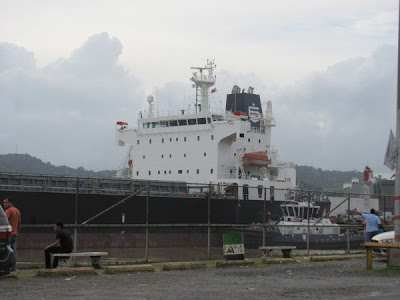 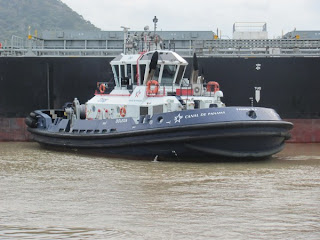 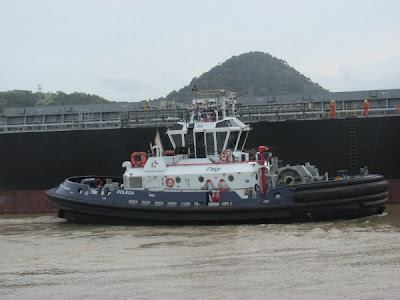 Final stop was to fill our bellies at our favorite "parrillada" or barbeque place called Los Arrieros.  The waitresses seem to know us now since they don't bring us menu's.  We ordered our usual fare of pork and chicken which come with an "arepa" for $3.00 each meal.  An areapa is a thick, corn tortilla sliced and filled with white cheese, then grilled to perfection.  We topped the meal off with a "batido" or milk shake made with fresh pineapple, milk and who knows what else.

Now that we're in the dry season, the days seem to be getting warmer but breezy.  The nights cool down nicely so much that we tried to keep the windows open but heard dogs barking and our neighbors baby crying, so we decided to close them and put on the air conditioner.

Here in Panamá the crescent shape of the moon is like a smile instead of like a letter "C" and I have no idea WHY?  I would have never noticed this except some friends pointed this out to us recently.  I did some online research but the pictures always come up "C" like instead of the crescent being on the bottom or top.  I'm sure somebody out there will know and tell me why.  Until then I'll keep wondering why which will probably lead me into trouble.... along the gringo trail.
at December 28, 2011