Partying with the Gringos......

Yesterday after our morning workout and swim, I put on my red Christmas halter top with a skirt and we headed to Gorgona for an early Expat Christmas party.  The event was held at La Ruina, a restaurant owned by an American married to a Panamanian wife.  Since the restaurant was a mere pile of ruins when he made the purchase, they named it La Ruina which means "the ruins" in Spanish.  As the story goes there was a young soldier from Atlantic City, NJ that came to Panama and stumbled onto a pile of ruins in the heart of Gorgona.  He had a dream to turn the ruin into a restaurant and pub where friends could meet for good food and a beer.  And after falling in love with the country and a native woman, he decided to call this place home. They have been married for thirty one years. 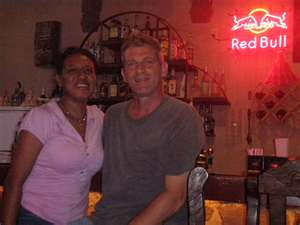 the owner Frank and his wife ﻿Dilcia
The first course was salad with raspberry vinaigrette and bread.   A huge platter held the entree of turkey, ham, mashed potatoes, gravy, cranberry sauce and dressing.  And for dessert a local favorite of fruit cake drizzled with a sweet glaze was delightful.  In the U.S. fruitcake has been a long time joke present given for the holidays, said to be used as a door stop and rarely eaten.  In Panama "torta de frutas" or fruit cake is a common dessert baked fresh and similar to U.S. version of banana bread, but with candied fruit instead of fresh.  Frank the owner of  the restaurant and his wife Dilcia trained their staff to serve up a great meal is a nice atmosphere.

As with most of these expat luncheons, by the time we said our good byes to friends it was time for dinner.  On the way home we stopped by a friends house to pick up some home-made bug killer.  He claims that a mixture of Borax combined with water and honey put out for the bugs to take back to their den, will eliminate the critters.  I'm skeptical since I don't want to have the suckers over for dinner, just make them go away NOW.  Other than these itsy-bitsy "crazy ants" as Clyde calls them, bugs have not been an issue in Panama.

Back at the casa we munched on some left-overs for dinner before relaxing on the couch for a night of nothing on t.v.  Always nice to spend time with old friends and make some new ones too.  Just another perfect day in paradise, here in our new life in Panama, along the gringo trail.
at December 10, 2011