Holiday baking is no piece of cake here in Panama!  We're having some expat friends over to the house for Christmas Eve, and since I love carrot cake but don't allow myself the caloric splurge too often, I thought I'd make one for our get-together.  Off to the store we went with a list of supplies needed, most of which we'd seen here before but a few odd ones.  We had never seen baking powder and finally found it in the baking aisle on the bottom shelf in tiny packets that looked like yeast.  I also needed powdered sugar and thought I'd seen it here before, but where?  It wasn't with the brown sugar which is in the baking aisle.  Could it be with the regular sugar?  No, not there either.  Clyde called a friend to find out how to say "powdered" in Spanish.  Once armed with the phrase "polvo azucar" we asked around but the store clerks just looked at us confused.  We left one store and tried another since I thought I'd seen it there.  We asked around and after running around the store like mice in a maze, we found it in the baking aisle in bags on the bottom shelf.  They do sell "torta de zanahorria" or carrot cake here, but it's not the high sugar, high fat American version that we've come to love.  It's more like a coffee cake with carrots that they make here in Panama. 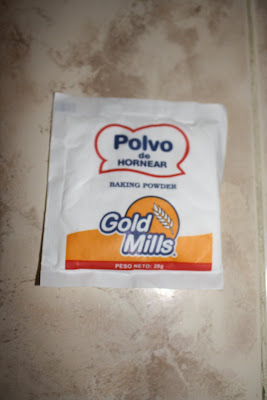 This Baking Powder was
found on the Bottom Shelf in trays 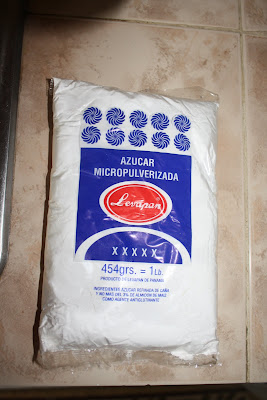 This is Powdered Sugar
Some of our neighbors have decked the streets with PVC pipe bent in a curve from side to side to form a tunnel.  Then they wrapped red ribbon around the red pipe and strung lights on them for a nice touch.  In the town of La Chorrera we saw a much more elaborate version of this that went on for many blocks.  Panama City is loaded with larger than life nativity scenes and Christmas trees with cantaloupe size balls and wide mesh garland.  And one of the malls even put in an ice skating rink to add to the "wintry" feel. 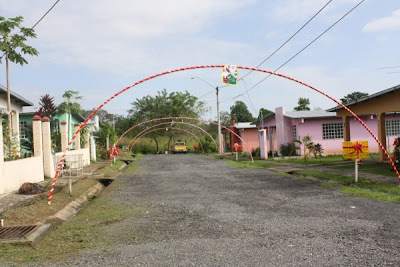 The Street Next to us
with the decorated PVC arches
One major difference in Panama compared to the U.S. is that this time of year in the U.S. the holiday candy practically jumps into your cart as you walk by.  Huge displays scream out.....eat me, eat me, you know you want it!  And being faithful Americans try as we may not, last year we too fell victim and gorged ourselves on chocolates wrapped in pretty red, green, gold and silver wrappers until we passed out from the sugar crash.  Here in Panama we noticed only a small display of holiday chocolates high priced at over $4.00 per bag.  And as I was unpacking the groceries at home I noticed a few bags had apparently jumped into my cart.  Perhaps it was the elves or my husband that snuck them in among our groceries, or maybe even me.  Ok so I admit that Christmas reminds me of my childhood in New Jersey. And growing up chocolate was part of the holidays, and the holidays were a happy time so chocolate is associated with happiness. 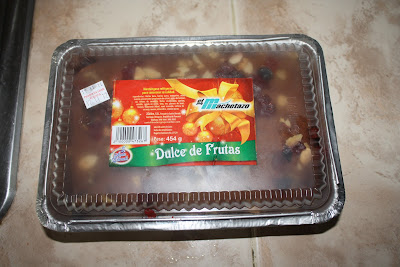 Panamanian Fruit Cake
VERY POPULAR!
Also in the U.S. this time of year are large displays of items for baking.  Baking dishes, nuts, cake mixes, cookie cutters, sugar and more.  Along with displays of pre-made cookies in brightly colored tins.  No such thing here in Panama.  I've seen small displays of packaged cookies which did not look tempting at all. But there are large displays of fruit cake here which is freshly made and not the "hard brick" like fruit cake found in the states.  Also displays of "Pan de Navidad" or Christmas bread which is braided bread formed into a wreath.

It seems that the holidays here are more about spending time with family and friends and less about going into debt buying expensive presents.  In fact there are no displays of gifty items here like in the states either.  It was even hard to find gift bags, wrapping paper, bows or any other stuff like that.  We did see signs on kids bikes that had been reduced 30% so the gift giving must be more for the kids, which is should be.  In Spanish it's "Papa Noel" instead of Santa Claus that delivers the toys.  There are no chimneys to slide down so he must use the front door.

To help the locals have a bit more money for the holidays, workers in Panama receive a 13th month of pay.  Their monthly salary is divided into three and paid out at three separate times of the year, the last being before Christmas.  Panamanians make very little money as compared to us Americans and don't carry credit cards so this extra money helps buy presents for the little ones.  Despite the little bit of money workers here receive, the labor laws grant each worker 4 weeks of vacation each year.  Other than then firefighters, I don't know anyone in the U.S. that has that much paid vacation time.

So later this week I'll be doing some holiday baking after I find a conversion chart to change 350 degrees from Fahrenheit to Celsius.  And the recipe I found is for a "healthier" version of carrot cake which simply means a bit less sugar and smaller servings.

But since Christmas is meant to be in winter not summer it's hard to get into the Christmas spirit in this balmy, humid environment.  There is a slight coolness in the air today as the early morning temperatures are a mere 74 degrees.  Despite my complaining I'll take warm and humid over cold and snowy any day.  Maybe I should go find my Christmas bikini and head out to the beach to make some new holiday memories here.... along the gringo trail.
at December 20, 2011