Why does the moon in Panamá look like a smiley face instead of the letter "C" or a backwards letter "C" here in Panamá?  Apparently it has something to do with the location of Panamá in the universe.  But when I looked up online the phases of the moon, the list showed different locations throughout the world, but they were all letter "C" and not the smiley face.  Does the moon only look different here in this tiny, "S" shaped country of Panamá?  Maybe someone out there will have an explanation! 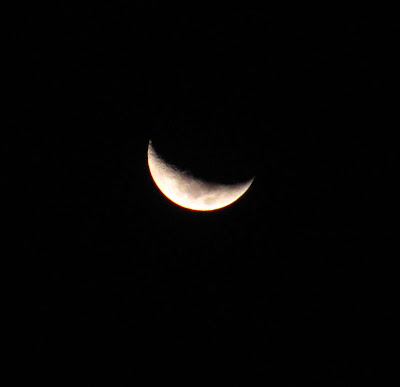 Yesterday we said good-bye to our first Christmas on the isthmus.  The tree came down, the ornaments were packed away until next near as the house was filled with glitter, fake pine needles and garland.  And since we had to rearrange the living room furniture for our Christmas party, we put the room back in order too.  Then it was time to clean whatever mess was left behind and redecorate the living-dining room area.

Clyde has been on the lookout for a gas grill with a side burner, to be able to cook fish outside to avoid smelling up the house.  We share the same attitude of whatever we want we want "now."  But he took his time in this case looking for the best deal and finally bought one.  We used our gas grill in Texas a lot since it's a healthier way to cook and doesn't cause a mess in the kitchen.  Even I was willing to cook once in a while, as I pressed the button and threw a few pieces of chicken on the "barbie."  But I have been known to cook chicken until it's crispy and black being impatient and wanting it done "now."

Last night after dinner we were in the mood for some ice cream and decided to take a ride into La Chorrera.  We knew we could stop at Dairy Queen and pay American high prices for a sundae or blizzard, but thought we'd look for some Panamanian priced "helado" which is ice cream.  A tiny place called "Pizza Express" had a sign outside so we stopped in to see what they had.  For only $2.00 we were able to purchase a sunday in a waffle bowl.  A smaller version in Dairy Queen in the US anyway would cost about $5.00 since they charge extra for nuts, whipped cream, topping etc.... 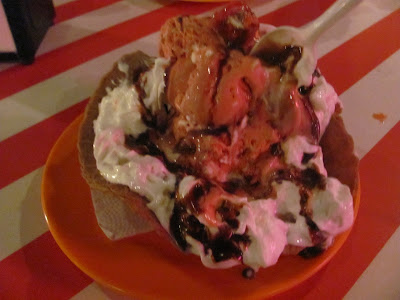 Today we need to hit the gym, clean up our act, get back into eating fruits, veggies and lean meats, and getting out of the "holiday spirit" which means we can eat anything.  Although we'll probably end up somewhere for New Years Eve tomorrow night where I'm sure we'll partake in a few drinks.

The weather is perfect again with temperatures in the low 80's so far. As the day goes on the breeze picks up cooling it off a bit. We feel like we're back along the Texas coast since it's been so breezy here lately.  It makes the evenings a pleasure as we hear everyone in the US complaining about cold fronts and snow this time of year.  It's easy to forget that this is winter in parts of the world.  Yet here in Panamá it's the beginning of summer which means the temperatures stay about the same but the rains will be few and far between.  For us that means it's time to head out for fun in the sun to explore new places, meet new people and get into into trouble.... along the gringo trail.
at December 30, 2011