Here in Panama we have these square boxes perched on a stick to use as a trash receptacle in front of every house.  Some of our neighbors have decorated theirs for Christmas so we thought we'd do the same.  Yesterday as we headed out front with wrapping paper, ribbon, scissors, a stapler and tape a woman walked by headed over to our neighbors house.  We used the typical greeting of "buenas" and she stopped a minute to chat.  She began to tell us that our neighbor had a baby boy and she was left in charge of feeding the dog until the new parents arrive home from the hospital.  By the end of the conversation this woman, who lives on the next street over and has her house up for sale, was trying to sell us her house.  Apparently she's had trouble finding health insurance here in Panama since both she and her husband have pre-existing conditions.  So she's selling her house and moving back to the U.S. since she previously lived in Tampa, Florida where she thinks she can qualify for insurance.  We tried to tell her that the U.S. is very expensive and that's why we moved here, but she has it in her mind that "the grass will be greener"......somewhere else. 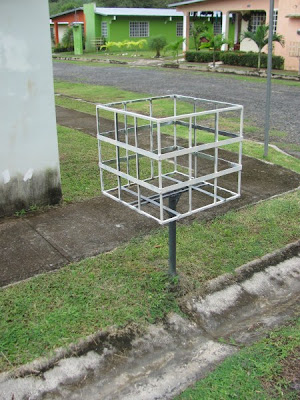 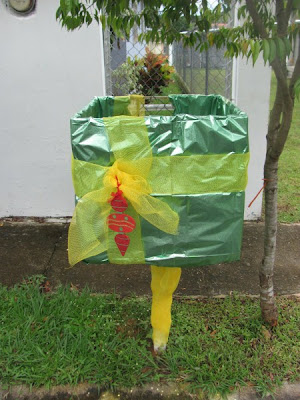 Our "Fancy Ass"
Navidad Trash Receptacle
Taking this an an opportunity to be "neighborly" we took off last night to find a gift for Lidia our neighbor who just had a baby boy.  I was in search of one of those big, tacky lawn signs that announce "It's A Boy" to the world but we only found the "girl" version.  We had to settle for a large banner that exclaims the same and then had to find a way to hang it up.  Since Lidia and husband Christian both work and he goes to school at night, they're rarely at home.  He started putting a fence around their house but never finished it.  So last night around 9pm, Clyde and I were trying to attach this sign to cement fence posts using heavy string in front of our neighbors house.  Their dog watched intently and didn't seem to care that we were there.  I think he was just happy to have some company since he'd been left alone and cries a lot. 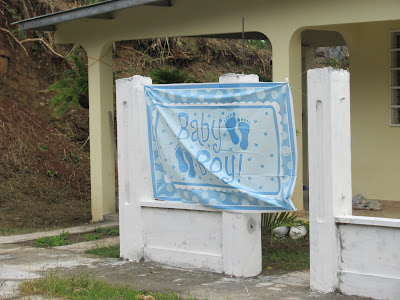 Es un Niño Nuevo!
We greeted our neighbors Christian and Lidia upon returning home from the hospital today with the new baby.  The proud dad is beaming from ear to ear as he shows off his new son to the world. Lidia the new Mommy is wearing a towel on her head, to keep her warm after giving birth to protect her from developing paralysis, arthritis or any other deformity.  If you remember my blog on Panamanian oddities where I discussed this, and now we have proof.  When I saw the towel I refrained from giving a hug to the new Mom, since the towel indicates she was not allowed to shower yet, and felt that a exuberant "Felicitaciones" was enough along with a few gifts.

As we made our way back home we bumped into the lady from the yellow house on the next street who we'd talked to last night.  She and her husband were going to visit our neighbors with the new baby.  We began to explain to him  that our Spanish is not good since we are still learning, and found out that this couple lived and worked in Tampa, FL for 20 years and the husband never bothered to learn English.  Yet here we are in their country struggling to learn the language, which always gets us much respect from the locals.

I recently read a quote that said, "parents ruin the first half of our lives, and kids ruin the second."  Whether we buy into that saying or not, we all know that kids are many things to a parent, both good and bad.  We all remember that first day when we brought them home from the hospital, how helpless we felt with this little miracle in our arms.  As the years go on they manage to delight and disappoint us along the way, and we rejoice when they have children of their own.  For it is only then that we are able to snicker when our darling grandchildren do to our kids, what they did to us. 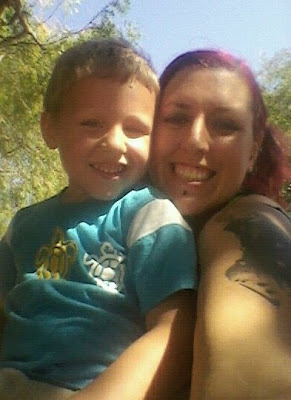 Vash and his Mama, Desiree
On a recent phone conversation to my daughter Desiree she told me a cute story about my grandson Vash.  He's a bit of a clean freak and is now obsessed with brushing his teeth because his grandfather who wears false teeth told him if he doesn't, his teeth will fall out.  His grandfather takes out his dentures to show Vash that he has no teeth when they visit.  Poor Vash saw a little girl who was missing a few front teeth and ran crying to mama that she lost her teeth because she didn't brush them. I can only imagine when Vash starts to lose his "baby teeth" and thinks it's a lack of proper dental care on his part.  And yes Desiree will have to deal with this, and later pay for visits to the psychologist as he develops emotional hang-ups over brushing his teeth.  Ahh the trials and tribulations of raising kids comes to mind again as if it were just yesterday.  But now we remember then from afar since our lives have taken us to this foreign land of of many fish called Panama, where we plod.... along the gringo trail.
at December 11, 2011