Made the Big Screen Tonight.....

We'll it wasn't really us that made the big screen, but the country of Panama.  On tonight's episode of The Amazing Race reality tv show, the four final teams flew to Panama City, Panama.  First they boarded a boat for a ride along the Chagres River in total darkness.  First stop was an Indian village for tattoos and to spend the night in a hammock in the jungle.   Each contestant was branded with a tattoo of the word "San Francisco" which was their next clue.  Once they arrived at the towers, each had to walk a tight rope across the San Francisco Towers in order to get the next clue to stay in the race. 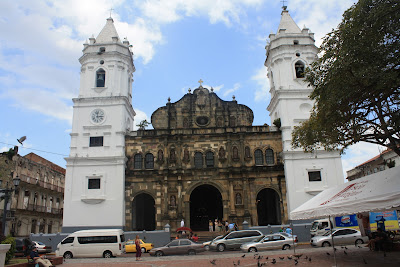 San Jose Church in Casco Viejo
A taxi ride to Casco Viejo was next where teams had to complete one of two tasks.  Either make a pair of custom, leather shoes for an actual customer, or shuffle through piles of fish at the fish market.  From there they had to watch some dancers perform in the square in hopes to discover a clue from what the ladies were wearing.  The clue "Panama Viejo" was embroidered on one of the dresses but was hard to decipher.  Another taxi ride and they arrived at the ruins of the old city, now known as "Panama Viejo" where they ended this leg of the race. 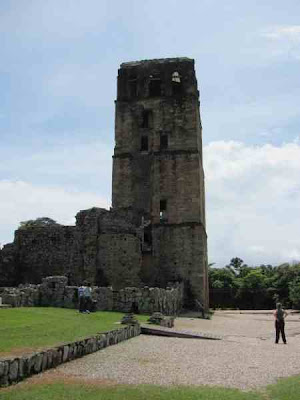 The Tower at Panama Viejo
How exciting to see all these places that we've been to on television!  We recently watched an episode of International House Hunters done in Panama that we had seen before we moved here.  It was much more exciting seeing it a second time after we've been to all those places.

Ok so that was the excitement of our day today.....seeing Panama on the big screen.  And we actually had to watch it on the little screen of the computer since we don't have network television shows here.  There is a version of the Amazing Race on tv here, but it's a Latin American version done in Spanish.


As night falls on our little casa, we bid you all a "buenas noches" or good night and see which way the coconut rolls tomorrow....along the gringo trail.
at December 04, 2011