All the drunks will dry out today since there are no alcohol sales anywhere in Panama in honor of All Souls Day, which is similar to Memorial Day in the states.  The decree to prohibit the sales of alcohol and suspension of all music and dancing makes for a quiet day here. This includes music in any businesses, supermarkets, stores, bars, clubs and anywhere else.  Those not in compliance with the provisions will be punished with fines ranging from $100 to $1,000.  Fortunately for us we have a full bottle of our good friend "Ron Abuelo" stashed away in a cabinet.  In fact it may go great with that "ron con pasas" (rum with raisins) ice cream that we have in the freezer.  Maybe that's why everyone is so laid back here since they put rum in everything, even ice cream.  But it does have raisins, although only a few, but since it is fruit it must make it healthier. 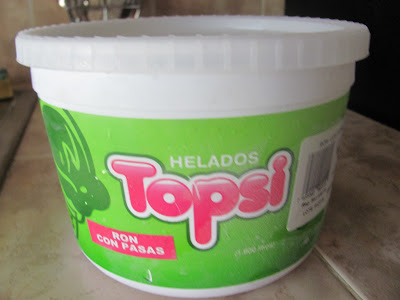 Ron Con Pasas
"Rum with Raisins"
Yesterday the silence of the afternoon was broken by the honking and yelling of a pickup driving around the neighborhood.  The back of his truck was piled high with teak rocking chairs with cane backs on them.  They looked well made and very nice, but we don't have room for one at this point.  Another day a man came by selling home made soups, and once a week the ice cream man comes by on foot.  It's impressive to see how Panamanians will do anything to make a few dollars. 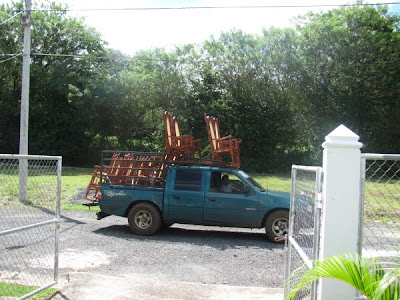 Yes they deliver!
Car washes or "lava autos" can be seen everywhere in Panama, and Capira is no exception.  Clyde took the car over today and was happy to just sit and relax while the young man washed the car.  For a mere $5.00 they wash the car outside and in, along with vacuuming the inside, cleaning the mats, dashboard and even washing the inside windows.  Clyde relaxed under a roof made of palm leaves and watched the world go by.  All he needed was a rum drink in his hand and a hot babe in a bikini nearby.  This hot babe was at home bustin' her butt on the Bow Flex working out. 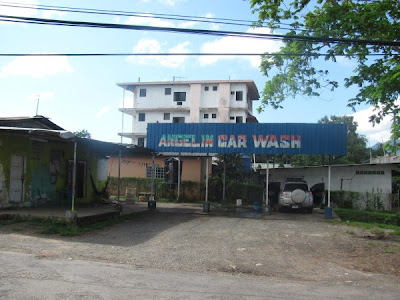 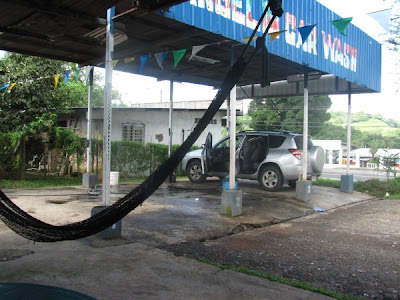 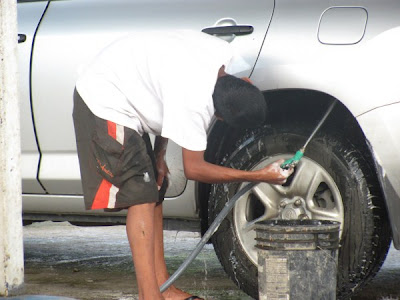 This young man is doing a much better
job than I would have done!
Clyde finished the little "writing desk" that we are going to put in our spare room.  It is his first attempt to make something out of the native teak or as they call it here "Madura de Teca".  He went ahead and left the natural curves on the wood to show off the beauty of the wood.  He also learned a new word yesterday.  He went to the local ferreteria and asked for paint thinner.  He was told it was called "tinner".  The young man went to the back and appeared with the "tinner" in a reused water bottle.  It did say tinner on it and I am sure if a little one got hold of it, he would only take one swig!  Also, he had very carefully looked up the word for paint brush "Cepillo de Pintura".  The kid looked at him like he was nuts......... and replied "Oh tu necisita una brusha!" (you need a brush). Live and learn!
The mighty painter just informed me that he was going to lay in the hammock and watch the stain dry on the desk.  But he did take some Spanish notes with him so he can pretend that he's studying, unless the snoring gives it away! 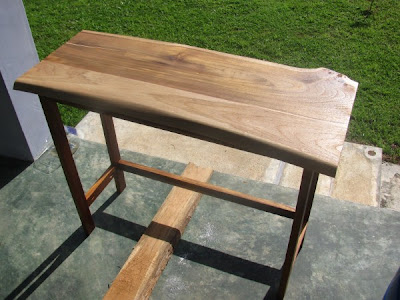 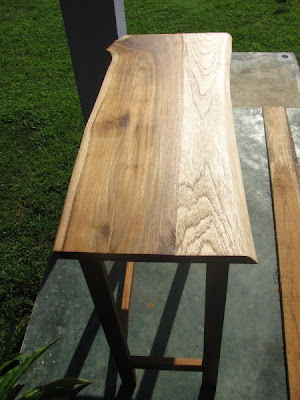 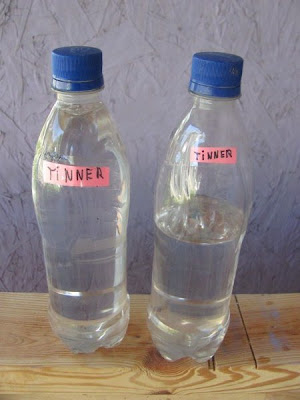 Paint "tinner"﻿
From what we hear the rest of the week will be filled with music, parades and much celebrating in honor of independence day along with other holidays for Panama.  In all the years that I lived in the U.S. Independence Day there is all about having a day off to get drunk and eat too much.  We'll have to wait and see if Panamanians view it differently than their gringo friends.  Not to worry, we plan to get out and explore and bring you all the news right here......along the gringo trail.
at November 02, 2011