The Drivers License Experience......part one

We have called Panama home now for two months, and after three months we are supposed to have a Panamanian drivers license.  Since everything takes longer here than in the states, we thought that we should start the process now.

First step:  take our current drivers licenses to the American Consulate for them to certify that it's authentic, fill out paperwork and pay $30.00.
Second step:  go to the Panamian Foreign Relations Office, fill out paperwork and pay $2.00
Step three:  have blood work done for blood type and fasting glucose at any lab, cost about $12.00
Step four:  Take all the stamped paperwork to the Driver's License Office pay $40.00, take eye test and hearing test and have picture taken.  Go home and know that we are legally able to drive in Panama for the next four years.

So today we started with step three first, since the blood work requires fasting, we stopped at local lab and explained what we needed.  After about an hour we were handed an official typed up letter that was neatly folded and put into an envelope. We anxiously opened it and it said "negative" for marajuana and cocaine.  What!!!  They did a drug test on both of us?  Apparently they didn't understand us and we didn't understand them due to the language barrier, so now we had to start all over again.  We both were skeptical when they handed us cups and showed the bathroom.  How was a urine sample going to tell our blood type?  I just assumed that they were doing urine for glucose and would do take blood for typing.  Wrong! 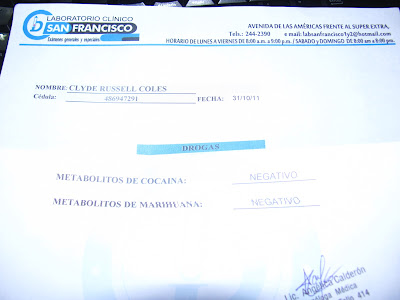 ﻿
Clyde was patient enough to try and explain again what we needed.  The first girl thought he was applying for a "commercial" driver's license and that requires drug testing.  Perhaps it will come in handy if we ever need to get a job driving a pineapple or banana truck around.

After another thirty minutes or more we were handed another envelope, and this time they got it right.  Our blood types and glucose level were listed in black and white, and we were free to go.  Since we were starving, we stopped at the first store we came to for a drink and snack.  By this time it was 11am and we were meeting someone for lunch, so that's as far as we got with the driver's license process for today.

And since November is a BIG holiday month here in Panama, many businesses will be closed for the rest of the week.  The following is a list of holidays in November only. 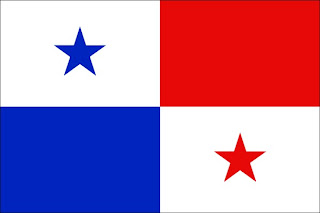 ﻿
All of the public buildings are draped with long red, white and blue flags.  Homes every where are proudly desplaying the Panamanian flags. From what we hear there will be celebrations everywhere with parades and other festivities.  Traffic coming home from Panama City was very heavy tonight as people are headed out of town for holiday. 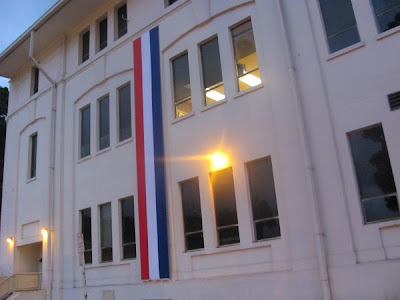 ﻿
Perhaps we'll take advantage of some of the festivities around tomorrow. We'll drink some local rum and become "honorary" Panamanians for the week. After all the country has welcomed us with open arms and are willing to take any money we'll send their way.
at October 31, 2011