As we sat waiting for the movers a small pickup truck drove up around 10:30 and then turned around, since we're on a dead end road, and then it stopped again. A Panamanian man carrying paperwork walked around the corner from the main road.  Clyde stepped outside and the man said "are you Clyde?" Just then a white unmarked truck turned the corner and the man directed them to our house. We had heard that someone from customs or immigration would show up at the house to go through the boxes.  The boxes had not even been opened.  But in Texas when the movers took the stuff they DID open every box to verify it's contents with the list on it, so perhaps that was enough valididation for immigration. 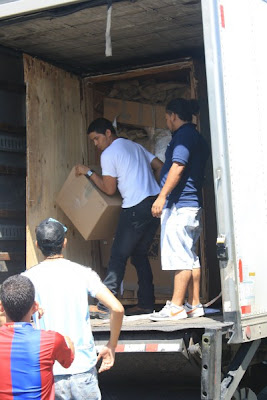 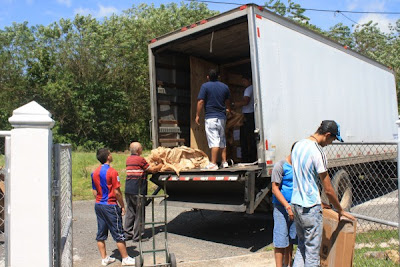 There were five men along with the man with the paperwork,  who seemed to be the boss of the crew. They said they'd be here between 10 and 11 am and here it was 10:30 which means that they were exactly on time.  Inside the moving truck were two wooden crates made out of particle board.  The men worked quickly and efficiently to get out stuff into the house.  The couch was well wrapped with heavy brown paper and plastic wrap on top. When they started to cut off the wrapping with a knife I cringed, afraid they would slit the leather.  But they were gentle and seemed to know what they were doing. 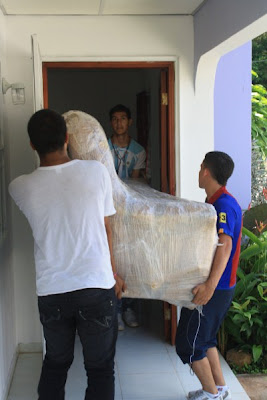 ﻿
The manager of the crew spoke some English and was delighted to hear that we spoke some Spanish.  At one point he told Clyde "tranquilo"....relax and take your time learning Spanish.  He said "you practice your Spanish on me and I'll practice my English on you." 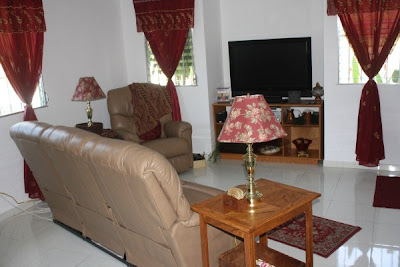 ﻿
While bringing in the couch they knocked over my new plant holder and broke the ceramic pots.  But everything arrived in good shape, at least from what we've unpacked so far. 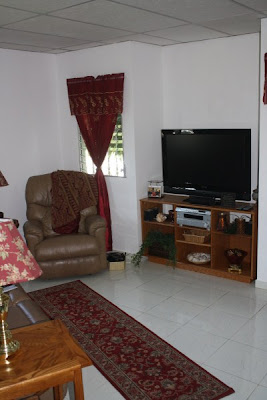 As they were picking up the mess of brown paper, plastic and other stuff outside they started to dismantle the wooden crates.  I said to Clyde "I bet you'd like to have one of those?"  He laughed and said "yeah right."  He said rather jokingly to the manager, "you can just leave that here."  The man said "you want one of those?"  Clyde said "yes" and to our surprise they left us a huge, wooden crate which we can use outside the house for storage.  It's about 7 feet long, by 7 feet high and about 4 feet deep and fits perfectly on the side of the house without even blocking any windows. 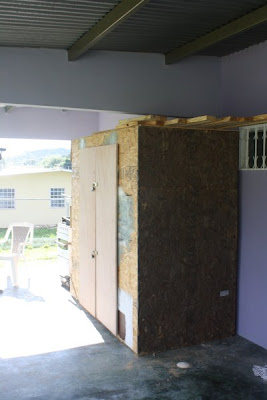 As soon as they left and Clyde located all of his tools, he ran to the hardware store to buy some wood and supplies to finish off this our new storage shed.
With this helpful new storage unit we can get some of the boxes out of the house.  Although it's pretty ugly now once he gets it done he will paint it to match the house so it will blend in.  Then he can put a lock on it to keep things inside safe. 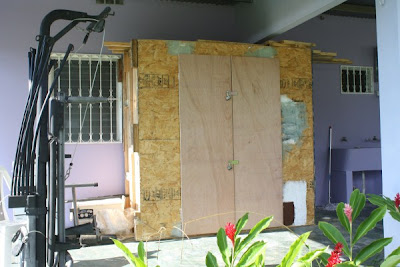 ﻿
﻿
So now the house feels more like a home with our familar stuff around. We still have much more to unpack and find a place for today, but things are going well.

Something else strange has been happening here at our house.  The automatic ice maker in the freezer has been making ice.  Let me explain.  We bought a new refrigerator the first week we got here and paid extra for an automatic ice maker.  Most of the ice makers on the fridge's here are not automatic. Water must be poured into the ice maker and then they make the ice.  We wanted to bypass that step and have the automatic type,  and since this model had that option we paid a little extra for one.  We had it professionally installed along with the other appliances. The installer told us to give it a few days and it would begin to make ice.  But it NEVER made even a single cube!  Clyde read over the book and did some troubleshooting.  He figured out that because our water pressure is so LOW that's why the ice maker wasn't working. So we've continued to buy ice until now.  The other night Clyde was standing in the kitchen and heard a strange sound from the fridge.  Low and behold it has spilled out a tray of ice into the holding container.  We don't know why it is that NOW it's making ice but we're happy that it is.  Perhaps that since everything else in Panama is slow, or on manana time.......the ice maker is too!

As we look at the mess of boxes filled with stuff we wonder why. Why did we bring all of this stuff, why did we keep all this stuff, why do we need all of this stuff.  But we all know that STUFF is the way we connect with our past.  Our stuff allows us to hold on to memories so we avoid throwing the stuff away.  But realistically we all know that even without the stuff the memories are buried in our hearts and cemented in our minds forever.
at October 23, 2011