Yesterday morning while blissfully blogging uncomfortably in my plastic lawn chair, the slats in the chair carving lines across my butt, and suddenly a truck pulled up.  It was a white pickup truck with a ladder sticking out of the bed. Two Panamanian men jumped out and yelled since the gate around the property was locked.  At first I panicked since I was indecently exposed having just gotten out of bed.  I ran to the bedroom yelling for Clyde to get up.  It was the air conditioner installers here at 7:30 in the morning.

For the past three Fridays we waited at home all day for them to show up. Every time they'd never call but would just not show up.  Clyde dreaded to call them but when he did there would always be some excuse like "they had car trouble."  Panamanians don't seem to understand the common courtesy of calling when they can't fulfill a committment.  We had to get our friend Betsy involved and they told her they would be here on Saturday.  To our surprise here they were, bright and early.

I ran to put on some clothes and brush my hair.  Since the air conditioner was going into the bedroom this was even harder since that's where they were.  I literally grabbed the first thing I touched and didn't bother with underwear.  I stayed out of the way and let Clyde deal with them.  They were effecient and thorough and finished in a few hours or less.  The service here seems to be good once they show up! 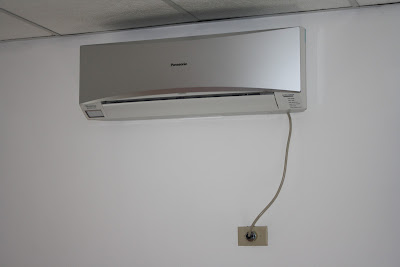 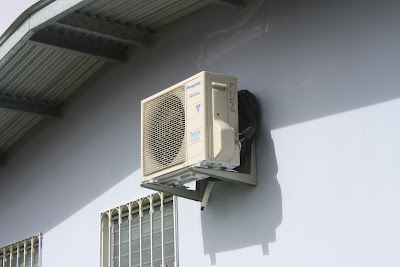 This is the "Split Type" of Air conditioner
found in a lot of foreign countries
﻿
After they were done we headed out to the big town of La Chorrera, which is said to be the second largest city in Panama.  We found a store we'd been looking for along with many more including a huge fabric store.  Clyde in his past would do upholestery and was impressed to see upholestery fabric for $1.99 a yard.  Most everything was $1,99 to $2.99 a yard with a few exceptions.

As we drove back to the house through Capira we took note of the town's center square. There is a covered pavillion that had chairs and tables setup, as if something big was about to happen.  While in the mercado picking up produce we saw a sign for BINGO and the date on the sign was 15 de Octubre.  On the way home we noticed a long line in the pavillion for the bingo game.  When they do something here in Capira they to do it big, and this was no exception.  All night we could hear music in the distance and around 11pm there was a explosion of fireworks.  Panamanians seem to love fireworks and it's not uncommon on any normal night to hear some go off both near and far.  They must sell them cheap here and I suppose it's safer since everything here is made of cement.

We nodded off last night comfortably to the sound of our new air conditioner.  I snuggled under the sheet and swore that we'd freeze to death, although it was set on 82.  We've become wimpy, warm weather people that whine, when we waltz into whirling waves of cool air in malls and stores.  Wishing a wreath of warm wishes, wrapped around our readers worldwide, until we meet again here along the gringo trail.
at October 16, 2011