All Roads Lead To Here....Where I'm Supposed To Be

One of the nicest things about being retired, is having time.  I realized this the other day while watering the flowers in the garden, something I'd never before done in my life.  Clyde has always taken care of the outside stuff back in Texas, since he had more time than I did. When I was working I'd get up at 4:30 am to be at the gym by 5:30 for a two hour workout.  I worked from 8:30 to 5:30, and made it home by 6pm to pack my gym bag for the next day.  Clyde and I had three hours to spend together before I fell into bed around 9pm.  On the weekend he usually worked one of the two days so we'd only see each other for one day.  Living the American dream doesn't allow for free time to spend with family and friends.

Having time now I've been able to re-visit some old enjoyable hobbies like writing which I had not done for many years.  People always told me they enjoyed getting emails from me, and before the internet I'd send long typed letters.  My Mom kept telling me to write a book, but I never had the time nor the subject matter. And besides who ever believes what their mother tells them anyway?

My teen years were spent in St. Aloysius High School in Jersey City, NJ, where I could butter up even the toughest nuns on writing assignments.  They encouraged me to pursue a writing career through journalism, which I later studied at Cedar Crest College in Allentown, PA.  I didn't enjoy college nor did I do well in journalism classes.  I had little interest in writing in a structured form being sure to add the who, what, where, when, why and how to every story.

During spring break from college that year I went back to work at Two Guys Department Store in Jersey City with my sister-in-law Debbie.  During senior year of high school I worked there, and whenever I'd come home from college, even just for a weekend, they'd hire me back.  There I met a guy that introduced me to a woman that worked for the Hudson Dispatch, a local county newspaper.   Hearing about my interest in journalism she hooked me up with the editor of The Paterson News, the sister paper to the Dispatch since she thought they had some openings.  After just one interview they hired me as a "gopher" which meant I would be doing research for reporters, typing obits, or helping wherever I was needed.  To my parents dismay, I decided not to return to college.

Within a few weeks of working at the Paterson News, the entertainment editor went out on sick leave and who was available to fill her position, but this new eager young kid.  Easily I transitioned into her position which entailed a daily page of wedding and engagement announcements; society notes along with a two-page weekend entertainment guide about happenings in the area.  The information came in the mail and all I had to do was re-type it, but the weekend guide gave me an actual "by line" which was exciting.  They soon were giving me simple articles to write in my spare time for more practice and more by lines.  Here I was only 19 years old, working at my dream job in a newsroom of a decent sized newspaper.

But being a rebellious teenager, about six months into the job I had the opportunity to travel to the other end of the country with friends, and since I wanted out of New Jersey I quickly went.  I spent a year in Idaho where I met my first husband.  Then we lived in Florida for a while where my daughter was born and eventually we spent 19 years in New Hampshire.  Looking for a warmer climate we moved to Silver City, New Mexico but since it was still too cold we moved again to Corpus Christi, TX.  Of course it was in Corpus Christi that I divorced the first husband and met my knight in shining armor.....Clyde.

So had I stayed in NJ and kept working for the newspaper, my life would have taken a different direction.  Perhaps I would have continued writing back then and made a living as a journalist.  It's funny how those little decisions we make in life can lead us down a totally different path. Each and every decision I made along the way, whether right or wrong,  helped make me who I am today.

One of the perks to writing this blog has been the hundreds of followers who faithfully support me by reading it. Some are interested in moving to Panamá and others are just living vicariously through us.  And since I write this from the heart, it allows readers to peek into my soul and get to know me personally.  It's always a pleasure to meet up with some of my readers in person when they're visiting Panamá.  Today we had yet another opportunity to meet some blog friends, Austin and his friend Phil who are vising from St. Louis, MO.  This was a first trip to Panamá for both of them, but unfortunatly neither of their wives could accompany them at this time.  They joined us along with hundreds of other expats in Coronado to hear journalist Don Winners speak.

Thanks to all of you that travel along with us, on each new adventure......along the gringo trail. 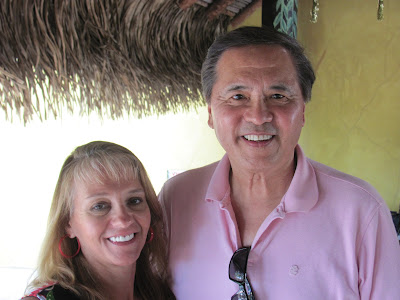 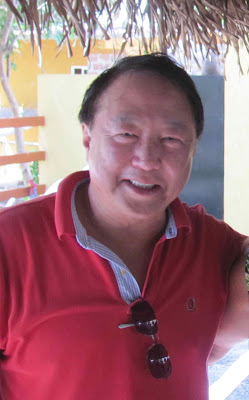 This is Austin's friend and traveling companion .
Neither of their wives were able to join them on this trip.
at March 01, 2012