Old school buses never die, instead they're shipped to Panamá and become "diablos rojos."  Translated as "red devils," these colorful old school buses are a dying breed.  During our first visit to Panamá the red devils peaked our interest with their colorful and outlandish displays.  Since the buses are independently owned, each driver has the freedom to design his bus the way he wants.  Graphics on the buses can depict religious beliefs, favorite cartoon characters, celebrities he'd like to meet, or the woman of his dreams.  Unfortunately I haven't seem my likeness on any of the buses yet, and since they're being phased out it's unlikely that will ever happen.

Although fun to look at, they drive like maniacs and pack in passengers like sardines.  It's not uncommon to see someone hanging out the door.  The diablos rojos are being replaced by government regulated Metro buses.  The new buses are air conditioned, handicapped accessible, and better equipped to accommodate the elderly.  Buses will be equipped with special computer software to regulate schedules and fares will be paid with rechargeable electronic cards. The new metro buses will offer qualified bus drivers a monthly salary, and will make them eligible for social security upon retirement.

The old "diablos rojos" will be sold to the Department of Education and turned back into school buses to transport children.  As it stands now, only the private schools here seem to bus the children. The kids that attend public school use public transportation or walk to and from school.

Panamá City is also in the process of putting in a Metro Subway system.  Once complete, however long it may take. it will hopefully decrease the amount of gridlock traffic in the city.

Just like old school buses, old Americans never die..... instead they move to Panamá to begin a whole new life.  In many ways we're just like the old buses, with a fresh coat of paint and a new outlook on life.  A fresh start, a new beginning, a willingness to venture into the unknown we roll on down the highway of life discovering new things.......along the gringo trail. 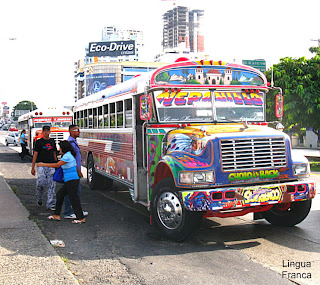 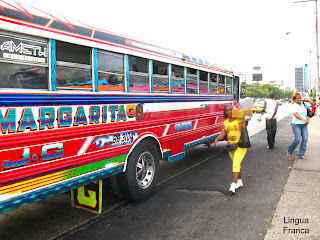 Notice the woman in yellow, a street vendor 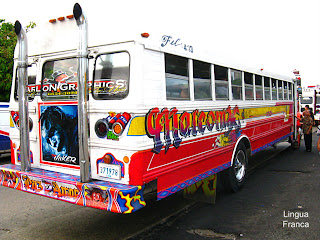 Large chrome exhaust pipes so they can be heard 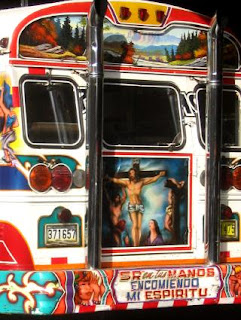 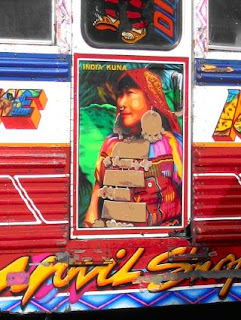 Picture of an indigenous woman 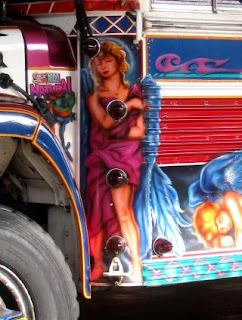 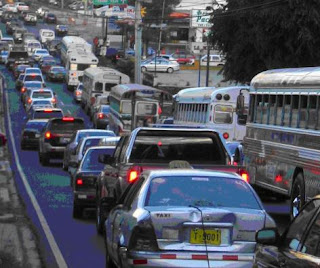