One of our favorite restaurants here in Panamá is Carlitos Pizza and Empanadas in the town of San Carlos.  Although it's a bit of a drive the food is always tasty and reasonably priced.  Usually full of tourists since it's directly on the Pan American Highway near the beaches, they offer menus in both Spanish and English.  Since Panamá is a Spanish speaking country, we refuse to ask for an English menu and usually manage to figure out what to order.  But with over 100 combinations of pizza the choices at Carlito's are overwhelming, so I let Clyde choose the pizza yesterday.  They also make great salads so I just had to order an "ensalada mixta" ....or mixed salad.....for an "entrada primera"...which is a first course. 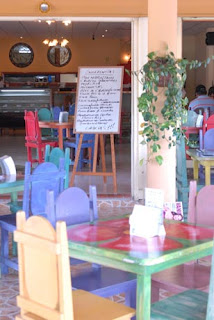 Nice atmosphere
The huge salad arrived first, only because we requested it that way.  A huge platter of "lechuga," "tomatoes," "cebollos," and "aceituna," .......translated to lettuce, tomatoes, onions and black olives.  It was wonderful once we added some white vinegar and olive oil, a delightful start to our meal.  A while later the pizza arrived and we both looked at it with scrunched faces, wondering what it was.  Clyde thought he ordered ham and eggplant and this appeared to be small hard boiled eggs with a glaze of what looked like flavored mayonnaise.  But since the egg-like rounds had no yolks, we had to think again. 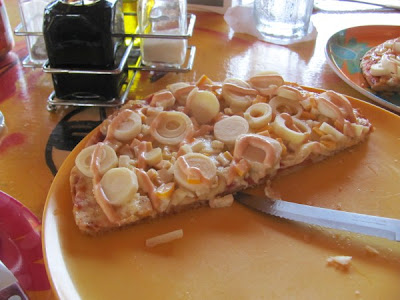 Hearts of Palm and Ham and Golf Sauce
Clyde summoned the waitress and asked in Spanish what these white, round things were called in English.  She sheepishly said "palmettas" but wasn't quite sure, so she went to get an English menu.  She opened the menu and pointed to the words "hearts of palm" which explained everything.  Although this was not what Clyde ordered, we ate it anyway. The flavored mayonnaise, known as "golf sauce" is also an Argentinian favorite.  Basically mayo with tomato sauce or ketchup added with various spices mixed in to taste.  The taste was a bit sweet and different and the ham was underneath the mozzarella.  Not something we'd order again, but not horrible either.
Carlito's also makes a fantastic chicken, spinach lasagna that sells for around $5.75.  Below is a list of pizzas with mozzarella, but they also have another list of pizzas without mozzarella, although pizza is not pizza without mozzarella to me.

The restaurant has been a labor of love for Argentinian master pizza maker Carlos Knuppel, who has over 30 years of culinary experience. Along with pizzas, salads and lasagnas, Carlitos also serves fresh empanadas, burgers, smoked pork ribs, pork chops, grilled chicken, steaks and home made desserts.

Another day of not quite knowing what we ate, but living to tell the story.  A few new words of Spanish to put in the vault, and another quirky mishap for two gringos trying to figure things out in this unknown land of Panamá......along the gringo trail.

PIZZAS WITH MOZZARELLA... (there's another list of pizzas without mozzarella)