Panamanian men are just like men every where when they see a woman walk by.  They practically break their necks trying to check her out, or crash vehicles when they look away from the road.  And you guys know it's true so don't try and deny it.

My first experience with Panamanian male rudeness happened a few months back, when I unknowingly walked around a hotel's roof top pool in a bikini, in the middle of the afternoon.  The men from a nearby high-rise construction site started yelling and whistling and practically falling off the building.  Most were probably young enough to be my son, but with my blond hair up in a pony tail and sun glasses covering the crows feet, they didn't realize that.  And since everyone knows men think not with the big head on top of their shoulders, but instead with the little head down yonder, they easily get in trouble.

And whenever I wear something that shows a bit of cleavage, all eyes go directly down when I walk by men.  I really don't know why us ladies bother to do our hair or wear makeup since men would rather just stare at our chests.  When we were going through Spanish school hell in the city a few months back, we walked to and from school everyday from the hotel.  Even walking with Clyde local men would stare at my chest as we walked by as if he didn't even exist.

Since I started walking the dog into downtown Capira we have to walk by a construction site.  Right along the Pan American Highway, it's noisy and I just thought they were coming out for a break or to check out my mean looking dog. It's hard to hear what they're saying with the noisy traffic and since my focus is keeping the dog in line and away from people walking by, I really don't pay the men much attention.  I didn't expect to be noticed being blond and fair skinned, as I just blend into the crowd.

But today on my way back home there must have been eight or nine men that stopped working, and walked to the street to watch us go by.  So I egged them on when I looked them in the face, smiled and said "buenos dias."  As I walked off I heard the whistles and comments like "muy bonita," just as the dog pulled on the leash and I gave it a tug to correct her.  Showed those guys that a strong dog needs a strong woman to keep her in line.  After all I've had plenty of practice keeping my husband in line, and when he's a good boy he even gets a treat.

A funny thing about men whistling at women with the typical "wolf whistle" as Clyde calls it.  The birds here mimic the same sound and we hear it frequently coming from the trees.  We even heard birds making the sound of squeaky toys, after the dog was playing with one outside.  We do have wild parrots, parakeets, toucans and more that could pick up people sounds and mimic them.  So perhaps when Clyde hears me say something derogatory to him, I can just blame it on the birds!

A few days ago while pulling out of a parking space in La Chorrera, traffic was heavy and Clyde backed into a taxi just slightly tapping his car. Clyde didn't even realize he hit the guy until I mentioned it.  The taxi driver got out of the car so Clyde got out and walked to the back of our car.  Two cops on the same motorcycle sat by watching as the taxi driver pointed to a slight scratch on his already dented vehicle.  Clyde said to the taxi driver "veinte dólars?" to which he shook his head yes.  I saw Clyde pull out his wallet, give the man a $20 dollar bill and off he went. The police watched the whole thing and then drove off, probably happy that they didn't need to get involved. Nothing like paying someone off right in front of the police, but this is Panamá! 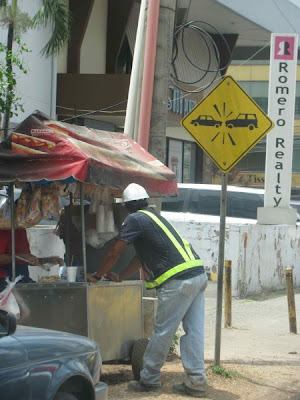 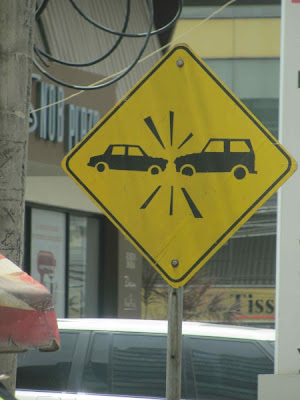 There are lots of them!
We should just get one for our car.....
﻿
Clyde has been checking our local bank account online to see if they took out the balance of the money for the house we're buying.  Today he realized that they did and sent a text message to our lawyer for her to follow up on the situation.  So we got the call around 11:30 today to be at the bank by 2pm today, so off we went.

Apparently I misunderstood what it was we were to pick up at the bank.  What we received was a letter stating that the money was in the account, and that we authorize the bank to give it to the seller after the final documents are ready.  After picking up the letter we were supposed to meet with the sellers again, along with our lawyer in front of a notary to sign the paperwork.  However since the seller was not available today, but will be available on Monday, we will make yet another trip into the city to meet with him and the lawyer to have the documents notarized. After this the lawyer will take the documents to the Department of Public Records for them to finalize all documents.  This last step should take about 2 weeks, at which time we will all meet again to sign the final documents.  At this time the seller will receive the full amount for the property and we will receive the keys to our new home.

So it's been another exhausting day of running to the city just to pick up one document. All this for another half of the next step to the house buying process, the other half to be continued on Monday, when we venture out again for more grid lock traffic.............along the gringo trail.
at March 08, 2012