Since we moved to Panamá six months ago we've discovered many different types of plants, trees and animals that we've never seen before.  Living in the tropics surrounded by lush rain forest we have the opportunity to see over 972 different species of birds alone.  Although I've never been patient enough for birding, just living here we've noticed a colorful array of unique birds while sitting outside. 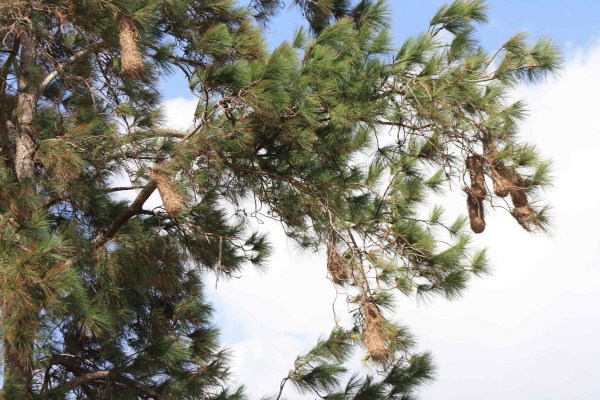 Over the past week of walking the dog I spotted a huge tree filled with tube-like nests hanging down.  It almost seems that a flock of birds stole the pantyhose off all the clotheslines, to form their own tube-sock like menagerie.  These jet black birds with bright yellow undercoating, sing an unusual mix of songs like I'd never heard before.  A mixture of fluting notes with cackles, wheezes and mimicry that resonates through the air in a melodious manner.  A colony of these birds can have up to 100 bag shaped nests dangling in the tree, which range from 11 to 17 inches in length and usually contain an active wasps nest for protection of the young. 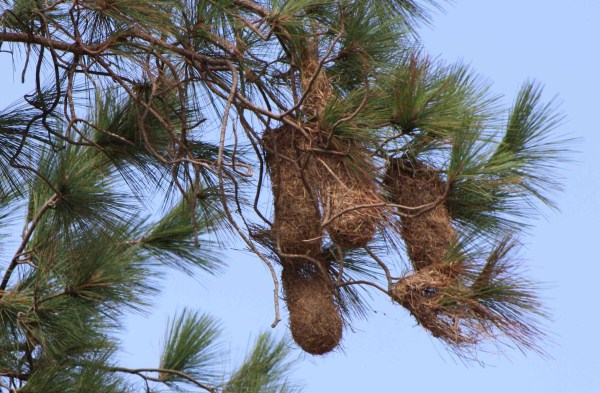 After a little research I discovered they are called yellow-rumped cacique.  These slim bird has a long tail, blue eyes and a pale yellow pointed bill.  It's plumage is mainly black except for it's bright yellow rump, tail base, lower belly and wing epaulets. 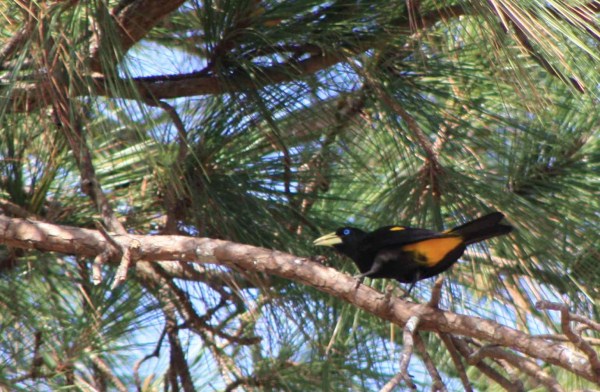 In Peruvian folklore this species is referred to as "paucar" which means "jaundiced ones" due to their vibrant yellow feathers.  According to an old folk tale, this creature began as a rumor spreading boy who always wore black pants and a yellow jacket. One day he pissed off an old women when he spread a rumor about her.  Unbeknownst to him, the women was a fairy in disguise who soon turned him into a noisy wandering bird adorned in black and yellow.  Since these birds are said to bring good news they are a welcomed neighbor.

Tonight Clyde ran out to take some pictures of the birds, who were not too cooperative but he still managed to snap a few photos.  It's nice to have time to stop and listen to the bird sounds, appreciate the sounds of nature, and enjoy ourselves......along the gringo trail.

Here's a link to hear the bird sounds.  Go to the chart and count down five lines to the post by Allen T. Cratier, Canopy Tower, Panama